Birding has truly become a great international hobby that seems to be growing and growing. It is very exciting to see so many young folk (here in South Africa at least) starting to take up birding with great passion and enthusiasm! When I travel to different parts of the world I invariably meet other young people who are crazy about birding in their own patches as well as wanting to travel to different parts of the globe to see new bird families and species. I knew on my upcoming trip that I would be seeing both new species and making a host of new friends, who could potentially join Birding Ecotours on another ‘birding-mad’ adventure! I set off from Pretoria, South Africa, to the United States, knowing that I would be attending the Space Coast Birding Festival in Florida as well as the San Diego Birding Festival in California a couple of weeks later. I had traveled to Florida the year before, but I knew that this trip was going to be much greater than I could ever have thought – my whirlwind birding adventure through the States was about to begin!

Once again the 2017 festival was a great success! Birding Ecotours has enjoyed attending this festival, meeting the local Florida birding experts, and making some good friends in the state.  The festival has field trips that go out each morning of the festival, led mainly by local experts as well as some of the tour company tour leaders who are attending the festival. We managed to notch up some excellent birds over the course of the festival. Some highlights included Limpkin, Short-tailed Hawk, Florida Scrub Jay, Clapper Rail, Red-cockaded Woodpecker, Brown-headed Nuthatch, Bachman’s Sparrow, Painted Bunting, Great Horned Owl, and the wonderful Snail Kite! 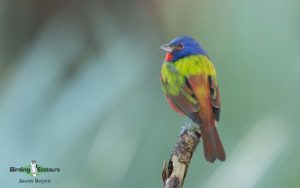 We also managed to get to Blue Spring State Park one morning to finally lay eyes on the weird and wonderful manatee! No less than fifty manatees were ‘blobbing’ around in the shallow waters. 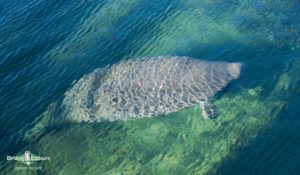 Florida really does have a lot to offer, and it makes for a brilliant birding holiday (see our 10-day Florida Peninsula and Florida Keys birding tour). We were lucky enough to spend an extra week in the state after the festival – this allowed us to travel south to the Miami area and the Everglades as well as the Gulf coastline. The birding was great, and highlights in the first couple of days included Bananaquit, both Smooth-billed and Grove-billed Anis, Yellow-breasted Chat, White-crowned Pigeon, Buff-bellied Hummingbird, Burrowing Owl, Scissor-tailed Flycatcher, and a couple of tricky Florida species such as Long-tailed Duck, Common Eider, Purple Sandpiper, Neotropic Cormorant, Black-throated Grey Warbler, and Swainson’s Hawk. 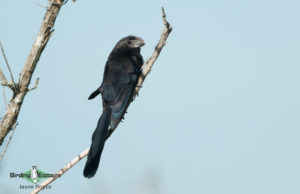 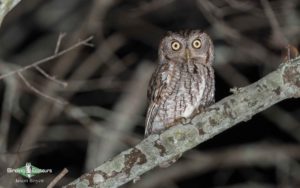 Other personal highlights from Florida were the shorebird species that were so confiding; one was able to get really good looks at a family of birds that are truly remarkable. Snowy as well as Wilson’s Plover were truly great! 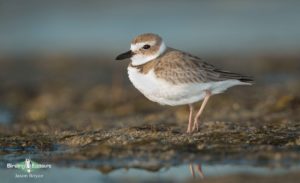 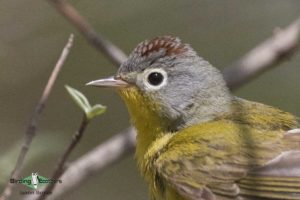 From here I traveled north to Cape May, stopping at a couple of spots along the way. North Carolina as well as Washington D.C. were two of these stops. Other than a first-ever chipmunk and Winter Wren, lifer things didn’t ‘heat-up’ until I bumped into a massive flock of Snow Geese, along with a few Ross’s Geese in Maryland on the way to the Cape May ferry. There were in excess of four thousand Snow Geese, including a couple of ‘Blue Geese’, one of which can be seen in the below picture.

Cape May birding as well as a very windy (understatement) morning at Barnegate Lighthouse State Park produced some really amazing species – some that I have dreamed of seeing for many years! Sea-watch was good; we spotted all three local scoter species, Black, White-winged, and Surf Scoters. We also had the amazing privilege of seeing a Razorbill fly over the breakers. A Pink-footed Goose also made an appearance for a couple of weeks, and we were lucky enough to connect with that too. It is always a pleasure to meet up with old friends and past tour participants when traveling, and on this trip I was invited to stay with many friends that I had made over the years. Traveling to Colorado was an absolute pleasure with the beautiful snow-capped peaks of the Rocky Mountain Range as well as a host of new bird species! American Dipper, American Three-toed Woodpecker, all three Rosy Finches, Prairie Falcon, Canyon Wren, Long-eared Owl, Scaled Quail, and many more all ended up at the other end of my binoculars and camera (not to mention North American porcupine and Gunnison’s prairie dog)! 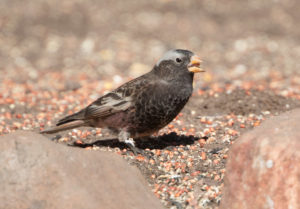 Of course it would be an absolute treat to join a full Colorado ‘grouse’ trip during the spring lekking season. On this trip we see the likes of Gunnison Grouse, Sage Grouse, and Sharp-tailed and Dusky Grouse as well as Steller’s Jay, Clark’s Nutcracker, and both species of Prairie Chicken at leks. A birding trip made of dreams! 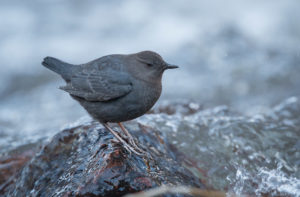 From Colorado I traveled south to New Mexico, where I stayed one night before moving on to Arizona. It is widely known that southeast Arizona can offer some of the best birding in the world. I was there to experience first-hand some of it for the first time in my birding career. I stayed in the small town of Patagonia for a night before moving on to Tucson. Both the Patagonia-Sonoita Creek Preserve and the famous Paton Center for Hummingbirds produced some pretty special species for me. Watching hummingbirds hover around feeders and almost literally ‘teleport’ to and fro was an absolute pleasure! Violet-crowned Hummingbird was a treat, as too were Vermilion Flycatcher, Lazuli Bunting, Gambel’s Quail, Curve-billed Thrasher, Rufous-winged Sparrow, and the stunning but bizarre Pyrrhuloxia. 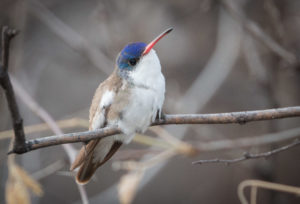 The next two birding sites in Arizona were Madeira and Florida Canyons. These spots were just great! I picked up a host of new species at both sites and also made a couple of new friends. Birders and wildlife enthusiasts in general get along so well, and it definitely makes for an enjoyable experience when you have like-minded company. Madeira Canyon produced three species that I had wanted to see ever since I picked up a Sibley Guide to Birds. I heard them calling from the drier, scrubby flatlands before heading up into the canyon and soon managed some awesome views. Cactus Wren was the first, Magnificent Hummingbird and Painted Redstart were the other two. The hummingbird only showed briefly but for long enough to take my breath away, while the redstart showed so well that I managed to rattle off a good few pictures – what a bird! 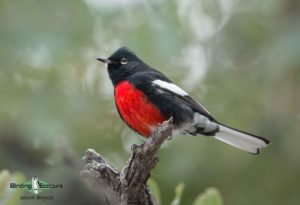 In addition to the beauty of the canyon trails and the snowy hillsides the birding was on point. Acorn and Arizona Woodpeckers cruised by, while a bit of searching yielded Olive Warbler, Hepatic Tanager, and Bridled Tit. Florida Canyon was almost as good and delivered a female Elegant Trogon! This is a species that is pretty sought-after in the United States. We were happy, to say the least! Other good birds in this area were Black-chinned Sparrow, Yellow-eyed Junco, and Hutton’s Vireo. Birding Ecotours offers a southeast Arizona trip that covers all of these sites in addition to Mt Lemon, Sierra Vista, and the incredible Grand Canyon! To read more about that trip see here. 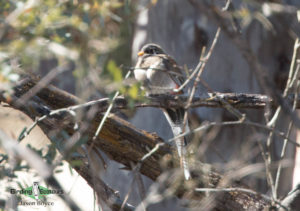 Up until now I had traveled through eleven states, and I was on my way to just one more to complete my trip for this year. California and the San Diego Bird Festival were just around the corner – well, sort of. There was definitely birding to be done before I got to San Diego! I picked up a vagrant Rufous-backed Thrush as well as Bendire’s Thrasher before traveling past the Salton Sea and locating a group of wintering Mountain Plovers on some plowed fields.

This was the first time that Birding Ecotours attended this birding festival. California is the state with the highest species list, and the county of San Diego has one of the highest lists of all counties. So not only was the birding excellent, but the fair itself was also very enjoyable! The field trips were successful (including the pelagic trips), the food was as good as ever, and good birding relationships were formed! It was a pleasure to meet so many folk from California (and further afield) during the fair, many of which are already doing many international birding tours. We look forward to welcoming some of them on our tours in the future. The coastal birding in San Diego was excellent, and connecting with some of the local species didn’t take too much effort. Some of my favorites were Long-billed Curlew, Surfbird, Black Turnstone, and the stunning Heermann’s Gull. Other local birding was also brilliant, and species such as California Thrasher, Wrentit, California Towhee, and Allen’s Hummingbird were thoroughly enjoyed. 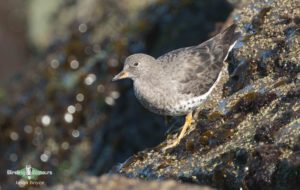 I was fortunate to have the opportunity to give a talk while at the birding festival, and I was pleased to see that a good many people came to listen to me speak. My talk (called “Birding with Birding Ecotours”) was an introduction to our company and the international birding tours that we have led over the past twelve-odd years as well as what we currently have to offer. It was excellent to introduce Dr. Chris Lotz in addition to all the brilliant full-time guides we have leading tours in different parts of the globe.

A couple of notable counts: We saw nearly all possible species of thrasher on the trip, except the elusive Le Conte’s Thrasher, and 26 species of Sparrows/Towhees, including all six Towhees. A remarkable 70 families were recorded across 12 states, and I managed to notch up 351 species in about 34 days. I can’t wait until the next time! 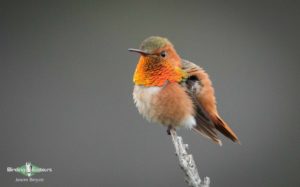