The Famous Birding Cruise to Nowhere – Flock at Sea 2017

“GREY PETREL COMING DOWN PORTSIDE FROM THE BOW” were the words blasting through the miniscule speaker on the guides’ radios. This was of course followed by a stampede of eager, adrenaline-driven birders all running and jostling against the railings on the portside of the luxurious cruise liner, the MSC Sinfonia, in an attempt to lay eyes on the now careering and highly-sought after procellariid. All of a sudden cries of “there it is!” began to echo from decks twelve to six at the stern of the ship, interspersed with cheers of joy, crisp high fives, and the machine-like shutter clicks of many a camera, as ‘trigger-happy’ birders tried their best to capture the moment, and, most importantly, the bird, in all its rarefied glory.

If you had said to me at any time before the 24th of April 2017 that almost two thousand birders crammed onto a single cruise liner would all simultaneously experience some of the best pelagic birding to have ever been experienced in our waters, I would have answered you very skeptically, in fact I would have thought you completely mad. It is thus only understandable that the first hour and forty minutes experienced on our first morning’s birding in the deeper oceanic waters almost 140 nautical miles south of Cape Town left me speechless and shaking thanks to levels of excitement only ever experienced previously when Disney announced the creation of a new Star Wars movie. Quite frankly, it was probably one of the best days of birding I have ever experienced in all my ten years of birdwatching.

Each year BirdLife South Africa hosts their Annual General Meeting in a different part of our absolutely gorgeous country, and each year they choose to highlight the birds and birding in that area, which inevitably sees birders from far and wide ‘flock’ to this meeting of like-minded, driven, and passionate birders, whether it be to partake in the AGM itself, participate in the bi-annual ‘Learn About Birds’ conference, or simply enjoy the biodiversity to be found wherever the event may be. Only once before has BirdLife South Africa taken this event to the deep blue, and that was back in 2013, when the congregation of birders, scientists, and general members of the public headed north along the West Coast of South Africa, from Cape Town to Walvis Bay in Namibia and back again. It was such a success that four years later they decided to do it again. However this time there was a twist: majority control over the MSC Sinfonia, a custom-designed route tailored specifically for the best birding in our sub-region’s waters, chumming, and the ability to specify which evening would have chocolate mousse and which wouldn’t (jokes aside, though, this dessert needs to be made mandatory for further dinners on the next Flock at Sea). It took years of monthly meetings and negotiations with the MSC head office, but they eventually came to the party, the bird party that is, much to the excitement of the South African birding community.

So what was all the hoo-hah about a customized, birding-specific route? Besides the facts that the waters off the coast of South Africa, particularly off the Western Cape, are arguably some of the best waters in the world for pelagic birding, next to New Zealand and Australia, and that some incredible species are to be seen in their hundreds when finding a fishing trawler on your ‘average’ day trip, there were gems that lay waiting in the deeper waters, mouth-watering specials which rarely come into the trawling grounds but prefer the upwelling and colder waters along the continental shelf. This is the edge of the southern African sub-region and the beginning of the world-renowned southern oceans, which carry on due south to the icy continent of Antarctica.

There is nothing more rewarding for us guides to witness the facial expressions of eager, first-time pelagic birders the moment they lay their eyes on their first albatross. On pelagic day trips out of Cape Town this is generally a species of the genus Thalassarche which makes an early appearance, either a Shy or Black-browed Albatross, both of which are considerably smaller than the biggest of them all, species of the genus Diomedea, or the ‘Great Albatrosses’. One can therefore imagine the pleasure we got from showing these eager, new pelagic birders their first-ever albatrosses, and not just any albatross, but a good five or so Wandering Albatrosses of varying ages, which had been following the ship since first light – heart-stopping stuff!

It wasn’t long after the Grey Petrel sighting, and most certainly long before our adrenaline levels were able to stabilize to a normal rate again, when the call of “Sooty Albatross” echoed across the stern, immediately triggering the violent swinging of heads, one or two cases of potential whiplash from said violent neck-swinging, and vigorous scanning until the bird came into view, showing off all of its chocolate-brown glory. 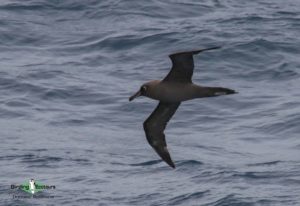 However, it would seem that Mother Nature had not yet finished her scheduled delivery of avian specialities, because within a matter of minutes after admiring the Sooty Albatross the call of “White-headed Petrel” came through on the guide’s radios. Personally, this was one of the Pterodroma species I had most wanted to see, and I know that my friends and colleagues, Dylan Vasapolli and Jason Boyce, who were both guiding on the boat, likewise ranked this as a bird they desperately wished to see. The bird performed exceptionally well, and we all managed absolutely jaw-dropping views of it. 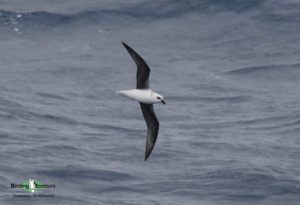 When we thought that our day simply couldn’t get any better, all of a sudden somebody screamed a question which had previously only been spoken of in legends and fables and one which stopped the hearts of a good few hundred birders as the suspense rose and the bird got closer to the stern: “Hang on, is that a Light-mantled?”. The light coloration on the bird’s back in contrast to the rest of its chocolate-brown body was what had us all going, but as it came closer we were able to make out the thin, pale-blue line on its lower mandible, and, all of a sudden, as if in unison, the stern of the ship with a good three hundred birders present erupted into cheers of joy and jubilation as we feasted our eyes on the Light-mantled Albatross’s natural beauty. We were sitting with mouths slightly agape and the breath knocked out of us as if we were in the twelfth round of a pay-per-view boxing match, and although not many will admit it, there was a lot of drooling going on… This surely had to take the spot for ‘bird of the trip’! 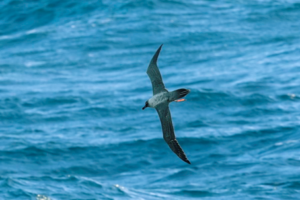 The first day most certainly set the bar high, but the following two days didn’t disappoint either, with highlights including Black-browed, Indian and Atlantic Yellow-nosed, and Shy Albatrosses, both Northern and Southern Giant Petrels, Soft-plumaged, Great-winged, and White-chinned Petrels, Sooty, Cory’s, Great, and Manx Shearwaters, Black-bellied, European, and Wilson’s Storm Petrels, Antarctic and Salvin’s Prions, Subantarctic Skua, and several groups of Arctic Terns making their way north – a list most definitely indicative of the incredible birding that the southern oceans have to offer!

Reflecting back on this incredible experience as a whole – the gorgeous sunsets, the great food, the opportunity to share birding tales from across the globe with like-minded folk, friends, and colleagues, and the comradeship among all in attendance – was an intangible vibe that we won’t be forgetting in a long time.  It was an absolute privilege for the folk from Birding Ecotours to be a part of this event, one which has proved to undoubtedly have been one of the best pelagic trips to be had in our waters in a very long time! It was even more of a privilege for us to share with those on board our love, passion, and enthusiasm for sea birds and pelagic birding as a whole, and we thank BirdLife South Africa for this incredible opportunity and the great work that they are doing to conserve our world’s seabirds!

This, however, does not mark the end of our pelagic adventures! Birding Ecotours has been running pelagic day trips out of Cape Town for some time now, and we would love to have you join us on one of them to experience with us this “whole new world”, to quote Disney’s Aladdin. You can view more at 1 day Pelagic trips.