Guatemala may not be high on every traveler’s radar when planning a birdwatching trip, but the country holds fantastic birding highlights and is shrouded in a mysterious, cultural allure. And though it falls in the shadow of more established places like Costa Rica and Panama, it certainly deserves to be mentioned in the same sentence. Guatemala City is an easy three-hour flight from the southern United States.

What does Guatemala offer that you can’t get in those other popular and often-touted countries? First and foremost is its intriguing bird life. Guatemala holds a nice array of endemics, and it shares regional endemics with southern Mexico, Nicaragua, Honduras, Belize, and El Salvador. Species like Pink-headed Warbler, Horned Guan, Wine-throated Hummingbird, Cabanis’s Tanager, Yucatan Poorwill, Ocellated Turkey, and about 30 others are most easily seen in Guatemala. 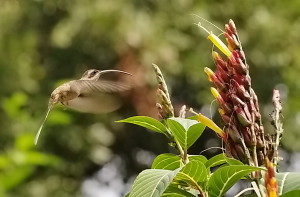 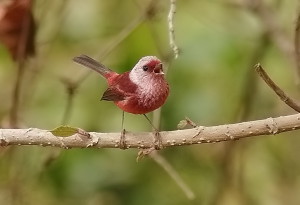 A central chain of volcanic mountains dominates southern Guatemala, and many of the cloud forests and pine-oak forests on these peaks harbor some fantastic birds. A large number of the lower slopes are given over to coffee plantations, but most of the higher peaks are richly forested.

To the north, the region of Petén borders the Yucatan peninsula, making for a great suite of humid-forest bird species. Sprawling within Tikal National Park are the city remnants of one of the largest and greatest central American civilizations, the Maya. Here their temples reach up towards the sky and peek above the forest that now encapsulates them, making for a unique birding and historical setting, where you can find parrots, toucans, and oropendolas among towering temples and ancient buildings.

The descendants of this huge civilization still persist today, with 22 dialects of the Mayan language still spoken. There are also some amazingly beautiful lakes, like Atitlán and Petén Itzá. Atitlán, surrounded by towering volcanoes, and Petén Itzá, surround by humid forest, both make for very scenic birding. The largest market in central America also lies in the highlands at Chichicastenango, where local traders bring their wares to sell at the weekly market.

There are established birding routes, and the country is keen to expand its birding clientele. The Guatemala tourist board, Inguat, stands behind the matter, and local fincas are being encouraged to preserve habitat for birds. Shade-grown coffee is becoming more prevalent, which is a boon for migrant species. Together with the Guatemala Bird Watching Roundtable they have come out with a guide for some of Guatemala’s top birding hotspots. All this will lead to more birding tourism, and hopefully soon Guatemala will be included as a full member in the same birding conversations as other Central American countries.