How to distinguish between Cape and Spotted Eagle-Owls

By Jonathan Pepper and Chris Lotz

Out in the field, and under the low light intensities that owls are seen in, Cape and Spotted Eagle-Owls can easily be, and often are, confused with each other. We have put together a quick and easy identification guide that will help you recognise the differences between these two species when you are out in the field.

Arguably the most important feature is that the Spotted Eagle-Owl invariably has fine barring on its front, at least on its lower breast. The Cape Eagle-Owl, on the other hand, has large blotches all over its front that extend right down to its lower belly, and it lacks the fine barring of the Spotted.

The above pictures clearly show the difference in blotching vs. barring of the two species. And, if you look closely at the pictures alongside, you can see that each of the Cape Eagle-Owls feathers have only one blotch at the bottom of each feather while those of the Spotted have several bars running across each individual feather.

Other differing features are the size of the birds themselves (Cape Eagle-Owl being larger) and the size of their feet. The Cape Eagle-Owl has much larger and stronger feet compared to the Spotted Eagle-Owl, but these two features are definitely not reliable in the field. Size is often difficult to estimate and there is also individual variation, and in fact overlap, between the two species. Take a look at our photo (from the World of Birds) of both species sitting together and ask yourself whether you could honestly say Cape Eagle-Owl is a larger bird, when seen at 50 meters in the partial darkness, also noting that there is a lot of individual variation within each species (with males also being smaller than females)! 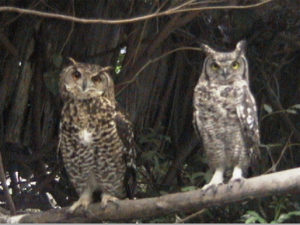 The white patch that is evident on the Cape Eagle-Owl (left) is only so apparent after the bird has been calling, and is, in fact, present in both species.

Many field guides state that one of the most distinguishing features between the two is the eye colour, i.e. that Cape Eagle-Owls have orange eyes and Spotted Eagle-Owls have yellow eyes.

Eye colour can actually vary within both species. 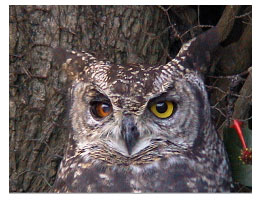 The Spotted Eagle-Owl featured here, from the World of Birds in Cape Town, has one orange and one yellow eye (this may be due to eye damage). 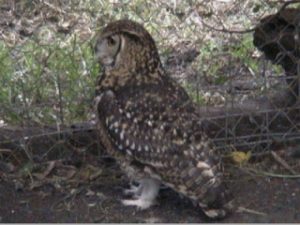 Typical view of the Cape Eagle-Owl when sighted in the wild (the back end!) although it is under better light conditions and much closer. Look straight for the belly just visible here to see whether it has the fine barring or the blotches! 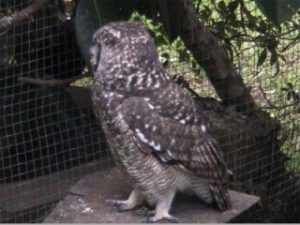 Similar view of the Spotted Eagle-Owl for comparative purposes.

Cape Eagle-Owls appear to have more distinct and evenly placed white markings on the wings, but this is not a reliable identification feature as it differs between individuals. 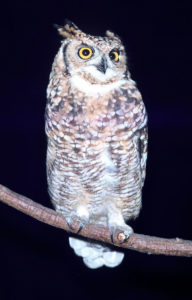 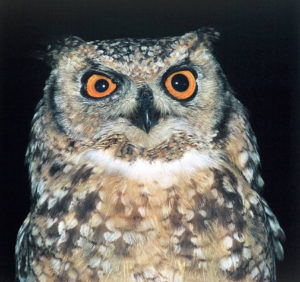 The Cape Eagle-Owl also has a distinctly different call, whereby it places emphasis on its first hoot, followed by two softer hoots. Apart from the lower belly blotching versus fine barring, the only reliable feature that we are aware of for differentiating the two species is the call. During the build-up to the winter breeding season, especially between December and June when they are calling the most, Cape Eagle-Owls can quite easily be told from Spotted Eagle-Owls by their call. 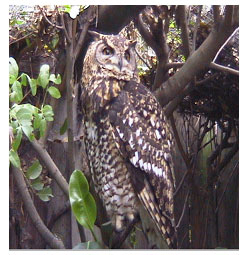 We are collecting data as part of an ongoing Cape Eagle-Owl project. If you happen to spot a Cape Eagle-Owl in the field, please do get in touch with us via e-mail. Data we wish you to include in your email is an accurate-as-possible location of the bird, the date, how you correctly identified the bird, habitat you saw the bird in (fairly accurate), time of observation and degree of light, what the bird was doing (flying, sitting on boulder, etc.), if seen in pairs or singly, or if with youngsters, etc. If seen fairly close to the Spotted Eagle-Owl then an accurate as possible recording of the distance between the two and how many Spotted Eagle-Owls you saw compared to the Cape Eagle-Owl in reasonably close proximity. If you happen to see anything out of the ordinary, then please feel free to include any information in your e-mail. Most importantly, please be 100% sure it is a Cape Eagle-Owl. If you are uncertain, you can still e-mail us, but tell us you are uncertain. You can also tell us if you see the same bird more than once in the same location, but inform us of this in the e-mail. We are also very interested in any sightings you may have of the rufous form of the Spotted Eagle-Owl.

Birding Ecotours sometimes organises non-profit owling trips to raise funds for owl conservation. We run these conservation birdwatching tours quite often, but we also arrange Owls of the World® birding tours worldwide (e.g. Peru, where we look for Long-whiskered Owlet, Buff-fronted Owl and a host of others), India, Southern Africa and more.