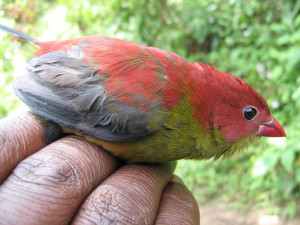 When asked the question “what is Africa’s most elusive bird species”, most birders would answer that it must be any of the flufftails, which are, of course, notorious. Or perhaps they might answer that it could be one of the two pitta species lurking on this continent. But, given a systematic approach, it is actually quite possible to find and even photograph every single flufftail species, given a few weeks of travel across Africa and Madagascar. Even the critically endangered Slender-billed Flufftail can be reliably seen with a bit of effort. As for the pittas, they certainly aren’t in any way easy, but we usually do find both species annually; our success rate for African Pitta in Mozambique and Green-breasted Pitta in Uganda must be about four in five attempts. At the start of the breeding season we have exact stakeouts for these jewel-like species, and so we’ve kind of “mastered” them, and they no longer escape us.

Fewer birders would guess that the bird that we simply can’t find is a splendidly-colored finch occurring at extremely low densities in a tiny part of central Africa. While local birding guides in Uganda report the species every couple of years, there are only two known photos of it. And we have never found one on any of our tours yet (despite the fact that we do marvelously well on all the other rare and localized species in the region). The finch we are talking about is the Shelley’s Crimsonwing (Cryptospiza shelleyi), an Albertine Rift Valley endemic with a total world population estimated at anything between 2500 and 10000 mature individuals.

The Albertine Rift is a westward branch of the famous Great Rift Valley, and it boasts a large number of endemic bird species occurring only in a tiny part Africa where four countries meet: Uganda, Rwanda, Burundi, and the Democratic Republic of the Congo (DRC). The beautiful and spectacularly bio-diverse, forested mountains of the Albertine Rift straddle the border regions of these four countries. Shelley’s Crimsonwing is one of these Albertine Rift endemics skulking in the undergrowth of the mountain forests here. The DRC is a dangerous place to visit, and most birders focus on either Rwanda or Uganda when they want to find this rare finch. (But find the bird they don’t…!)

Classified as vulnerable by BirdLife International, Shelley’s Crimsonwing is so poorly-known that scientists do not even have much of an understanding why it is so rare, and why it is apparently declining (also with very fluctuating numbers from year to year). The guess is that habitat destruction by humans is the main culprit, but it has also often been said that the species might be declining due to natural causes, albeit mysterious and puzzling ones!

Where to look for it:

Why not join us in August 2019 to look for it? For details, kindly see: