Many people know of the immense Brazilian Amazon with its astonishing biodiversity. Some people might know about the highly endangered Atlantic Forest that once stretched across much larger sections of the Brazilian coast than it does today. However, even within Brazil, very few people are aware of the cerrado: a fascinating biome of vast grasslands, lightly wooded savannas, and ribbons of gallery forest growing along winding rivers. As one of the world’s most biodiverse tropical savannas, there are approximately 10,000 plant species in the cerrado. It also supports the greatest variety of large mammals in all of South America, including such iconic species as the stilt-legged Maned Wolf and tube-nosed Giant Anteater. By birding the spectacular landscapes of the inland state of Minas Gerais we hope to encounter a large selection of this special avifauna as well as these two mammals and our main target, the Critically Endangered (IUCN) Brazilian Merganser. 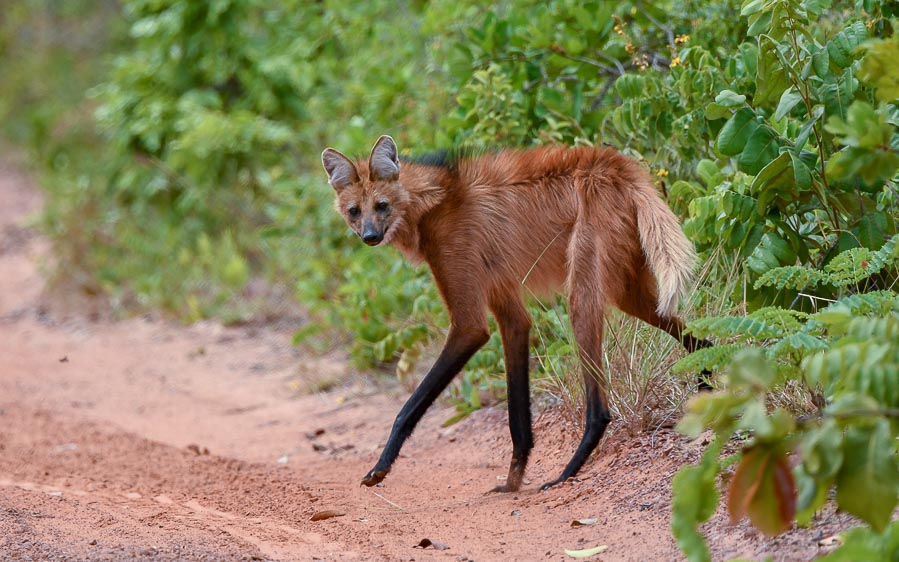 The strange-looking Maned Wolf should be seen at Monasterio do Caraça (photo Riccardo Boschetti).

Our trip begins at the scenic Serra da Canastra National Park. The main focus here is finding the near-endemic Brazilian Merganser, a specialized denizen of clear-water streams and one of the Western Hemisphere’s most critically endangered birds. In addition, the rolling grasslands, wooded savannas, and gallery forests are home to an excellent assortment of range-restricted species, such as Brasilia Tapaculo, Golden-capped Parakeet, Cock-tailed Tyrant, Firewood-gatherer, Black-masked Finch, and, with some luck, the elusive Maned Wolf and the most-wanted Giant Anteater. 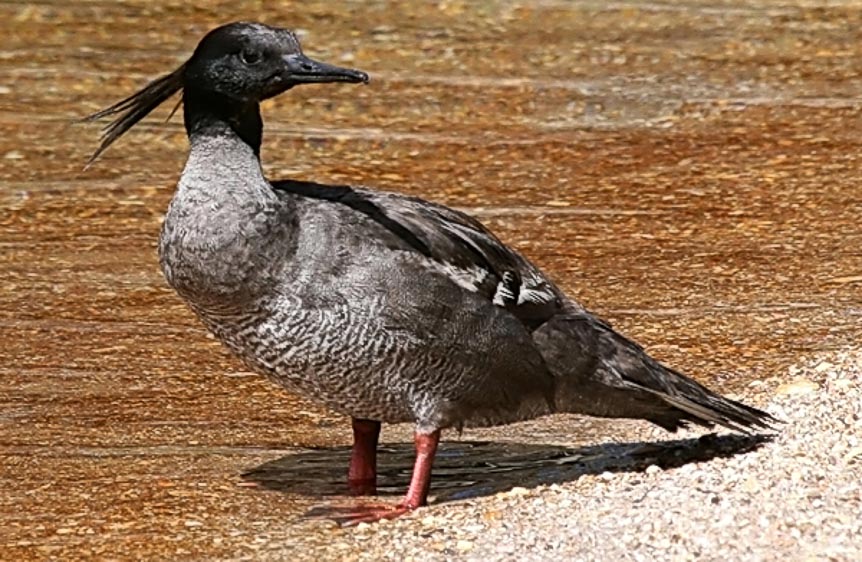 Brazilian Merganser is one of our targets on this trip (photo © Prof. Sávio Freire Bruno (CC BY-SA 3.0)).

Next, the Serra do Caraça lies on a transition zone between the drier cerrado and verdant Atlantic Forest, providing an interesting mix of birds from both habitats, such as Gilt-edged Tanager, Serra Antwren, Surucua Trogon, Blue Manakin, and Swallow-tailed Cotinga. However, the main attraction here is the nightly appearance of Maned Wolf at the monastery. 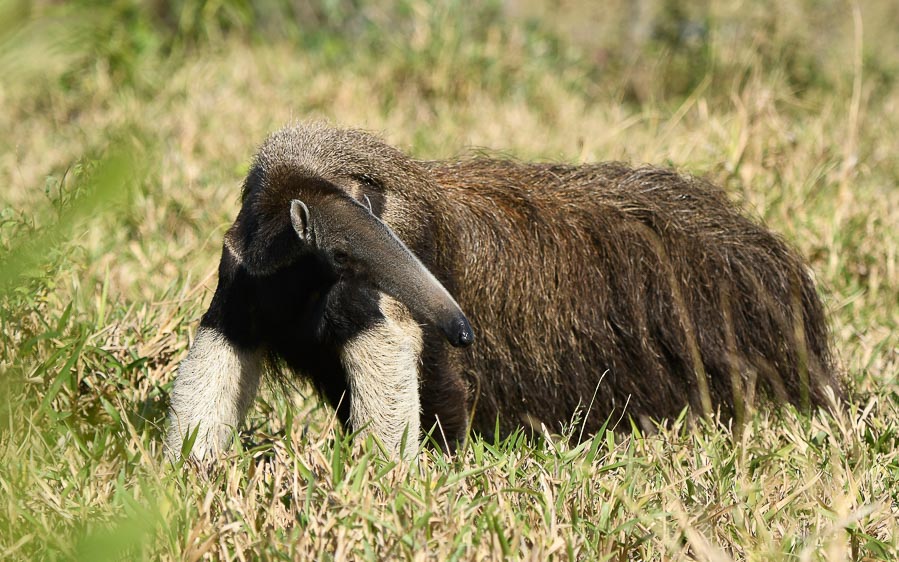 Our last port of call is Serra do Cipó National Park, a location renowned for its spectacular gorges and waterfalls. The rocky grasslands found in the higher elevations of this park are home to a highly localized set of Brazilian endemics: the spectacular Hyacinth Visorbearer, the demure Cinereous Warbling Finch, and the recently described Cipo Canastero. Our trip ends back in Belo Horizonte.

You will arrive at the airport and be transferred to your hotel in Belo Horizonte.

This is mostly a travel day. After an early breakfast we drive to the town of São Roque de Minas for arrival in the afternoon. This picturesque town will be our base for exploring Serra da Canastra National Park and its environs for the next three-and-a-half days. We will spend the afternoon birding around the town of São Roque de Minas to begin familiarizing ourselves with many of the common bird species of inland Brazil, including Toco Toucan, Campo Flicker, Golden-capped Parakeet, and Cinnamon Tanager. Feeders in the nearby town of Vargem Bonita usually hold a fantastic assortment of hummingbirds. White-vented Violetear, Planalto Hermit, and Swallow-tailed Hummingbird regularly attend these feeders; however, the true star here is the endemic Stripe-breasted Starthroat, a specialty of the drier interior of Brazil.

Occupying over 700 square kilometers (172,973 acres) in Minas Gerais, the magnificent and remote Serra da Canastra National Park preserves a stunningly beautiful expanse of prime cerrado as well as the headwaters of the São Francisco River, the longest river lying totally within Brazil. Most of this park consists of a high plateau that rises abruptly from the surrounding countryside. This plateau harbors seemingly endless open campo grasslands, dotted with an innumerable number of termite mounds and crisscrossed by several streams lined with low, bushy gallery forest.

These grasslands support a rich and diverse set of specialized birds, many of which can only be found in Brazil. The skulky Brasilia Tapaculo creeps around in the low, gnarled forest found along streams. Patches of brush and scrub hold the cute and endemic Grey-backed Tachuri. Red-legged Seriema, South America’s answer to Africa’s Secretarybird, often patrols the grasslands in pairs. The endearing Cock-tailed Tyrant flutters over areas of tall grass with a flight profile reminiscent of a toy airplane. Campo Miner prefers recently burned areas, while tall, wet grass can harbor Tawny-bellied Seedeater and Black-bellied Seedeater. The tops of termite mounds will always be worth a check, as birds like the vulnerable Black-masked Finch and the unique Firewood-gatherer often perch on them to curiously survey their surroundings. 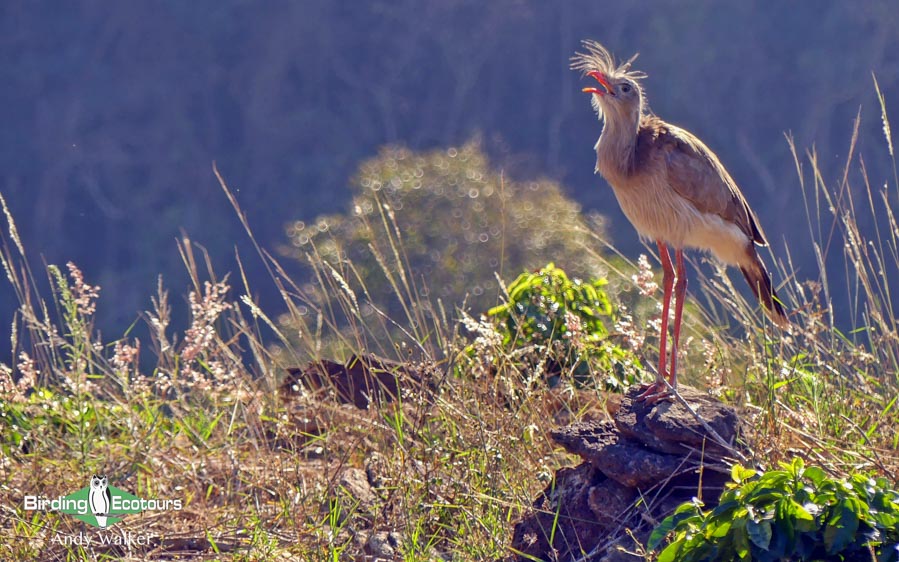 Red-legged Seriema can be seen in the grasslands of Serra da Canastra National Park.

Several rivers cascade over the escarpment into the lower elevations of Serra da Canastra National Park, creating spectacular waterfalls, behind which Great Dusky Swift nests. The forests lining the rivers at the lower elevations are wet enough to support a variety of birds more typical of the wet Atlantic Forest, such as Gilt-edged Tanager, in addition to widespread gallery forest species such as Pin-tailed Manakin, Blond-crested Woodpecker, and Toco Toucan. Lightly wooded savannas predominate in drier areas away from the rivers, harboring several delightful endemics, such as Golden-capped Parakeet, Rufous-winged Antshrike, and Collared Crescentchest.

Of course, any birding trip to Serra da Canastra must include a dedicated search for the elusive Brazilian Merganser, one of the most critically endangered birds in the Americas with an estimated population of less than 250 birds. As the highest-priority bird of this tour, we will allot an ample amount of time to persistently scan all stretches of river throughout Serra da Canastra for this enigmatic duck.

Day 6. Transfer to Monasterio do Caraça

After a final round of early morning birding at Serra da Canastra National Park we make the long trek to the Monasterio do Caraça. Maned Wolves make an appearance every night at this hilltop monastery in search of food scraps purposefully laid out for them. This tradition began in 1982, when the priests began putting out meat for the wolves to keep them from raiding their trash cans. 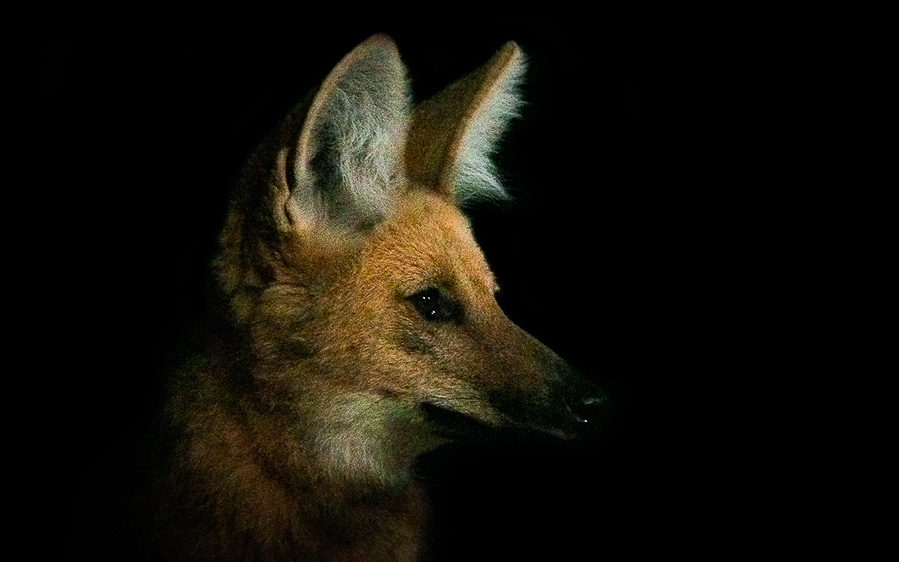 Day 7. Birding in the morning in Serra do Caraça, transfer to Serra do Cipó

Today we will be looking for Blue Manakin, Dusky-legged Guan, Surucua Trogon, Pallid Spinetail, and White-breasted Tapaculo. The forest surrounding the Monasterio do Caraça has an eclectic mix of birds from both the drier cerrado and wetter Atlantic Forest. Our main target here is the endemic Serra Antwren, although a wide variety of birds such as Hyacinth Visorbearer and Swallow-tailed Cotinga are possible. After lunch we make the short drive to Serra do Cipó National Park, famous for its incredible rock formations and majestic waterfalls. 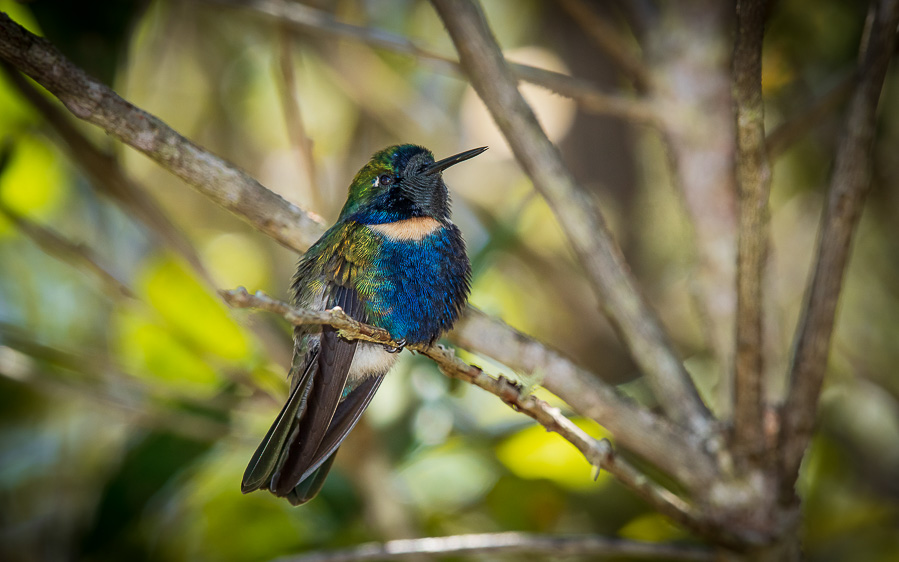 Rugged Campos Rupestres montane savanna grasslands dominate the upper elevations of Serra do Cipó National Park, supporting an exceptional and highly endemic flora adapted to poor, rocky soils. Although diversity is low in this challenging habitat, the birds that occur here are very special. Only recently discovered in 1985, Cipo Canastero, an inhabitant of rocky outcroppings, is our main target here. Flowering bushes may attract two stunningly beautiful hummingbirds, the endemic Hyacinth Visorbearer and the near-endemic Horned Sungem. Other species we specifically target during our stay at this national park include Cinereous Warbling Finch, Blue Finch, Coal-crested Finch, and Serra Finch.

After some early-morning birding around Serra do Cipó for any misses from the previous day we drive back to Belo Horizonte, where the tour ends. 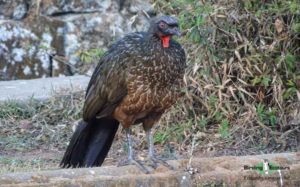 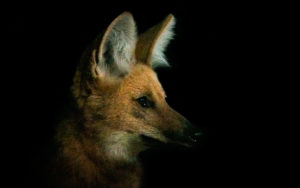 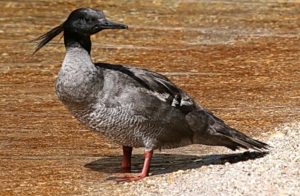 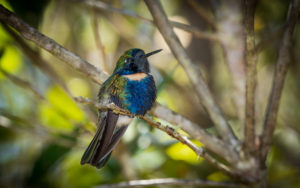 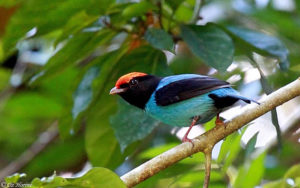 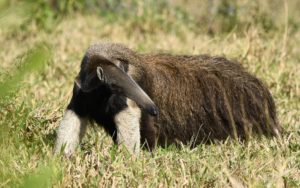 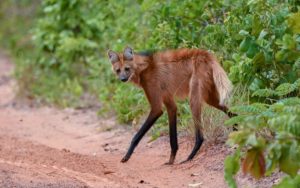 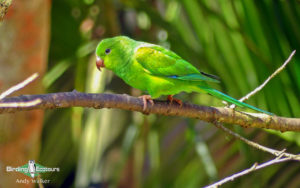 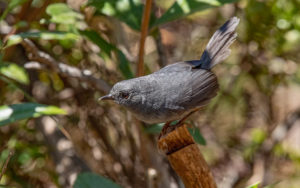 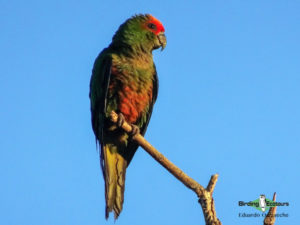 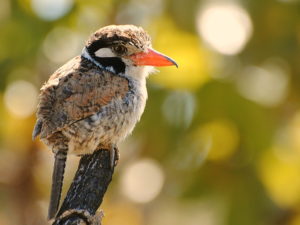 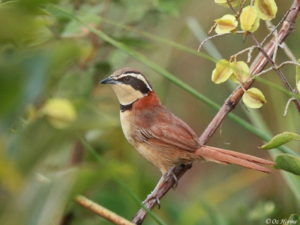 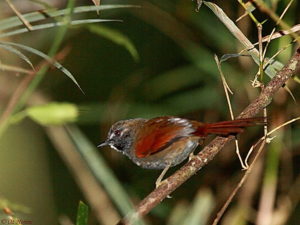 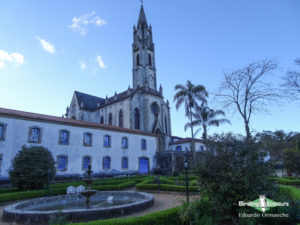 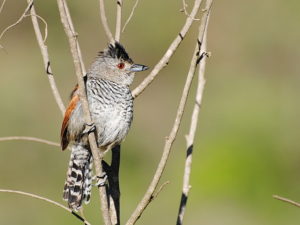 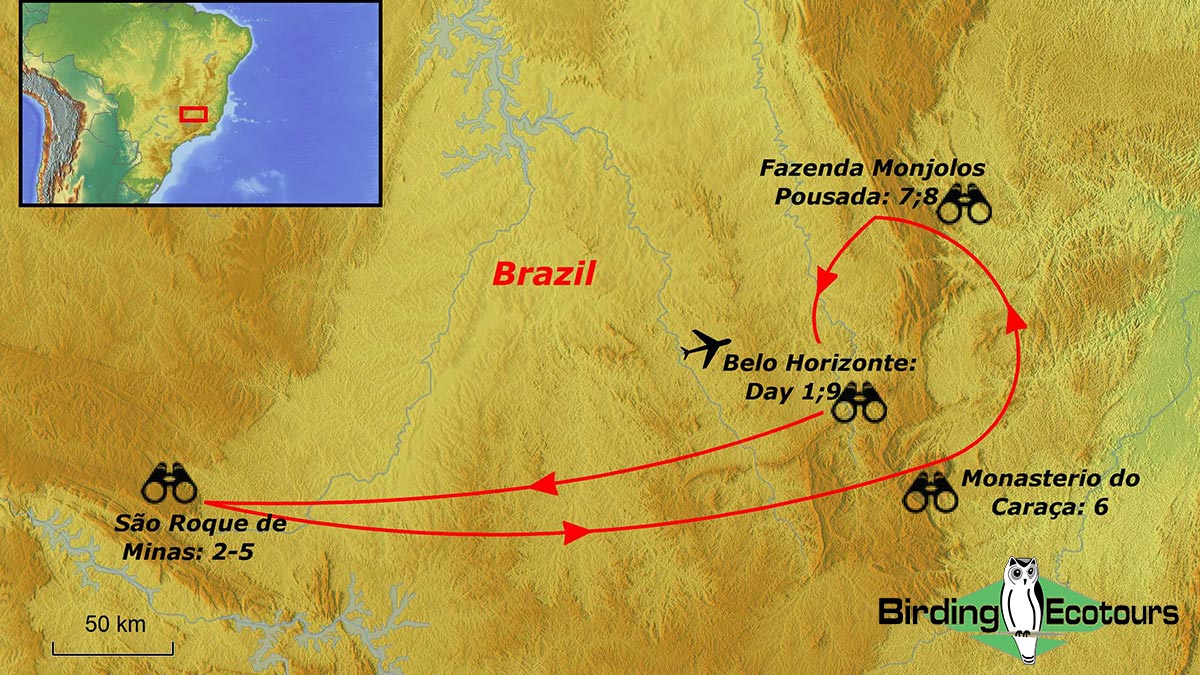 ‘I was fortunate enough to be able to add an extension on to the Best of Brazil Pantanal and Atlantic Forest 2019 trip.  The extension took me on a visit to the Cerrado habitat in Belo Horizonte state and then to the border of Brazil and Argentina to the famous Iguazu Falls. I did the extension as a private tour with Eduardo Ormaeche as tour leader. I would definitely recommend a private tour if it is within your means as the beauty of seeing the enigmatic Maned Wolf at the monastery of Caraça. In addition to the Monastery and Maned Wolf, Eduardo did a fantastic job at finding all the birds of note in the area. Iguazu Falls was truly beautiful. It is a very busy area though with many tourists from both Argentina and Brazil coming out for day trips, but there are so many lookouts and viewing areas that one can see the falls from many angles and get some wonderful photographs. The Great Dusky Swift are around the falls and Eduardo was able to find the perfect viewing spot to watch them nesting. It was a trip well worth remembering and recommending.’