Taiwan not only has great avifauna but also a host of other winning points that make it a wonderful destination for a comfortable birding trip. With 27 endemics, many endemic subspecies that could be split, and all its migrants and widespread Asian birds because of Taiwan’s position on the East Asian-Australasian Flyway there’s stacks to look forward to. Taiwan is located 100 kilometers/62 miles east of the coast of China, south of Japan and Korea, and north of the Philippines. Less than 400 kilometers/248 miles long and 150 kilometers/93 miles wide, with rugged central mountains and deep valleys, it boasts a very high biodiversity – in a very manageable package.

This tour focuses on the endemics and other East Asian specialties in Taiwan’s well-protected forests. Most of our time will be spent in the mountains, but we will also allow some time in the lowlands and at the coast, looking for wetland birds. Orchid Island (Lanyu) has several interesting birds. When circumstances allow we will leave time for other aspects of nature, for the fascinating human culture, and for chasing any reported notable vagrants.
The weather should be generally dry and pleasant, but with a chance of showers and cold at the highest points. Photo opportunities are good.

The Taiwanese are a very friendly and welcoming people. They have blended the best parts of unspoiled, traditional Chinese culture with the influence of colonial Japan along with the native Austronesian culture. Taiwan is free and democratic, has good infrastructure, and is considered safe.

Focus: Birds, but also a bit of other aspects of nature and human culture.
Grading: Easy walks on good surfaces. Good photo opportunities.
Climate: From comfortably warm in the lowlands to cool or even cold at the highest points.

This ‘Birding Tour Taiwan’ experience can be combined with one or more of our three China tours: China: 9-day Yunnan Pre-tour, China: 18-day Sichuan, and China: 15-day Qinghai extension for a once-in-a-lifetime Asian mega tour.

On arrival at Taipei airport we will make full use of the evening light to explore a farming and coastal area very near the airport. As well as hoping to encounter things more exotic, here we will familiarize ourselves with some common lowland species such as Light-vented (Chinese) Bulbul, Red Turtle (Red Collared) Dove, Spotted Dove, Long-tailed Shrike, late-passage Brown Shrike, Black Drongo, Oriental Skylark, Plain Prinia, Yellow-bellied Prinia, Japanese White-eye, and various wagtails and munias.

With some work we may find Crested Myna among the more common Javan Mynas. This may also be our first chance to run into the local subspecies of Crested Serpent Eagle, Silver-backed Needletail, and Pacific (Fork-tailed) Swift.
We then travel to our well-located hotel. Tonight, after birding and dinner, those with an interest will have an option to explore Taiwan’s lively night-market and Taoist-temple scenes.

This will be our first opportunity to find low-elevation forest birds. Wulai is a stronghold for some birds trickier elsewhere, such as the magnificent Taiwan Blue (Formosan) Magpie, Maroon Oriole, Taiwan (Formosan) Whistling Thrush, Plain Flowerpecker, Varied Tit, and Silver-backed Needletail. The valleys here are home to many altitudinal migrants and to raptors such as Besra and Grey-faced Buzzard. Mandarin Duck (proper native ones) can sometimes be spotted. Transient Grey-streaked and Ferruginous Flycatchers are also to be watched for.
Transfer to a Central Taiwan Hotel

We spend three days in the renowned Dasyueshan National Forest nearby, moving from subtropical lowlands to coniferous temperate mountains at over 2,000 meters/6,500 feet. We stay in the comfortable cabins at Anmashan for two nights.

The first big birding highlight is usually Swinhoe’s Pheasant. While waiting for the right one to show we should be entertained by White-tailed Robin, Steere’s Liocichla, and red-bellied squirrel. A nearby hotspot may have Island Thrush and your first views of the abundant White-eared Sibia and Taiwan Yuhina. Asian House Martin can be found nesting under a bridge close by.

The main target in the forests above our cabins is the graceful Mikado Pheasant. While staking them out along the road, the very confiding White-whiskered Laughingthrush and Formosan striped squirrel will pose for you. Nearby we will be on alert for White-browed Bush Robin and the smart Collared Bush Robin. As we get into hemlock and dwarf bamboo forest at the highest points we will meet the distinctive local version of Spotted (Eurasian) Nutcracker as well as Brown-flanked Bush Warbler, Yellow-bellied Bush Warbler, Taiwan Bush Warbler, and White-browed Shortwing.

Mixed flocks will hold the local crested version of Coal Tit, Green-backed Tit, Yellow Tit, Black-throated Bushtit (Tit), the cute Rufous-faced Warbler, Collared Owlet, and Fire-breasted Flowerpecker. The excitement of a mixed flock often also attracts familiar birds such as Eurasian Nuthatch and Eurasian (Winter) Wren. The views here are breathtaking; in the distance we will have views of Taiwan’s highest peak, Yushan, which is just short of 4,000 meters/13,000 feet.

The excellent Trochodendron and pine forest around our cabins is often the best place for Ashy Wood Pigeon, the local sub-species of Eurasian Jay, Rufous-crowned Laughingthrush, and Brown Bullfinch, and a local waterfall is home to Little Forktail.

After dinner we will be looking for the endemic subspecies of Tawny Owl as well as for two scops owl species and the charismatic White-faced flying squirrel. Taiwan serow and Reeves’s muntjac may also be encountered. In the mornings it is usually fun to search  the grounds around our accommodation. The secretive Taiwan Partridge and the tiny Taiwan Wren-babbler are worth the extra effort to find them.
In the evening of Day 5 we return to the western lowlands and drive to the fishing town of Dongshan, just south of the Tropic of Cancer, and our hotel for the night.

With an indigenous culture that is closer to that of the Philippines, Lanyu is a nice contrast to mainland Taiwan. We take a two-hour  ferry from Taiwan’s southernmost point. Whistling Green Pigeon, Philippine Cuckoo-Dove, Brown-eared Bulbul, Japanese Paradise Flycatcher, the endemic subspecies of Elegant Scops Owl (“Lanyu Scops Owl”), and Lowland White-eye can be expected, as well as other passage passerines.

On the way there and back we will look for Bulwer’s Petrel, Streaked Shearwater, Black-naped Tern, Little Tern, and Brown Noddy, as well as for dolphins and flying fish.

Today we will focus on finding breeding Fairy Pitta and Malayan Night Heron as well as better views of lowland forest species.

We return to the mountains for more views of Taiwan Barwing, Yellow Tit, and Taiwan (Taiwan Hill) Partridge, as well as  any species missed at Dasyueshan. We will keep a lookout for raptors such as Crested (Oriental) Honey Buzzard, Crested Goshawk, and Japanese Sparrowhawk. Black Eagle and Mountain Hawk-Eagle are sometimes encountered. Summer visitors include Large Hawk-Cuckoo and Himalayan Cuckoo. Bunting, flycatcher, and pipit species are possible.

In the evenings we will hopefully get views of Mountain Scops Owl and Collared Scops Owl and maybe Savanna Nightjar, the local subspecies of Brown Wood Owl (“Himalayan Wood Owl”), or giant flying squirrel.

In the secondary forest our targets will be Rusty Laughingthrush, Dusky Fulvetta, Chinese Bamboo Partridge, Common Emerald Dove, White-bellied Green Pigeon, and Black-necklaced Scimitar Babbler. We may catch up again with Black-naped Monarch and Snowy-browed Flycatcher.

We then drive to the highest road pass east of the Himalayas at over 3,300 meters (about 10,800 feet) in search of Alpine Accentor, Taiwan Rosefinch, and Taiwan Fulvetta in the junipers and rhododendrons. Dropping down from the alpine-like areas, in the pine trees we will be on the lookout for Grey-headed Bullfinch and Flamecrest. The heather-like bamboo will give us more chances of Golden Parrotbill and Taiwan Bush Warbler.

We will allow time today to make a visit to a coastal promontory on the north coast for uncommon Eastern Palearctic visitors such as Japanese Robin, Bluethroat, Siberian Rubythroat, and Chinese and Japanese Grosbeaks – as well as for more-run-of-the-mill Blue Rock Thrush and Pacific Reef Heron. We will also survey the rocky shore for Chinese Egret and Grey-tailed Tattler. The tour ends on return to Taipei. 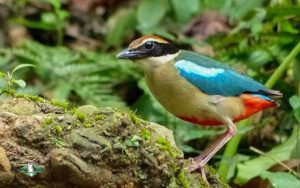 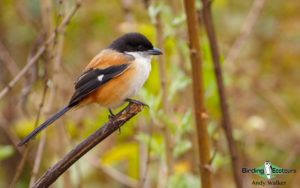 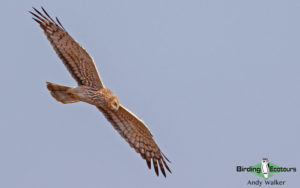 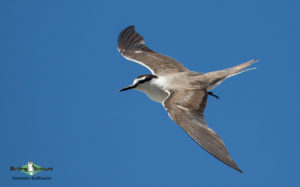 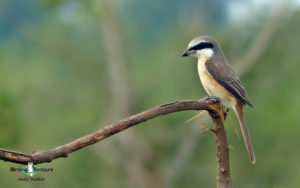 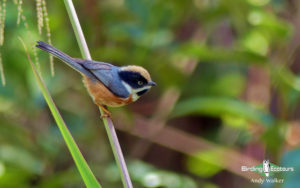 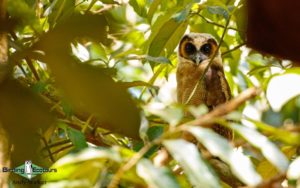 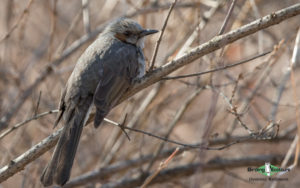 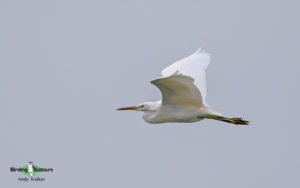 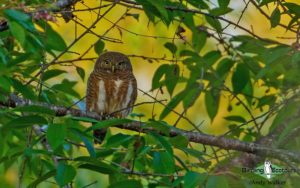 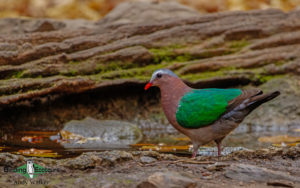 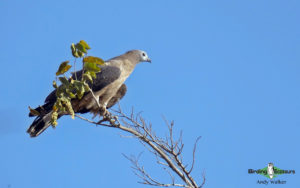 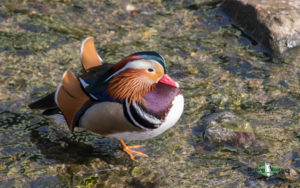 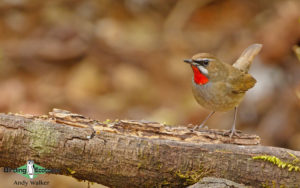 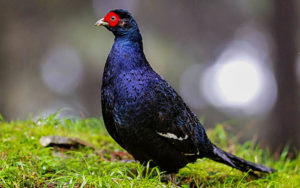 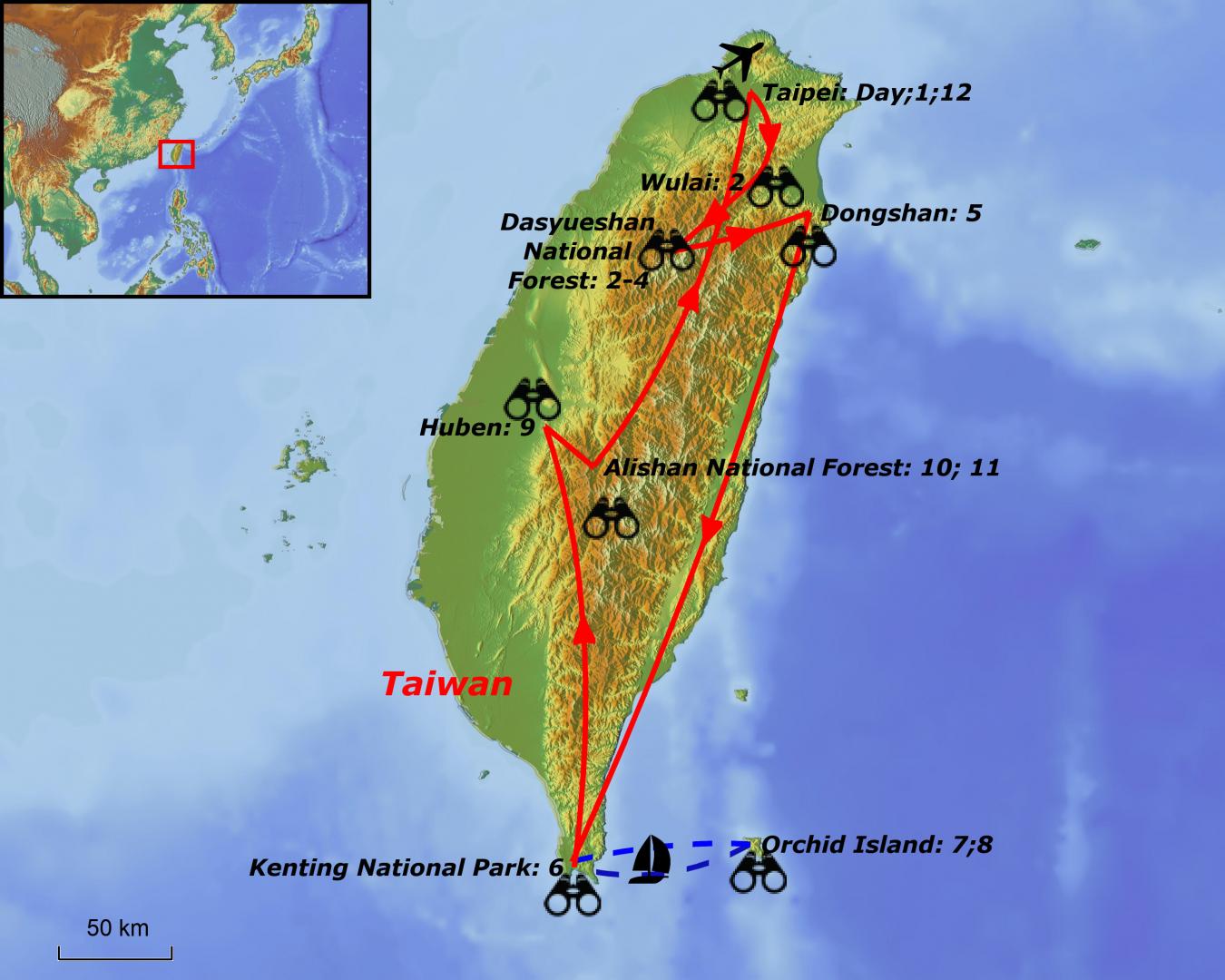 We just returned from our trip to Thailand. It was wonderful. Thank you very much for arranging our tour with Andy Walker. He was the best guide we ever had. He is knowledgeable,easy going, hard working, and has all the qualities that people expect from a guide. We really enjoyed birding with him. We would be happy to go birding with him any time and would highly recommend him as a guide to any of our friends.

Thanks again for giving us the opportunity to have him as our guide.