Our 1-day coastal Norfolk winter tour will take in the fabulous coastline of the county in its most dramatic form and connect with many of the special birds that make this part of the United Kingdom their home during this season. We will begin our tour at 9am and finish the day around dusk (times will vary slightly through the winter period). The North Norfolk coast is a popular and busy place, with birders and other tourists gravitating to several well-known sites. We will see a similar set of species to those possible at these well-known sites but will hopefully enjoy our birds with less people around. Western Marsh Harrier will be a near-constant feature of our tour.

Our tour meeting point is at Thornham Harbour, with the first part of the tour expected to take around three hours. From our meeting point we will first explore the immediate area where we will find wading birds such as Common Redshank, Eurasian Curlew, Common Snipe, Eurasian Oystercatcher, and Grey Plover. We may also come across the delicate Twite as well as European Rock Pipit which both spend the winter in this sheltered spot. We will then make our way along the sea wall as far as the coastal dunes. Along the route we will look for more waders as we scan the expansive saltmarsh. Here we will come across vast flocks of Pink-footed Geese and Brant (Dark-bellied Brent) Geese, flocks of Eurasian Wigeon and Eurasian Teal, and mixed finch flocks containing European Goldfinch, Common Linnet, and perhaps more Twite. The marshes are home to a wide array of birds of prey, and we may come across overwintering Hen Harrier, Peregrine Falcon, and Merlin along with resident species such as Western Marsh Harrier and Common Kestrel. Pink-footed Geese overwinter in Norfolk in staggering numbers, so we will stand a very good chance of seeing this species during our day trip on the North Norfolk coast.

Once we reach the dunes, we will cut through to the beach area and look for a different suite of birds. A scan of the sea should reveal species such as Common Scoter, Greater Scaup, Long-tailed Duck, Red-throated Loon (Red-throated Diver), and Great Crested Grebe. There is also the chance of rarer species here, such as Black-throated Loon (Black-throated Diver), Common Loon (Great Northern Diver), and Horned Grebe (Slavonian Grebe). The beach often has large flocks of gulls, and this gives us a good chance of finding scarcer wintering species such as Iceland Gull and Glaucous Gull in amongst the many European Herring Gulls. Finally, we will explore the beach in the hope of coming across the stunning Snow Bunting and Horned Lark (Shorelark) which overwinter here. We will then return along the sea wall back to the car park, stopping along the way to scan for birds, before finishing up our morning birding session. Snow Bunting winter on the Norfolk coast in sporadic flocks.

Before beginning the second part of our tour we will stop at the Royal Society for the Protection of Birds (RSPB) Titchwell Marsh Nature Reserve for lunch/a toilet break.

The second part of our tour begins at another harbour, this time Burnham Overy Staithe, which we will explore for the next three hours. Starting at the harbour we will once again scan for wading birds with new species such as Spotted Redshank, Ruddy Turnstone, Green Sandpiper, European Golden Plover, and Northern Lapwing all possible. After checking this area we will then begin our walk along the sea wall, taking in the stunning marshes which stretch out towards the famous Scolt Head Island. Along the way we will stop and scan at points that look favorable for birds. The route of our walk is lined with reedbeds, hedgerows, and suaeda banks, here we can come across species such as Redwing, Fieldfare, Common Reed Bunting, and Cetti’s Warbler plus large flocks of finches and starlings. We will stop and scan the saltmarsh, and this should give up some of the area’s newest arrivals in the form of Great (White) Egret and Western Cattle Egret, both of which have arrived in the area in recent years. These are joined by the resident Little Egrets and Grey Herons, and we may come across Eurasian Spoonbill (another recent colonizer) which can stay around the area during the winter – look out for our summer day trip option, when we will look for this species in their glorious breeding plumage.

Once we have left the harbour area and the marshland, the landscape changes into an expansive dune system. We will explore this area and search for European Stonechat, Redwing, Fieldfare, Goldcrest, Red-legged Partridge, Eurasian Blue Tit, Great Tit, Common Blackbird, Common Linnet, and European Goldfinch. Walking further through the dunes towards the pine woodland of Holkham we may come across a number of birds of prey including Western Marsh Harrier, Common Kestrel, Common Buzzard, Red Kite, Hen Harrier, Peregrine Falcon, and Merlin. We may also find a Rough-legged Buzzard which spends the winter in the area in most years. We may accidentally flush something exciting like a Eurasian Woodcock, Common Snipe, or Short-eared Owl as we make our way around the area. Finally, we will once again cut through the dunes to scan the sea and explore the beach in the hope of coming across species we may have missed earlier in the day. We will then head back to the car park, scanning for birds en-route, before taking a short drive to a nearby watchpoint. This will allow us to take in the spectacle of thousands of Pink-footed Geese returning to the marshes to roost near dusk. We may also catch up with birds of prey coming into roost which we may have missed earlier in the day, such as Hen Harrier, or nightbirds such as Short-eared Owl and Western Barn Owl. Western Barn Owl is the most common owl of the coastal marshes in winter.

Winter can be an interesting time for rare and scarce species in North Norfolk and a day of birding often throws up a surprise sighting or two. Throughout the day we will keep an eye out for species such as Great Grey Shrike, Lapland Longspur (Bunting), Greater White-fronted Goose, Tundra Bean Goose, Long-eared Owl, Bohemian Waxwing, and Black Redstart, any of which could be possible throughout the season.

There are also plenty of gorgeous common birds of the UK possible during the birding, follow the links to read about and see great photos of some of the common garden birds, farmland and woodland birds, and wetland and coastal birds of the UK. Some of these will feature during this day tour. 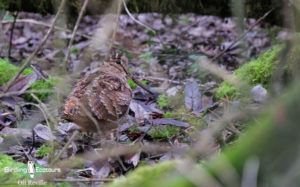 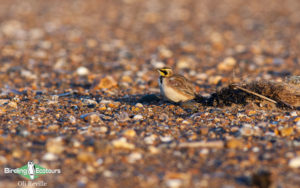