Our 1-day spring and summer tour in the Yare Valley will see us visit two of the premier reserves in the area and will offer an interesting range of highly sought-after birds and other interesting wildlife, including the potential for several scarce and secretive mammals. The Yare Valley is a vast expanse of wet grasslands, marshes and reedbeds around the River Yare, running from the outskirts of Norwich all the way to Breydon Water at Great Yarmouth. The Royal Society for the Protection of Birds (RSPB) plays a vital role in the maintenance and improvement of the area and it has become a huge success story in recent years, with several nationally rare species of fauna and flora thriving in the area. Our tour in the Yare Valley will begin at 8am and finish around 4pm. The beautiful Garganey is a scarce but regular visitor to the Yare Valley in spring. We will spend time looking for this stunning duck.

We will start off at RSPB Strumpshaw Fen where we will spend half the day exploring this beautiful reserve. This is a popular site, however due to its large size it means that we will be afforded quiet moments with just the wildlife for company.

The feeders around the visitor center will be our first area of focus. Here we will come across typical garden birds such as European Robin, Dunnock, Common Blackbird, Great Tit, and Common Chaffinch. However, these feeders can attract scarcer species such as Eurasian Bullfinch, Eurasian Nuthatch, and Great Spotted Woodpecker which often provide particularly good views. You can read about the “Common Birds of the United Kingdom” in a special blog series we put together, split into garden birds, farmland and woodland birds, and wetland and coastal birds. Lots of species featured in this blog series are possible on this day tour!

The trees around the visitor center are a good spot to look for migrant warblers such as Common Chiffchaff, Willow Warbler, and Eurasian Blackcap while the reedbeds here will be alive with the sound of Cetti’s Warbler, Sedge Warbler, Eurasian Reed Warbler, and Common Grasshopper Warbler. Many of these species will be present throughout the summer as they breed at the site and surrounding area. 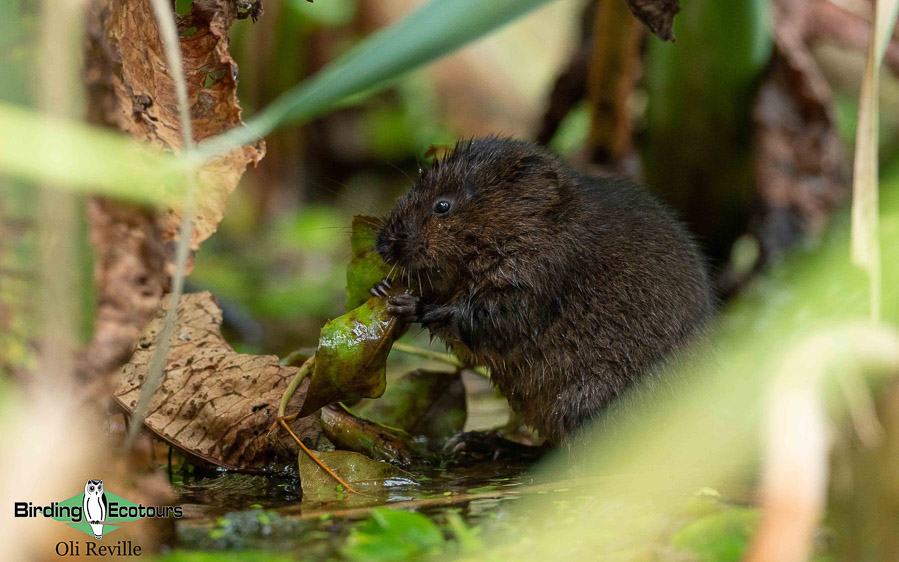 Strumpshaw Fen is a fantastic reserve for spotting the shy European Water Vole.

Looking out from the visitor center hide (blind) we stand a good chance of spotting Eurasian Otter moving across the water in front of us and it is also our first chance to try and spot the elusive and enigmatic Eurasian Bittern. Other species that can be seen here include Common Shelduck, Northern Shoveler, Common Pochard, Gadwall, Great Crested Grebe, Little Grebe, Western Marsh Harrier, and Common Kingfisher. Numerous hirundines, like Sand Martin, Barn Swallow, and Common House Martin are usually seen flying along the Yare River and may pause here to feed.

Moving through an area of woodland we will keep our eyes peeled for the passerine species mentioned above plus others such as Coal Tit, Marsh Tit, and Eurasian Treecreeper. We may get lucky here and hear our first Common Cuckoo of the day or see the elongated wings of a Eurasian Hobby glide over the trees. Other species that inhabit the woodland here include Mistle Thrush, Common Buzzard, Common Kestrel, Western Jackdaw, European Green Woodpecker, and Tawny Owl and we will be keeping our eyes peeled for any of these.

We will then exit the woodland and scan a large area of wet grassland. A scan here can reveal Western Barn Owl, Mute Swan, Grey Heron, Little Egret, Common Buzzard, Western Marsh Harrier, Common Kestrel, Eurasian Sparrowhawk, and even scarcer species such as Eurasian Hobby and Great (White) Egret. This is also a good spot for seeing the strange-looking (Chinese) Water Deer and a nearby pond  is a great place to try and see the elusive European Water Vole. This small semi-aquatic mammal has decreased drastically in the United Kingdom (UK) but in other parts of Europe it is considered a pest species! Whinchat is a regular migrant that passes through Norfolk in May. They can be flighty but on occasion will pose very nicely, they like perching up on fences so it is worth checking any you see.

We will continue making our way through the reserve and stop at a number of the hides that are dotted around the site. Careful scanning of the waterways next to the path may give us another glimpse of the shy European Water Vole. We will pause and spend some time looking over the Yare River and across to the Wheatfen Broad reedbeds. This area should be full of the deafening singing of excited, territory-marking warblers and these should include Cetti’s Warbler, Common Whitethroat, Lesser Whitethroat, Willow Warbler, Common Chiffchaff, Garden Warbler, Eurasian Blackcap, Eurasian Reed Warbler, Sedge Warbler, and Common Grasshopper Warbler. In some springs this spot is also home to the elusive and rare Savi’s Warbler which is an exceedingly rare breeding species in the Norfolk Broads and Yare Valley (and a UK rarity too). The reedbeds here also support the beautiful Bearded Reedling (Bearded Tit) and their “ping” call should give away their location for us. This is a great reserve to explore all through the spring and summer months.

This spot is also particularly good for birds of prey and gives us a further chance of observing Western Marsh Harrier, Eurasian Hobby, and Common Kestrel. Eurasian Bittern can also be seen from here or from an excellent tower hide further along the river. The tower hide serves as a great spot to scan over the reserve and we will spend some time here scanning the reedbeds. This is also a good spot for waders and regular species seen include Pied Avocet, Common Sandpiper, Common Snipe, Black-tailed Godwit, Ruff, Common Redshank, Northern Lapwing, and Eurasian Oystercatcher.

We will continue our route around the reserve, stopping at points of interest, before making our way back to our starting point. Along the way we will check a garden near the reserve which (during May-July) holds a number of gorgeous Swallowtail butterflies, a real UK rarity that is regular in this part of Norfolk.

After a stop for a toilet break, we will drive a short way to our second site of the day where we will spend the afternoon. We will spend a good deal of time scanning groups of shorebirds (waders) at both sites in the hope of finding scarcer species like this Little Stint.

Our afternoon will be spent in the open expanses of RSPB Buckenham Marshes. This huge area of marshland, reedbed, wetland, and grazing meadow is a haven for wildlife, especially birds and has a proven record of being a fantastic migrant trap. We will begin by crossing the railway line into the marshes.

While not as busy with ducks and geese as the winter months there are still some interesting wildfowl species to see here at this time of year. The pools can hold a real mixture of species, such as Common Shelduck, Northern Shoveler, Gadwall, Common Pochard, Tufted Duck, and Northern Pintail, all looking great in their smart breeding plumage. The real star find here though is Garganey, a stunning species, and it is well worth taking time to try and find one of these here after they have returned from their overwintering grounds in sub-Saharan Africa. The River Yare provides birds with a useful route to and from the North Sea. Throughout the spring Common Tern can be seen here doing just that.

As we make our way through the marshes, we will keep our eyes peeled for birds of prey such as Western Marsh Harrier, Common Buzzard, Red Kite, Eurasian Hobby, and Common Kestrel. The wet meadows and pools should feature gorgeous Western Yellow Wagtails and have good numbers of hirundines and swifts foraging overhead, with Sand Martin, Barn Swallow, Common House Martin, and Common Swift all possible here throughout the season. As the day progresses, we may also locate Western Barn Owl out hunting.

As at Strumpshaw Fen, earlier in the day, the reedbeds and bushes here should be alive with the sound of vocal passerines. While at the reserve we should come across Eurasian Skylark, Sedge Warbler, Cetti’s Warbler, Common Whitethroat, Eurasian Reed Warbler, Eurasian Blackcap, Meadow Pipit, European Goldfinch, Common Chiffchaff, Willow Warbler, and Common Reed Bunting. We should also see, or at least hear, several Common Cuckoos during our time here. In addition to these more common species we stand a chance of finding other scarce species here such as Common Grasshopper Warbler, Whinchat, Northern Wheatear, Ring Ouzel, and Western Yellow Wagtail. We will keep our eyes and ears peeled for the chance of Common Kingfisher.

The river at Buckenham marshes is a good spot for watching birds moving through, and more common species like Common Kingfisher, Little Egret, Common Tern, Black-headed Gull, and Mew (Common) Gull have been joined by Great (White) Egret, Mediterranean Gull, and Caspian Tern in past springs.

We will finish the day by slowly meandering back to the car and taking in the sounds of the marshes as the evening sets in before departing from the site.

The exact species seen will vary from day to day during the migration period, the above is a sample of what we might see during our day tour. Tours in the summer period (such as in June and July) will have more of a focus on the birds that have remained in the area to breed or over-summer and still promise to offer an enjoyable day out in Norfolk birding. 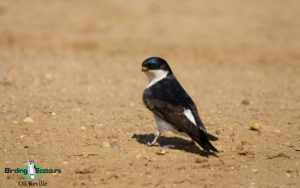 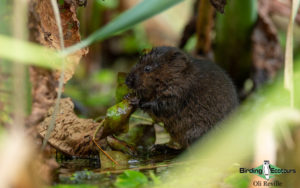