New Guinea immediately invokes the stuff of dreams amongst us birders, doesn’t it? It certainly does for legendary BBC wildlife broadcaster Sir David Attenborough – his documentary on the birds-of-paradise is one of those transfixing moments of nature TV, he says “For me, birds-of-paradise are the most romantic and glamorous birds in the world”. We must agree with Sir David – here at Birding Ecotours we love this family and love showing you this family…

There is something incredibly special and alluring about that far-flung island, sitting north of Australia and to the east of Southeast Asia in the Pacific Ocean. While half of the island might currently be considered politically part of Indonesia, the staggering avifauna of this island is purely ancient Australasian, of Gondwanan heritage. We are going to take a look at the eastern half of the island here, the fascinating Papua New Guinea (PNG)… 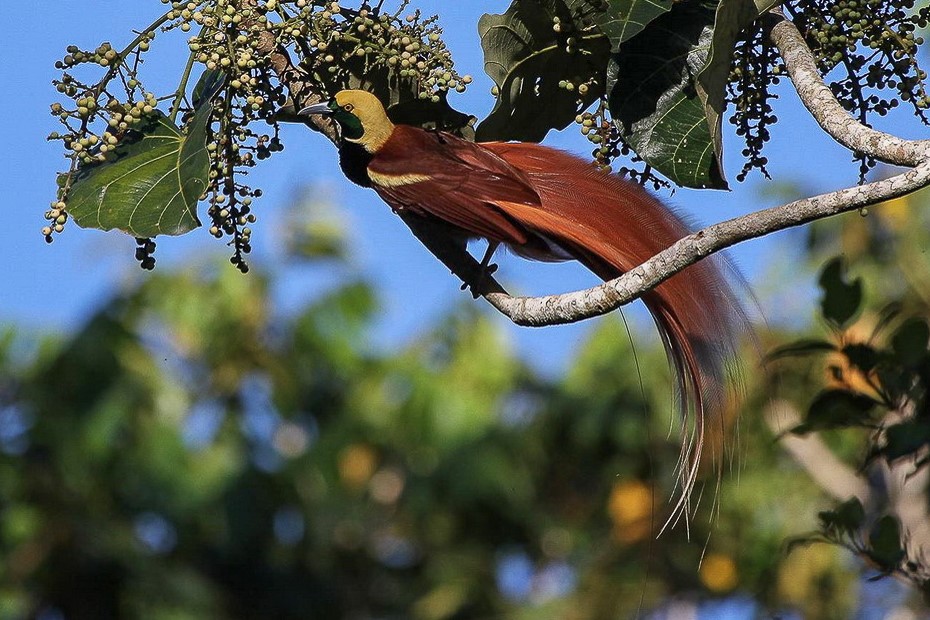 Raggiana Bird-of-paradise – the national bird of Papua New Guinea. We will enjoy their impressive display efforts during our tour (photo Matt Prophet).

For many people, New Guinea is of interest for its famed cultural history, stunning lowland and montane forests, beautiful orchids, and precious metals. For birders, the lure of some of the best-looking, unique, and most highly sought-after birds on the planet is the main draw, including many species of the ‘must see’ family in world ornithology, the unparalleled birds-of-paradise, complete with their dramatic displays, unfathomable otherworldly noises (from a mix of voice (some have two voice boxes!) and wing), and elaborate plumages. The names of some of these species conjures up grandiose images of a bygone age in our mind’s eye, with such avian mouthfuls as King of Saxony Bird-of-paradise, Princess Stephanie’s Astrapia, and Queen Carola’s Parotia, to name a few of those found in PNG. When Europeans first saw the plumes of these birds in the 16th century, they believed they must be from heaven and called them the “Birds of Paradise”. The men of New Guinea make even greater claims, they say the birds possess supernatural powers and magic and are therefore highly important, sacred in fact, to them.

We invite you to come and join us on this incredibly exciting tour of Papua New Guinea, during which time we will have ample opportunities to build up a huge list of birds-of-paradise – over 20 varied species, in fact! We will marvel at their flamboyant feathers, fancy footwork, and bizarre contortion. The tail of the Ribbon-tailed Astrapia (almost 40 inches /1 meter long) needs to be seen to be believed, it bounces around like a butterfly as the male flits between display-tree perches. The Magnificent Bird-of-paradise leaps around his display arena (after he has cleaned it) like a supercharged wind-up toy. Black Sicklebill and Brown Sicklebill transform their huge bodies into an assortment of shapes to make an Olympic gymnast jealous (their “cobra pose” is particularly impressive) as their calls radiate out for over half a mile (about a kilometer). The national bird of PNG – Raggiana Bird-of-paradise, along with Lesser Bird-of-paradise and Greater Bird-of-paradise scream their raucous far-carrying calls from the canopy in big leks. Blue Bird-of-paradise takes it up a notch by hanging upside down like a bat while it makes a range of interesting sounds and puffs its body and wings out, a really bizarre and stunning bird, even by PNG and BoP standards! There are so many more interesting-sounding birds-of-paradise we will look for too, such as paradigallas, lophorinas (formerly Superb Bird-of-paradise), riflebirds, and manucodes. 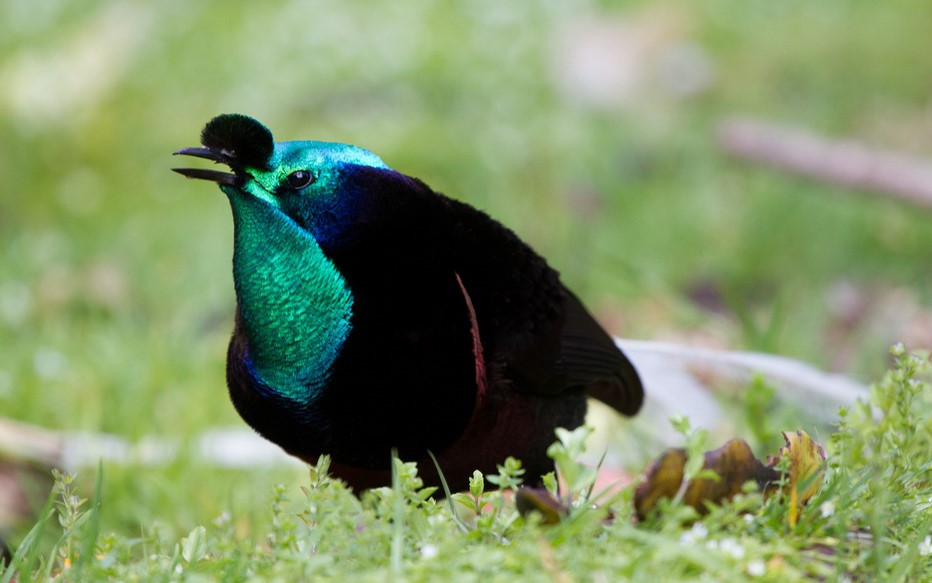 The sublime Ribbon-tailed Astrapia – one of many gorgeous birds-of-paradise that we will enjoy on this very special tour, which one will be your favorite? (photo Matt Prophet) 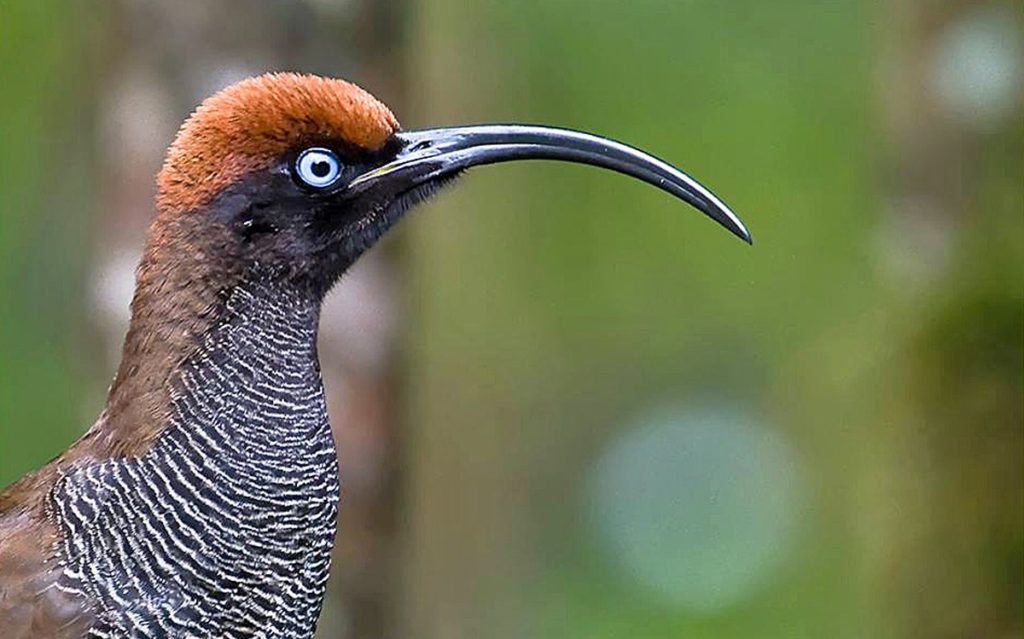 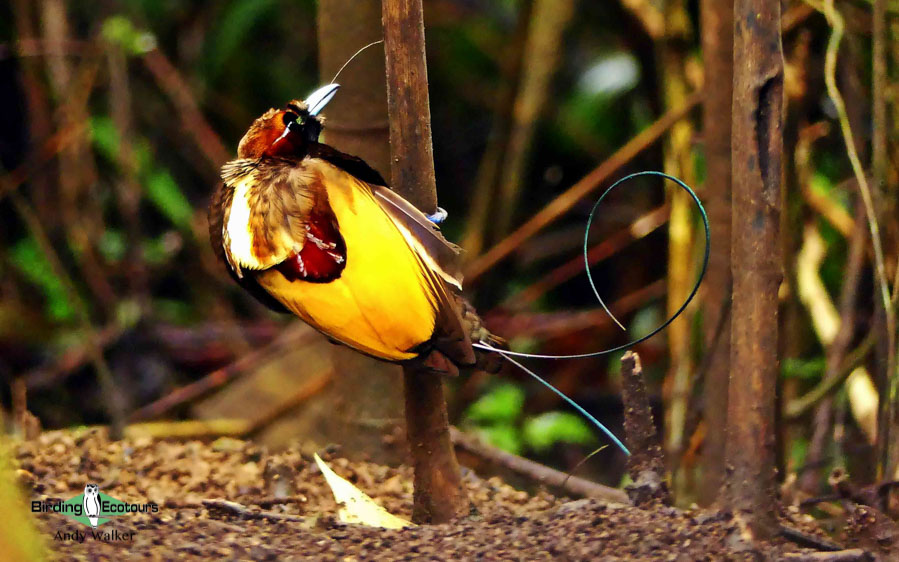 We will marvel at the sight of the male Magnificent Bird-of-paradise bouncing around his display area. He meticulously cleans the area prior to commencing his display, in an effort to attract a mate. 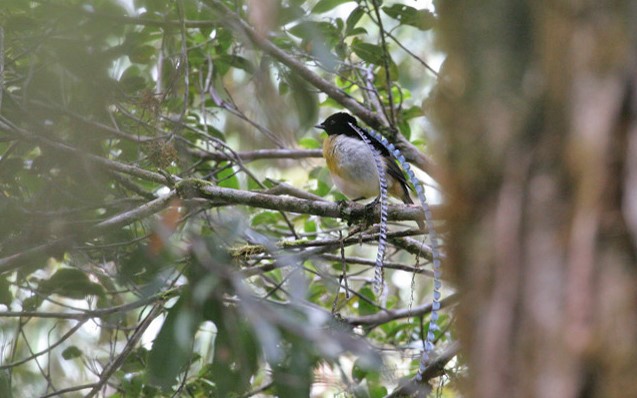 Not only the holder of one of the coolest bird names on the planet, the King of Saxony Bird-of-paradise also has one of the most incredible displays. (photo Matt Prophet) 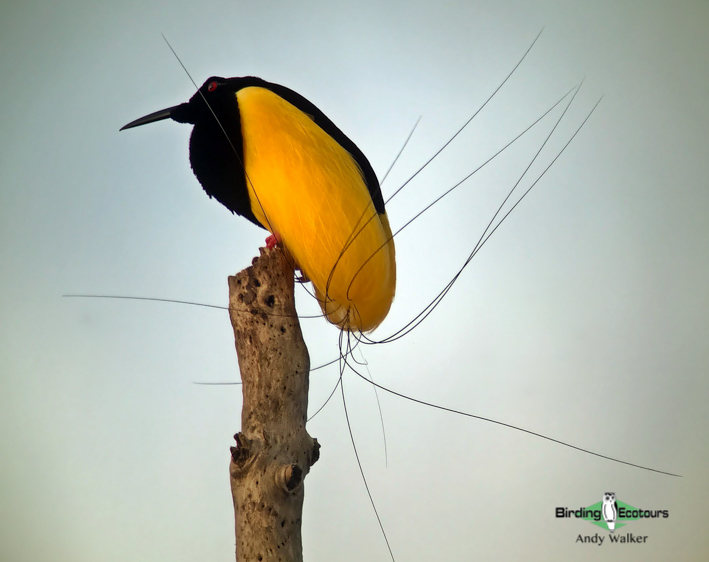 A phone-scoped view of a spectacular male Twelve-wired Bird-of-paradise on his display perch. This bird sure lights up an overcast morning in New Guinea.

The birds-of-paradise are probably reason enough to visit PNG for many, however it would be doing a massive disservice to neglect the many other ludicrously plumaged, drop-dead-gorgeous, and unique birds here, with such gems as paradise kingfishers, ‘normal’ kingfishers, jewel-babblers, fruit doves, parrots, pittas, and bowerbirds all possible too. This is one of those world birding destinations where you need to prepare for sensory overload – in a good way, sunglasses can come in handy too! 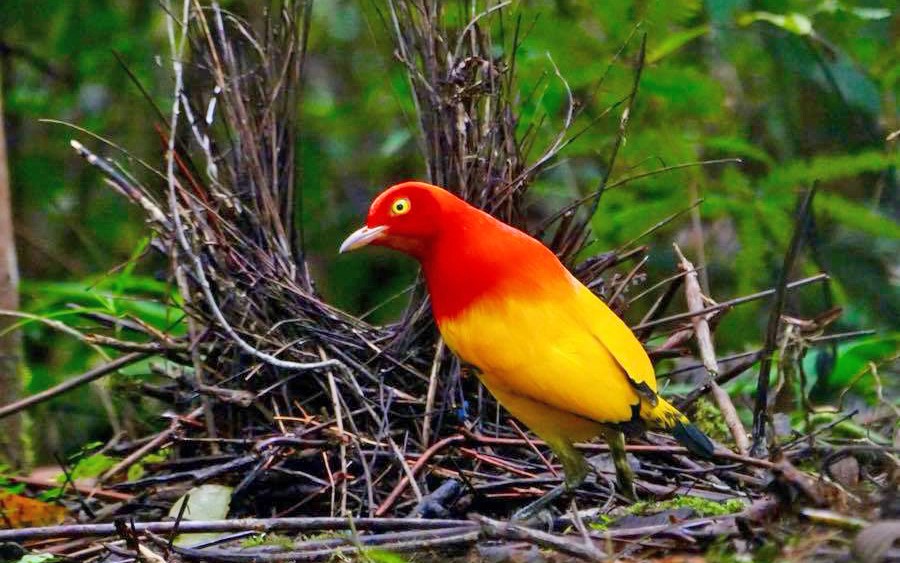 Flame Bowerbird is one of those birds that simply stops you in your tracks. Shocking color which is certainly hard to beat! (photo Wako Napasu) 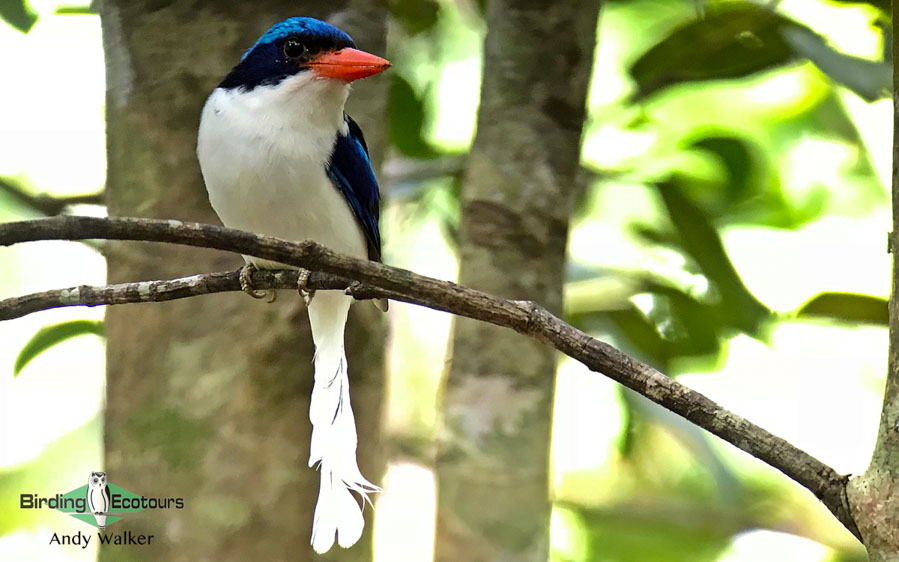 Common Paradise Kingfisher is a delightful bird, one of several paradise kingfishers possible on the tour, all are beautiful. 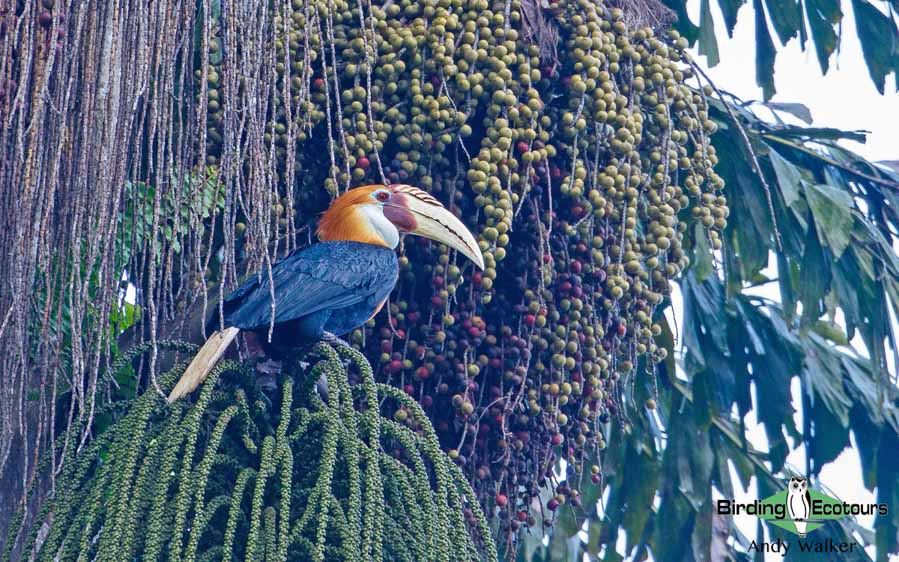 Blyth’s Hornbill is a huge bird and we are likely to hear them coming before we see them, then once we see them, we are sure to be impressed, for they are beautiful birds. 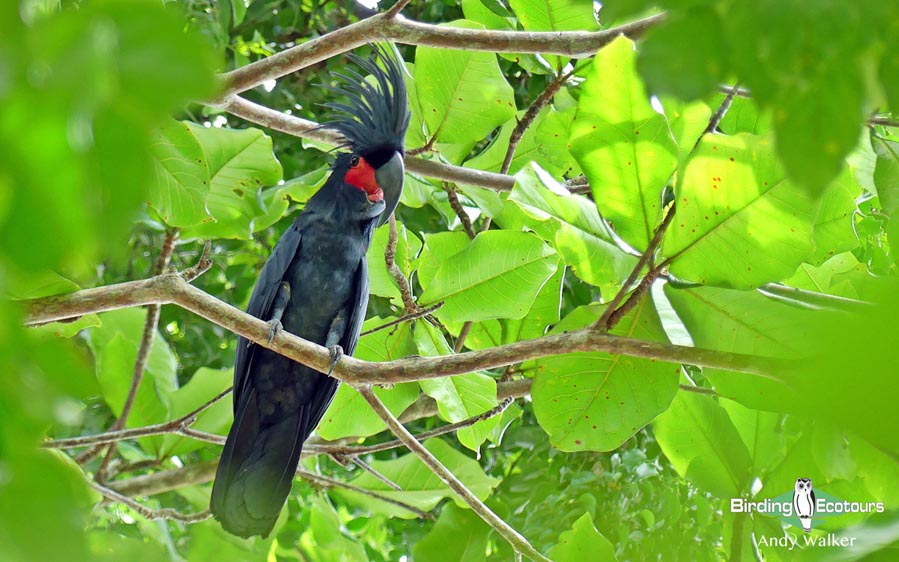 Palm Cockatoo is an immense bird – huge and striking at the same time.

If you are a ‘family lister’ pay attention here: three monotypic New Guinea endemic families are possible on our PNG tours – Wattled Ploughbill, Blue-capped Ifrit, and Mottled Berryhunter. Furthermore, Rufous-naped Bellbird (formerly called Rufous-naped Whistler but moved from that family to a new family made up of three species called Australo-Papuan bellbirds) is also possible, as are other New Guinea endemic families such as satinbirds and melampittas (both were formerly considered BoPs before moving to ‘uncertain’ for a number of years). We have an excellent chance of all of these families on our PNG tour. 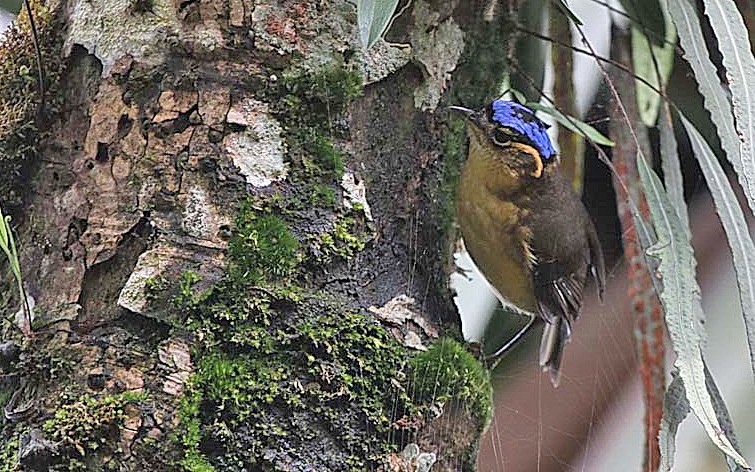 Blue-capped Ifrit is an interesting bird, it is actually one of several New Guinea birds that are poisonous! It is distantly related to the monarchs, shrikes, crows, birds-of-paradise, and Australian mudnesters. It has however recently been elevated to monotypic family status and is one of three monotypic families that we will look for on our tour. (photo Matt Prophet)

Our PNG tour runs in August-September when the energetic birds-of-paradise should be at their display leks, dance arenas, or song perches, providing excellent views of them going about their frantic and mesmerizing (to us and the female birds) business of trying to attract a mate!

This tour is a fantastic opportunity to realize your bird-of-paradise dream as we leave all sense of the modern world behind and delve into the ethereal atmosphere of some of the oldest forests on earth, with their prized avian possessions in attendance. We look forward to taking you there and think this trip will rank as one of those once-in-a-lifetime, unforgettable moments that you will cherish forever. The full detailed Papua New Guinea birding tour itinerary is provided here, please enquire if you have specific questions, we would love to hear from you and help make your dreams come true. 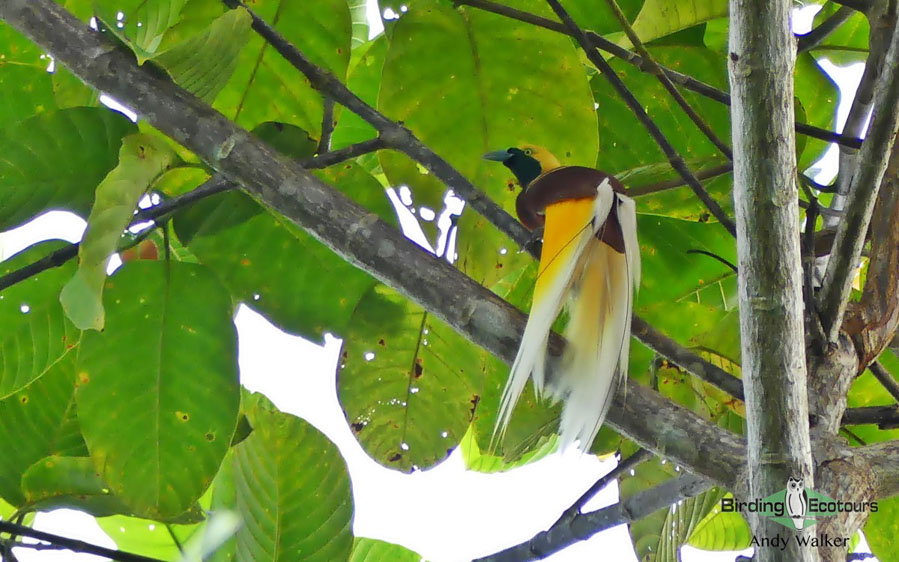 Lesser Bird-of-paradise is always such a clean and crisp-looking bird. One of over 20 species of birds-of-paradise we could find on this PNG tour.

CLICK HERE TO TAKE A LOOK AT THE TOUR ITINERARY