In April 2017, after his very successful Neotropical Bird Club Costa Rica fundraising tour, Andy Walker had a busman’s holiday and went birding in Colombia for three weeks. During this trip Andy checked out some of the locations in the Western Andes, Central Andes, and Santa Marta Mountains that we take clients to while on our Colombia tours. Below, Andy has provided a summary of his trip with photos of his ‘Top 5’ birds. He has a lot more information and photos on his personal blog of these and a great many other species here.

This was my first trip to Colombia, a destination I have long dreamed of visiting. A long time ago, when I used to live and work in Costa Rica, on rainy days I’d sit and pour through Steven Hilty’s Colombia Field Guide, imagining the day I’d see my first ever Andean Cock-of-the-rock, Andean Condor, and a myriad of hummingbirds, antbirds, and tanagers. Back then it simply was not safe to travel to the country. However, thankfully Colombia is now a much safer destination to visit and is rapidly becoming the ‘must visit’ country in South America. Colombia now also sits on the top of the pile of countries with the most bird species, complete with a good number of endemics. Throw in some good food and very friendly people with all the amazing birds, and I had a fantastic trip.

Five of the Best

Here are some photos and notes on my ‘Top 5’ from the trip. 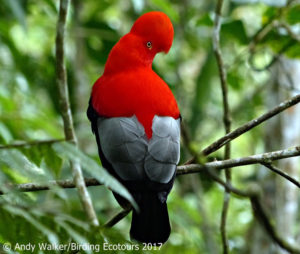 I visited a lek site of this stunning bird, one of the most-spectacular birds in the world. After a short walk down into a river valley not too far from Cali, and after getting into place among some bushes so as not to be too visible, we sat and waited in a late-afternoon rain shower. I could hear the birds calling, and it was just a matter of time before they’d appear. The excitement was rising, and then suddenly they were there, right in front of me. What a bird! I spent over an hour just watching and listening to them as several males vied for the attention of a single female. This was going to be hard to beat – and it was only Day 1 of my trip! I needn’t have worried, though, as there were so many more highlights to come my way over the next few weeks in this magical country. 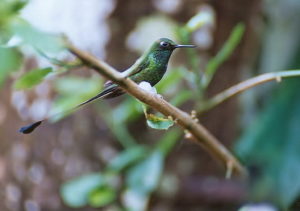 One of the hummingbirds I was most hoping to see was the White-booted Racket-tail. This tiny hummingbird (well, in terms of body length) was quite shy and fast, so trying to get a photo was a challenge, particularly away from its favorite nectar feeder. As impressive as this species is, and after a brief spell as my favorite hummingbird seen of all time, it was actually replaced later during the trip as number one. Take a look at my blog and find out what replaced it…. 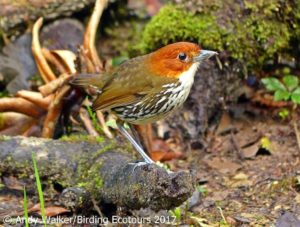 I was a little skeptical when my local guide said we were going to go into the forest and feed some antpittas, and that they would hop in and give us great views down to a matter of feet. These things just don’t happen, I thought… Happily I was wrong, and in a very short time we were actually sitting with three species of antpittas eating out of our hands, literally! Chestnut-crowned Antpitta (above), Brown-breasted Antpitta (an endemic), and Slaty-crowned Antpitta were all seen incredibly well. To see an antpitta is one thing (often quite difficult), but to see it/them as well as we did these birds was a real trip highlight of one of the best birding days of the trip and actually still rates as my best birding days of the year (all these months later, and I’ve had a lot of good birding days since!) 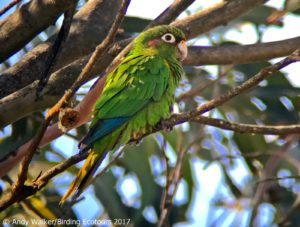 I really loved the Santa Marta area – it was very different from all the other areas I stayed at and resulted in many new birds. I birded in the dry lowlands and then moved up into the mountains and stayed at the wonderful El Dorado Lodge – this is one of the best birding lodges I’ve stayed at anywhere in the world. Amazing rooms, food, birding, and very friendly staff, no wonder our clients rave so much about the place! It was here that I found most of the Santa Marta endemics, including the gorgeous Santa Marta Parakeet, a fairly rare bird, too. I got the above photo on my iPhone 7 through my Swarovski ATX-95 scope as it flew into view while I enjoyed my picnic breakfast and hot chocolate near the top of the mountain. 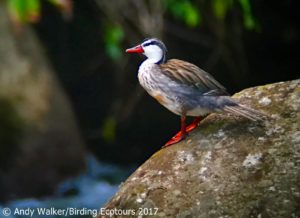 This is a phone-scoped record-shot in near-darkness of one of my most-wanted ducks anywhere in the world. I’d seen a pair along a river earlier in the trip and got some video footage of them as they bobbed along in the water(take a look at the video on the Birding Ecotours Facebook page here). These ducks are found on fast-flowing mountain rivers, and the male birds (pictured) in particular are really eye-catching. These ducks inhabit the rivers of the Andes range all the way from Colombia down to Argentina, where Birding Ecotours owner Chris Lotz recently saw them. Watch out for Chris’ Argentina trip report coming soon…

This was my first trip to Colombia, a destination I have long dreamed of visiting, and I didn’t leave disappointed. I recorded almost 500 species (most of these seen well) from what I would consider a fairly relaxed-pace trip, which was very pleasing. This short trip (for a country as diverse as Colombia) has really whetted my appetite for visiting Colombia again, and I am already planning my next trip. There’s still so much more to see!