Early this year I had the privilege to visit Guyana for the first time, and I fell in love with this spectacular country. Flying above the Guyanese jungle watching unbroken miles of rainforest, long rivers, dramatic waterfalls, and spectacular tepui foothills of the Pakaraima Mountains reminded me of the early-20th-century novel The Lost World by Arthur Conan Doyle, and I could not find any better description of what I experienced during the following days exploring Guyana. I was birding in the Lost World. For a birdwatcher, wildlife, and nature lover like me this remote and unknown country holds many treasures on offer, in particular an amazing set of range- restricted species that are hard to find in other South American countries. If you are lucky you may experience spectacular encounters with wildlife and be rewarded with breathtaking views of magic panoramas and scenery. I will always remember this trip as an incredible adventure that allowed me in very few days to enjoy the highlights of the country, witness one of the last pristine rainforests that remain in the world, and get a very nice list of birds. I managed to clean up several Neotropical families on my personal bird list. Below you will find some facts that might explain to you why Guyana is a great destination that should get more attention and why I choose it as our recommended Neotropical destination for 2022. 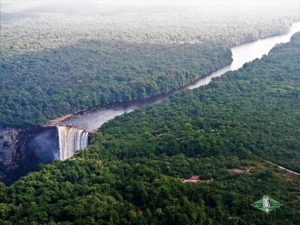 Dramatic view of the Kaieteur Falls

Guyana is bordered by the Atlantic Ocean to the north, Brazil to the south, southwest, Venezuela to the west, and Suriname to the east. With 215,000 square kilometers (83,000 square miles), almost the size the Great Britain, it is the third-smallest sovereign country on mainland South America after Uruguay and Suriname.

Guyana is the only English-speaking and drive-left country in South America.

In 2019 the country received only 290,000 foreigner visitors, which makes it ideal for those travelers who enjoy more remote and uncrowded destinations.

Guyana is home to waterfalls, including the impressive Kaieteur Falls, the world’s largest single-drop waterfall by volume of water flowing over it.

What makes Guyana so special is that 75% of its territory is covered by tropical forest, this being the second-largest percent coverage of rainforest on earth, with more than 80% of this forest still untouched.

Guyana holds one of the most intact savannas of South America, where Giant Anteater is not uncommon.

Guyana offers more Harpy Eagle sightings than any other country in the Neotropics, and the indigenous people working on ecotourism often inform us about the existence of active nests in the rainforest near the villages open to tourism, so with a bit of luck, or with the certainty of having an active nest, Guyana provides visitors with one of the most-wanted bird species in the world. 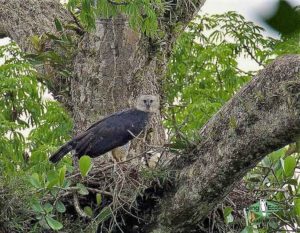 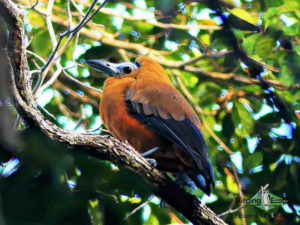 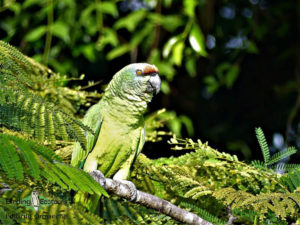 On a trip to Guyana you may be lucky to see some of South America’s elusive wildlife including Giant Otter, Lowland Tapir, Jaguar, Green Anaconda, and even Puma. 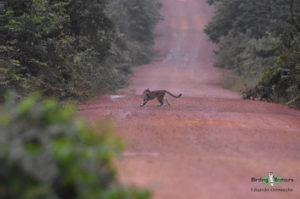 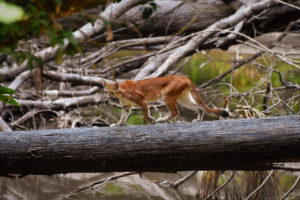 Guyana is also a country where you can see five of the six species of Nyctibiidae (potoos) of South America, with Rufous Potoo and White-winged Potoo being quite reliable on our tours, generally the last and hardest for the average South American bird lister. Our guides have stakeouts for most of the species, including Great Potoo and Long-tailed Potoo as well as Common Potoo, the hardest to see in Guyana. 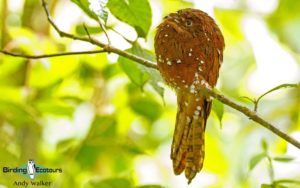 A birding adventure in Guyana is not complete without a special 4×4 expedition to look for Sun Parakeet and Red Siskin. Sun Parakeet is a very range-restricted species found in a small area including Northern Brazil, southern Guyana, extreme southern Suriname, and southern French Guiana. Sadly the numbers of this lovely parrot are declining rapidly due to loss of habitat, hunting for plumage, and excessively being caught for the pet trade. IUCN categorizes the species as Endangered. Red Siskin is one of the rarest birds in South America. Although it was common in the early 20th century, today it is known mainly from only four Venezuelan states. It has disappeared from Trinidad and Tobago. A single record from Northern Colombia in 2000 was the first since 1986. In 2003 a new population was discovered in Guyana at 950 kilometers (590 miles) from its nearest known locality in Venezuela. Traveling through the southern part of Guyana around the town of Lethem near the Manari and Wichabai Ranches you can still find healthy populations of these two mega species. 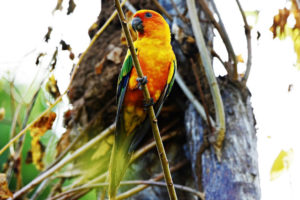 When is the best time of the year to visit Guyana?

We suggest any time between the end of January and March after the rainy season. However, October is also a good month to explore this great destination.

How to get to Guyana

Birding Ecotours offers an amazing and comprehensive birding adventure in Guyana, our Guyana: The Lost World – Guianan Shield Specialists and Sun Parakeet tour, which will show you the best the country has to offer. Our 14-day tour will be a birding tour, prioritizing avian target species, but we’ll also be enjoying all the wildlife and Guyanese culture encountered during this trip.

We will visit a diverse range of natural habitats and birding hotspots, including the shores of the Atlantic Ocean, the famous Georgetown Botanical Gardens, the tropical rainforest at Iwokrama River Lodge, the incredible views from the canopy walkway at Atta Rainforest Lodge, the Rupununi Savannah, a magic flight above the impressive Kaieteur Falls, and lovely boat trips along the Essequibo and Demerara Rivers.

We invite you to join me to explore this remote and incredible destination. Please contact us for details.