The Southern Ground Hornbill (Bucorvus leadbeateri) is a large bird, most frequently encountered on the ground, and conspicuously colored in striking red and black. It rather resembles a modern-day Pterodactyl, and, if seen up-close, has gorgeously long, black eyelashes that would make any Maybelline model jealous. This hornbill also has a handsome, robust bill, giving it the special ability to break open tortoises as well as to feast on a variety of prey, including insects, lizards, small mammals, birds, and even venomous snakes. 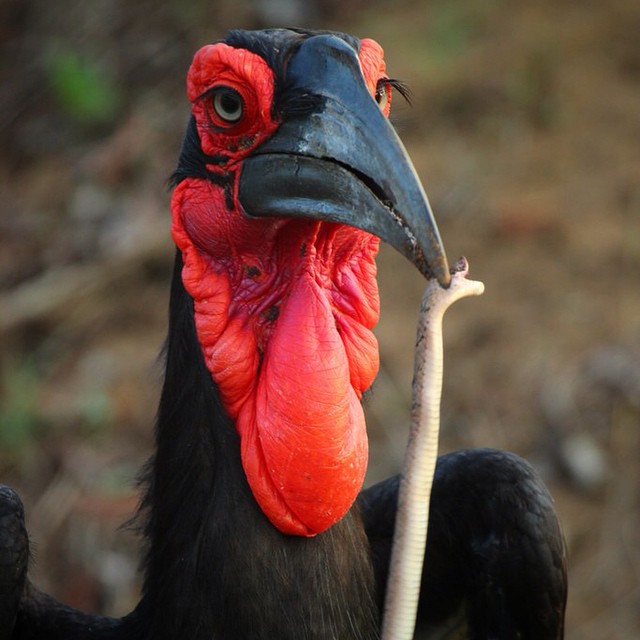 Southern Ground Hornbills have a fascinating, closely-knit family life. They are known as cooperative breeders, with one flock ranging from about four to even ten birds. A flock is made up of a dominant male and female (which mate for life) and previous offspring or unrelated birds that help to rear the breeding pair’s chicks, which are fed by all members of the group. Females usually leave their native group when they reach maturity, at about six years of age, to seek out a group of males.

Southern Ground Hornbills are extremely territorial, patrolling and defending an area of about 100 square kilometers, which they broadcast with a booming “hoo hoo-hoo” duet that can carry up to four kilometers. Any trespassing neighbors are chased off in flight.

Southern Ground Hornbills nest in large tree cavities, at least 40cm wide and located four to seven metres above ground level. If undisturbed, they will use the same nesting sight year after year. Sadly, these ideal abodes are not always easy to come by, and are becoming less and less obtainable due to habitat destruction from logging, local wood collecting, and land clearing for agriculture, as well as fires and elephant damage. This is especially a problem outside of protected areas, and this is one of the reasons why Southern Ground Hornbills are listed as Vulnerable.
When the female is ready, she enters the nest cavity to breed. Throughout her incubation, the male and the ‘helpers’ collect and bring her nesting material and food. In fact, as part of his courtship display, a male will gift-wrap a food item with a bundle of nest lining and present this to the female, a ritual which continues until the first egg hatches. Usually only two eggs are laid. The second chick hatches a few days after the first and is usually overpowered by the first chick which serves as an insurance policy in case the first chick should not survive. Fledglings are completely dependent on the adults for two years. 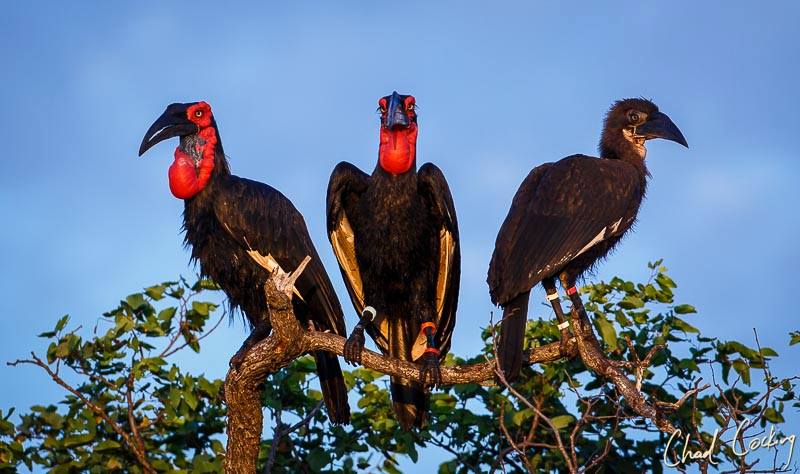 So where’s the best bird-watching destination for a sight of the Southern Ground Hornbill?