The Italian renaissance artist and inventor Leonardo da Vinci is well known for his flying machines. Not only did he wish to fly, but he also wanted to walk on water and drew detailed sketches designing boat-like shoes for this purpose. I wonder, had Leonardo the chance to travel to Africa and see an African Finfoot – a bird that not only flies but walks on water too – what he would have felt? A mixture of awe and envy, I’m sure! 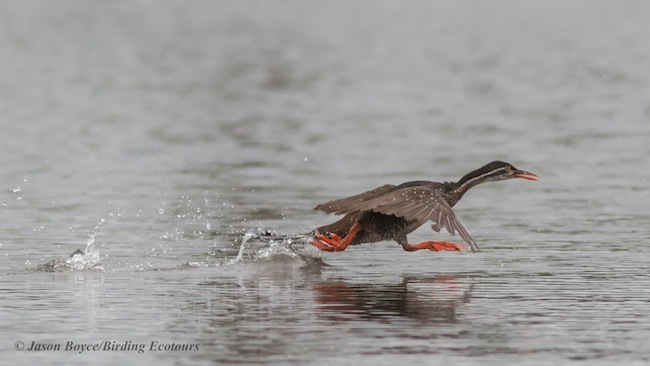 The African Finfoot, (named ‘watertrapper’ or ‘water walker’ in Afrikaans) is of the genus ‘Podica’ meaning ‘strange, lobed toes’. Although it may appear duck-like at first, they’re not at all related to ducks. Finfoots are a member of the order Gruiformes, which means ‘crane-like’ (an ancient group of birds with a rich fossil history) and are more closely linked to coots, gallinules, bustards and cranes.

Seeing one of these mysterious and unique birds is a truly unforgettable experience! To watch an African Finfoot ‘walk’ (well, more like run!) on water is an outstanding privilege. Sometimes this shy, reclusive bird only affords the birdwatcher a short glimpse of itself. Even so, he/she will not be able to miss the bird’s bright red-orange feet! Instead of webbed feet, the African Finfoot propels itself through the water with large conspicuous lobed toes. These strong feet also allow them to clamber about branches, fallen trees, and vegetation overhanging water. It’s among this vegetation that they construct nests – rather untidy flat bowls of sticks and reeds, usually on a branch about one to four meters above the water, and almost always in quiet waters. It is possible to tell apart a male and female by the difference in their coloring; the male is usually greyer than the female and has a plainer face. The female appears browner with a boldly patterned brown and white face. However, morphing is fairly common, which then makes telling them apart a little trickier!

The African Finfoot is one of three different finfoot species in the world, it also happens to be the largest (46–53 cm long) and the only one found in Africa (from Senegal to the Congo basin and from Ethiopia to South Africa). The Masked Finfoot is found from Eastern India to South East Asia, and the Sungrebe can be seen in Central and South America. Although the African Finfoot has a rather large range, the IUCN Red List states that the population of this special bird is decreasing. However, its decline is not believed to be sufficiently rapid for it to be categorized as vulnerable – yet. According to Birdlife South Africa, its population has decreased by 30% in the last ten years. This is due to habitat degradation, especially man’s pollution of beautiful rivers. Harmful pesticides flushed into these natural waterways decreases the population of the African Finfoot’s prey species – larval insects, spiders, millipedes, crabs, shrimps and small snails, frogs and fish. 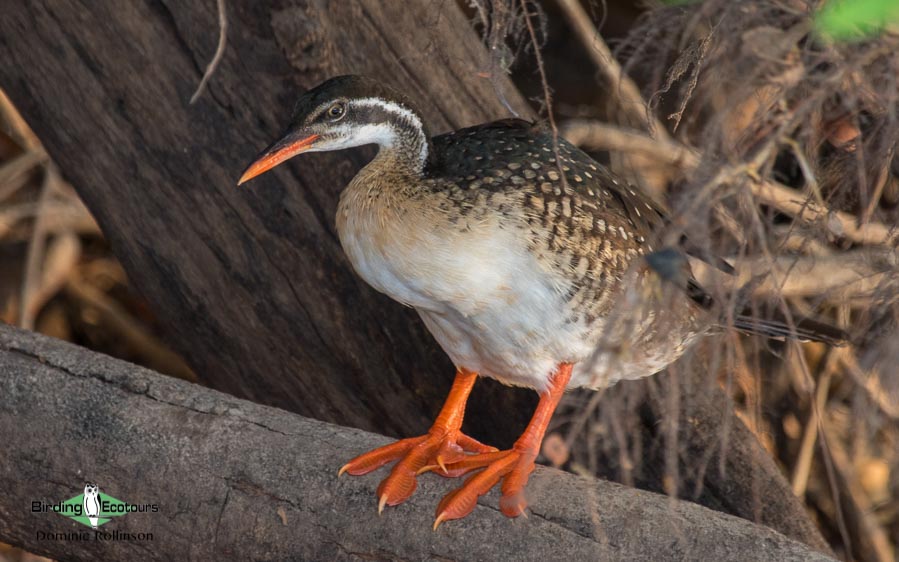 So where’s the best place to see an African Finfoot? 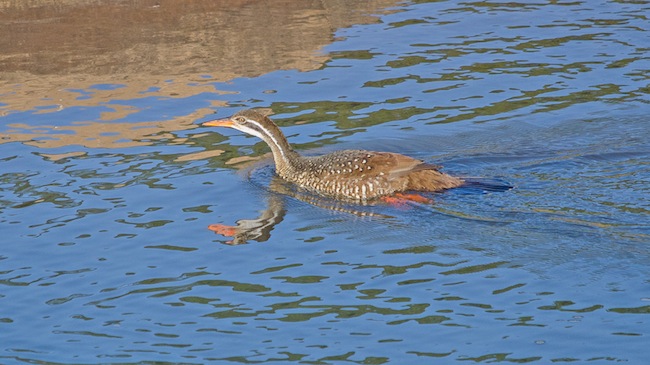