If there is one bird in the world that can lure even non-birders out to look for it, it’s the Snowy Owl (Bubo scandiacus). This regal, enigmatic bird has enraptured even the earliest of civilizations, one of the best examples being their ancient depictions in cave paintings in Europe. From North America to Scandinavia to Russia, local inhabitants have incorporated these Arctic wanderers into their mythology and folklore, giving them many names, including “Ghost Owl”, “Tundra Ghost”, “Ookpik”, and “White Terror of the North”. In Romania it is said that the souls of repentant sinners fly to heaven as Snowy Owls. Why has the Snowy Owl captured people’s imagination so? Is it their ghost-white feathers and piercing yellow eyes? Their notorious hunting skills? Or perhaps their mysterious migration pattern? 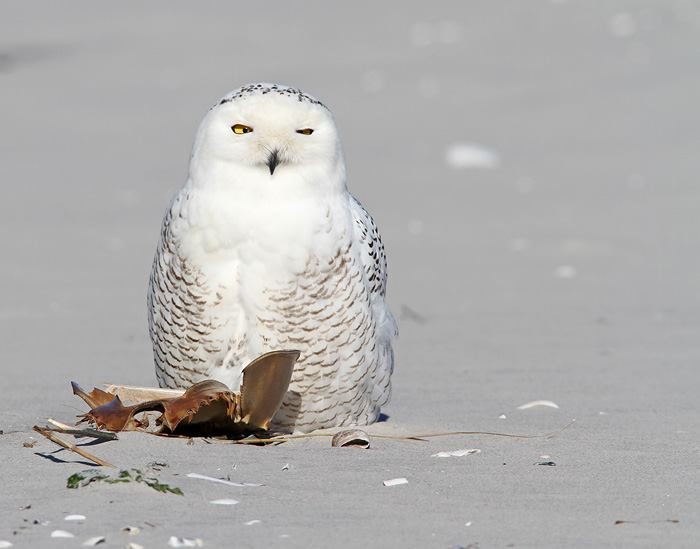 Snowy Owls nest in the Arctic tundra of the northernmost stretches of Alaska, Canada, and Eurasia. The word ‘tundra’ comes from the Finnish word, ‘tunturi’ meaning ‘treeless plain’. It’s a stark and cold environment of vast swampy plains, often covered in snow or ice. Unlike most owls, Snowy Owls are diurnal and hunt at any time during the continuous daylight of an Arctic summer. Usually they hunt small rodents, especially tunneling lemmings, which they locate through the snow with exceptional hearing. During periodic lemming population booms, scientists estimate that a pair of Snowy Owls, with a brood of nine owlets (a female will lay 5 – 14 eggs), will eat as many as 2,600 lemmings from May to September.

To survive the harsh climate, Snowy Owls have thick insulating feathers, making them North America’s heaviest owl. Yet they are still remarkably agile, so, although lemmings may be their preferred diet, they can also catch small birds in flight as well as squirrels, weasels, seabirds, rabbits, ducks, and other small creatures. John James Audubon (an American ornithologist, naturalist, and painter) reported seeing this remarkable owl sitting at the edge of an ice hole, where it waited for fish and caught them using its feet.

Male Snowy Owls are barred dark brown when they’re young and get whiter as they get older, whilst females keep some dark markings throughout their lives. One of the most remarkable characteristics of a male Snowy Owl is its amazing mating display. With large bold wingbeats and a lemming in his bill or talons, a male will ascend into the air. On the way back down, he holds his wings in a V-shape, and on descending drops his prey on the ground. He then lands and makes himself as tall as possible, bowing his head and fanning out his tail as the female approaches. If competition arises, he will hold out his wings and stick out the feathers on his neck to intimidate the rival male.

In winter (once chicks have fledged) Snowy Owls generally migrate; however, these journeys are varied and often unpredictable. Some North American Snowy Owls even remain in their summer breeding grounds year-round. Other North American Snowy Owls show up in southeastern Canada, the upper Great Lakes states, and New England.  Snowy Owls can be seen as far south as Texas and Florida in extreme years.  In these areas they look for landscapes resembling the Arctic tundra: open fields and marshes, beaches, large fields, and even airstrips.

Because Snowy Owls nest in remote areas and have huge territories and such varied migration patterns, estimating their population size is quite a challenge. According to the International Snowy Owl Working Group, there are far fewer Snowy Owls than were originally estimated, about 14,000 pairs rather than 300,000 individuals, and the numbers are declining.

Field researcher Denver Holt, founder of the Owl Research Institute in Montana, has been studying Snowy Owls on their breeding grounds in Barrow, Alaska, for 22 years. He began putting satellite-tracking transmitters on Alaskan owls in 1999, hoping to get a better picture of their movements. “Snowy Owls are an indicator of the health of the Arctic environment” he says, “When there are lots of Snowy Owls in my study area in Alaska, everything has a better year – ducks, foxes, weasels, geese, shorebirds, and more.”

One of the major concerns of the future of the Snowy Owl and the tundra ecosystem is climate change. Even a slight rise in temperature or partial thawing of the permafrost could lead to thicker vegetation, which will make it more difficult for Snowy Owls to catch lemmings.

Tom McDonald (who has been collecting data on these owls’ movements for the last 25 years) says “I have a lot of confidence in the Snowy Owl’s ability to adapt … their ability to take a variety of waterfowl and other birds will play a key role in the long-term survival of the species. But nest sites, in my opinion, are going to be in peril, and the birds might need to shift their nests closer to water to take advantage of waterfowl. How fast they’ll be able to adapt compared to the speed of the changes in the tundra—that’s the big question.”

Another researcher, Norman Smith, says, ‘There obviously is change going on in the Arctic. You look at a place like Greenland, where there’s been a transformation of some of the tundra from grasses to shrubs and even willow trees. That habitat is not suitable for lemmings, and if there are no lemmings, the Snowy Owls don’t breed.”

Snowy Owls are truly magnificent birds, the highlight of a birding tour for sure! 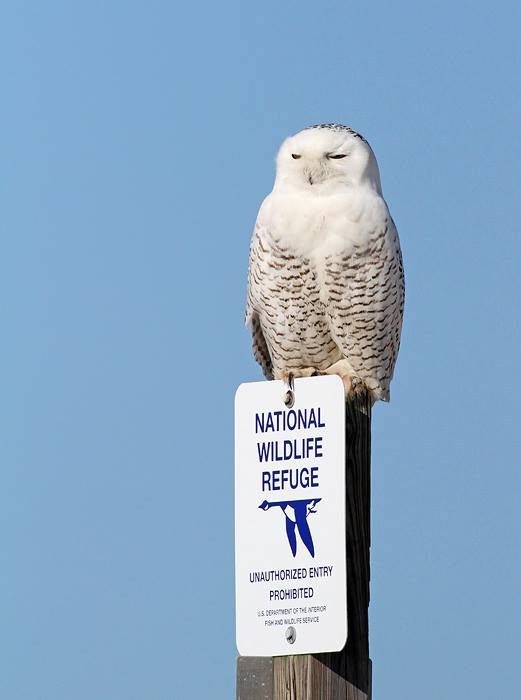 How to see a Snowy Owl?

You’ve come to the right place because owls are some of our favorite birds at Birding Ecotours! In fact, we have special owling tours, please do enquire about our Owls of the World tours to customize an option that suits you, or join our Finland and Norway: Taiga and Tundra Adventure or our Owls and Other Winter Birds of Minnesota Tour in January for a good chance to see this magnificent owl.