Note we can also run this day tour for 1 person, the cost for this would be £100.

Norfolk in spring is a county of change and contrast. April sees the cold of winter left behind and the return of warmth and growth to the coastal areas. The increased daylight hours signal the beginning of spring migration and this is the focus of our coastal spring birdwatching day tour. As we move into May, most of the migrant species are settled in and we can begin to witness the miracle of life in progress as the number of resident and migrant species reaches its peak. Our spring coastal tour will begin at 8am and finish around 4:30pm. With birders and other tourists gravitating to several well-known sites, we will instead head to some of the lesser-known areas of the Norfolk coast. We will come across a similar selection of species to those seen at better known sites but will hopefully enjoy our birds with less people around.

Northern Wheatear is one of the iconic migrant passerines that arrives in Norfolk in early-spring and is usually one of the first migrant species to pass through the area as they move between their sub-Saharan wintering grounds and northern European breeding grounds.

Spring heralds the arrival of the charismatic and fascinating Common Cuckoo. We should hear plenty on our tour of the Norfolk coast (read about their amazing migration here).

We will then walk along the sea wall as far as the dunes, adjacent to Norfolk Ornithologists Association (NOA) Holme Nature Reserve. Here we will find many of the species mentioned above plus some new additions, likely to include Common Shelduck, Little Egret, Eurasian Spoonbill, Great Cormorant, Eurasian Skylark, and European Stonechat. We will listen out for singing migrant warblers like Common Chiffchaff, Sedge Warbler, and Eurasian Reed Warbler. The marshes are also home to birds of prey such as Western Marsh Harrier, Red Kite, and Common Kestrel which all breed in the area.

Once we reach the dunes, we will head to the beach and search for a different range of species. A scan of the sea could reveal the first migrating terns with Sandwich Tern, Common Tern, and Little Tern all frequently seen here. Many of the shorebird (wader) species we may see on the walk out can find their way onto the beach where we may also come across a late Red Knot, Sanderling, or Ruddy Turnstone feeding on the tideline. Overhead we should see our first migrating hirundines and swifts with Common Swift, Common House Martin, Barn Swallow, and Sand Martin all moving through the area during this period.

With so much activity there is always the chance of something locally uncommon here and we will keep our eyes open for scarce species such as Eurasian Hobby, Lesser Whitethroat, Ring Ouzel, and Whinchat (all of which might be seen at other locations during the day).

We will then return along the sea wall back to the car park, stopping along the way to scan for birds, before finishing up our morning birding session.

Pied Avocet is one of the United Kingdom’s most elegant waders and is a common bird on the Norfolk coast during spring.

Before beginning the second part of our tour we will stop at the nearby Royal Society for the Protection of Birds (RSPB) Titchwell Marsh Nature Reserve for lunch and a toilet break.

The second part of our tour will start at the village of Burnham Overy Staithe. We will once again scan for shorebirds (waders), with species such as Spotted Redshank, Ruddy Turnstone, Green Sandpiper, Common Sandpiper, Pied Avocet, Eurasian Oystercatcher, Eurasian Whimbrel, Eurasian Curlew, and Northern Lapwing all usually present here. From here we will walk along the sea wall towards the dunes with the walk giving us fabulous views of Scolt Head Island. Our route is lined with reedbeds, hedgerows, and suaeda banks which will be alive with birdsong during this period and we will stop and scan at points that look favorable for birds. Key species here include Eurasian Reed Warbler, Sedge Warbler, Common Grasshopper Warbler, Common Chiffchaff, Willow Warbler, Common Whitethroat, Lesser Whitethroat, Eurasian Skylark, Cetti’s Warbler, European Goldfinch, Yellowhammer, and Eurasian Blackcap.

We will also stop and scan the saltmarsh for larger waterbirds. This area is a great spot to see Great (White) Egret and Western Cattle Egret, both of which have arrived in the area in recent years. These are joined by resident Little Egrets and Grey Herons, and we should come across Eurasian Spoonbill (another recent colonizer) in its sensational breeding plumage. This area has also proven a good site for the rare Purple Heron in previous years and the elusive Eurasian Bittern can also be seen here.

The presence of Eurasian Spoonbill in the area is a recent success story. They are now a regular breeding species on the Norfolk coast and we will hope to get good views of them.

The gorgeous European Turtle Dove has declined massively over the past 50 years (see Operation Turtle Dove for more information), but we will hope to locate this highly sought-after Afrotropical migrant by their beautiful purring call.

Walking further through the dunes towards the pine woodland of Holkham we may come across several birds of prey including Western Marsh Harrier, Common Kestrel, Common Buzzard, and Red Kite. The area is excellent for the migrant Eurasian Hobby which is common here during spring.

We will retrace our steps back towards the starting point once we have explored the dune system at length. The increasing daylight will mean we have plenty of time to cover the range of habitats found here and is sure to result in a great list of birds.

As alluded to above, this is also the time for rarer species to turn up on the Norfolk coast and it is exciting to imagine what might show itself on our tour. There are countless possibilities of unusual species we might hope to bump into during the day tour, so as with any migration spot birding, it is wise to expect the unexpected. In 2020 alone, rarities found along the North Norfolk coast during this period included Red-footed Falcon, Blyth’s Reed Warbler, Lesser Yellowlegs, European Bee-eater, Great Reed Warbler, and Pallid Harrier. 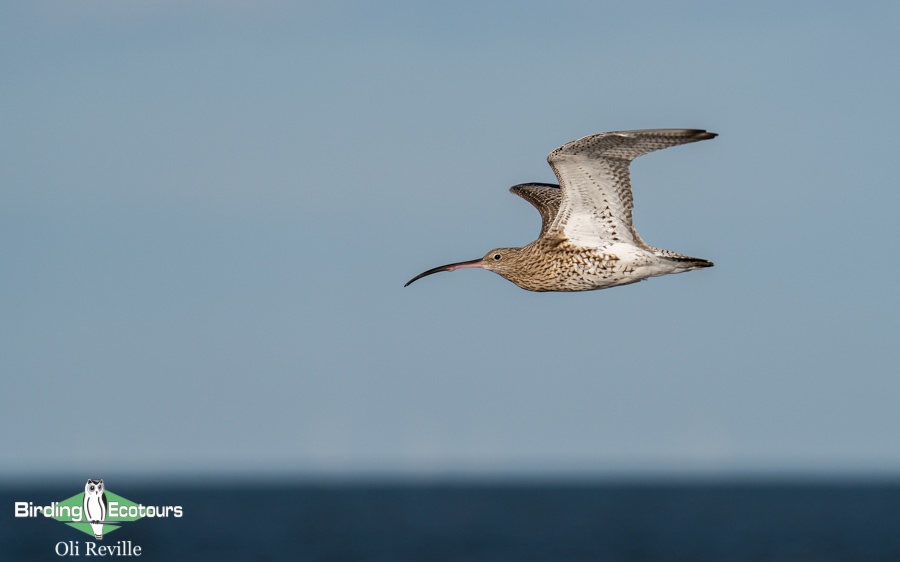