Photo tours are slightly more expensive than equivalent non-photographic birding tours because we keep more empty seats in the vehicle — for camera gear. 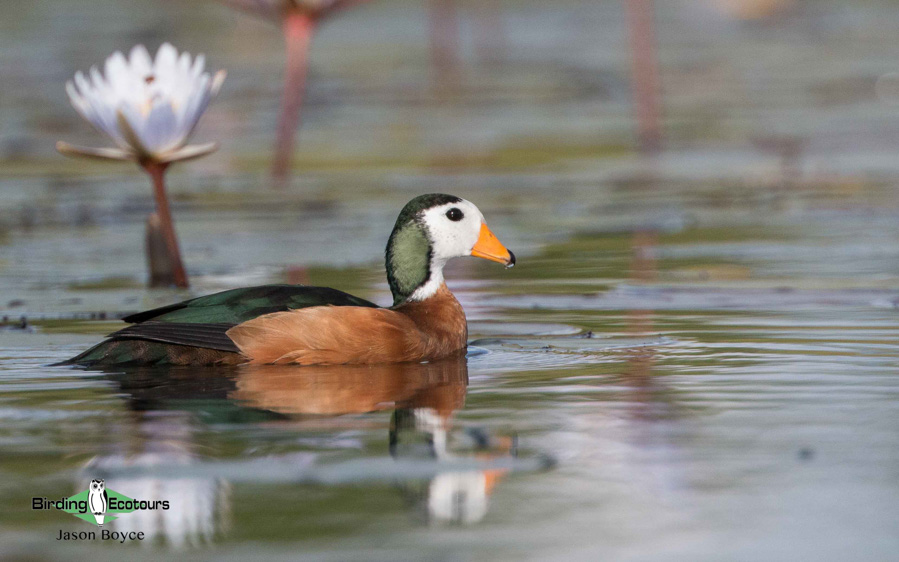 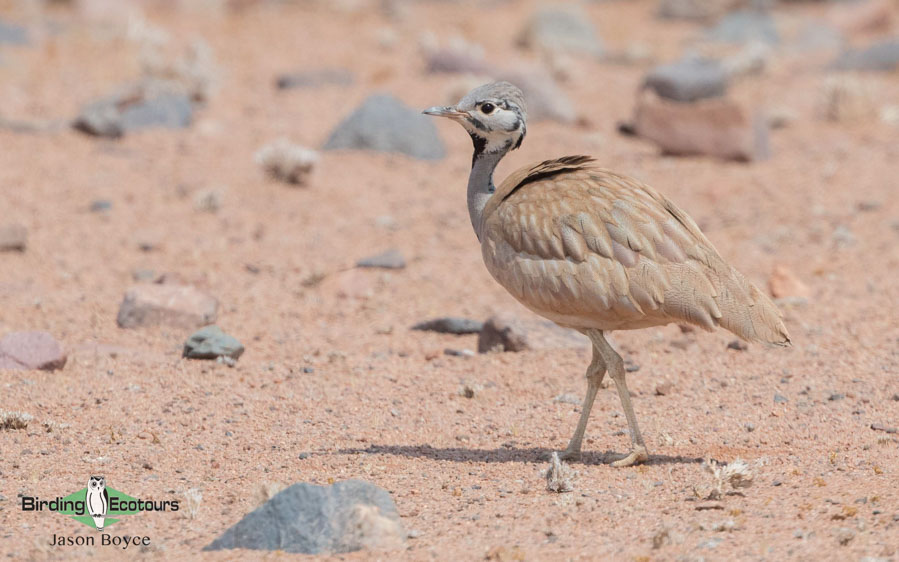 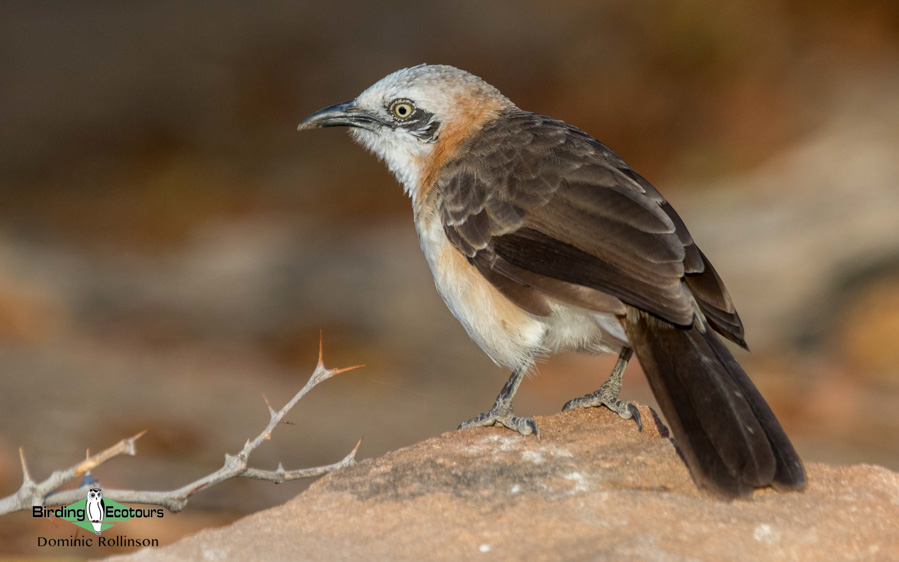 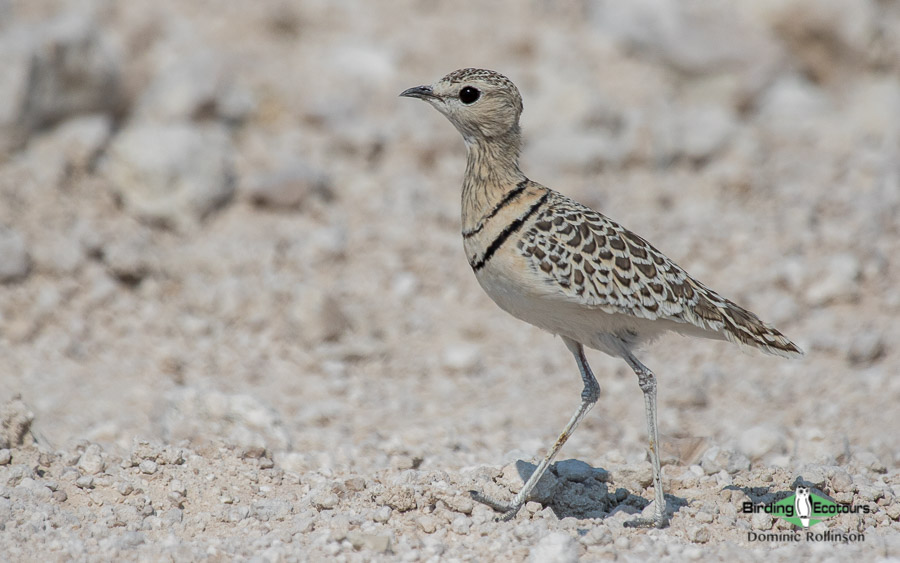 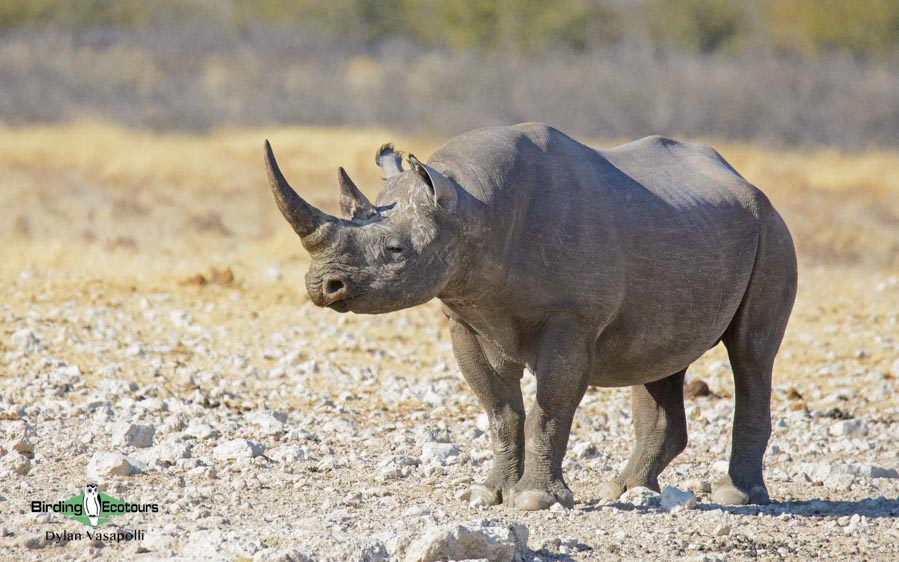 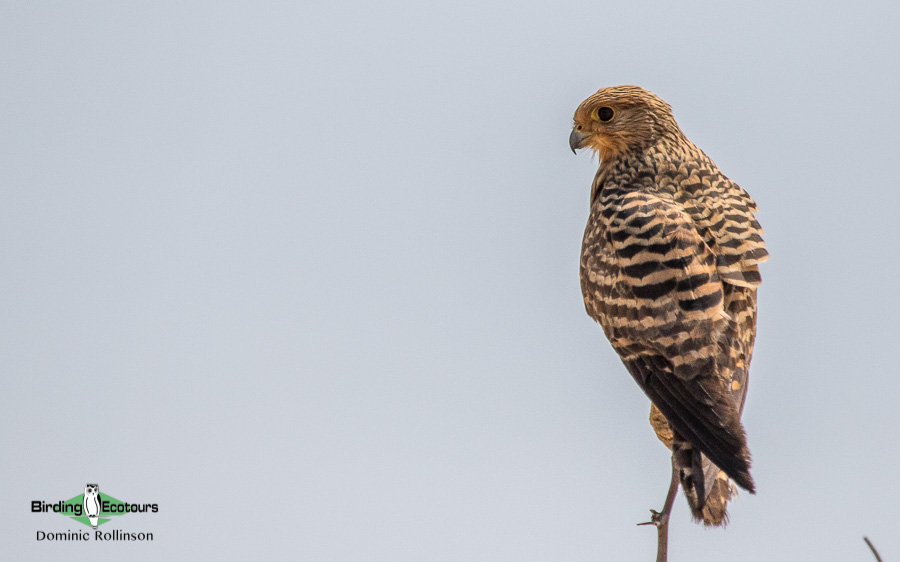 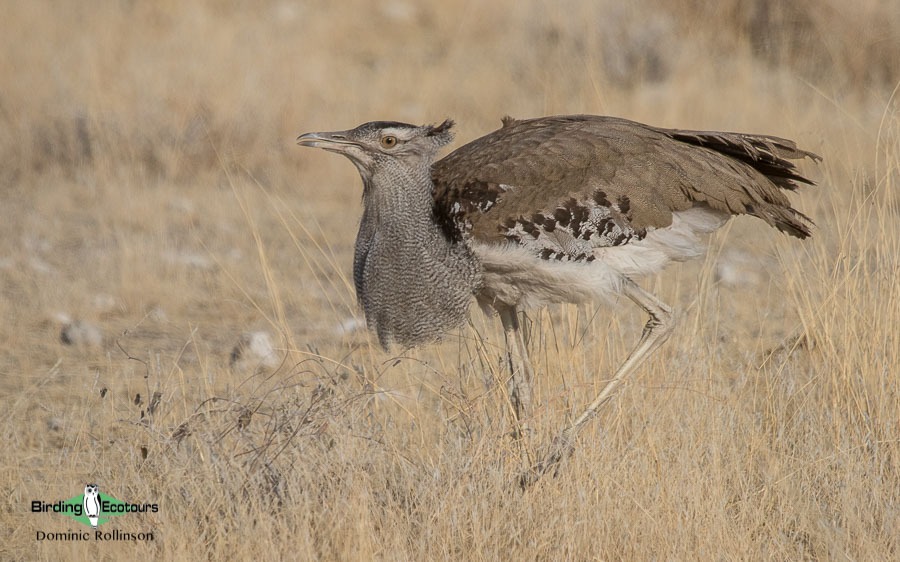 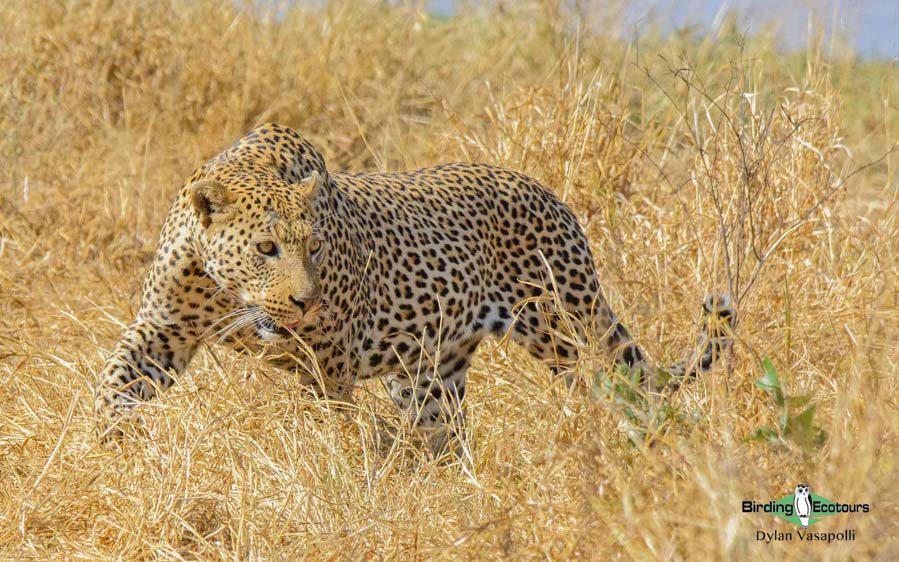 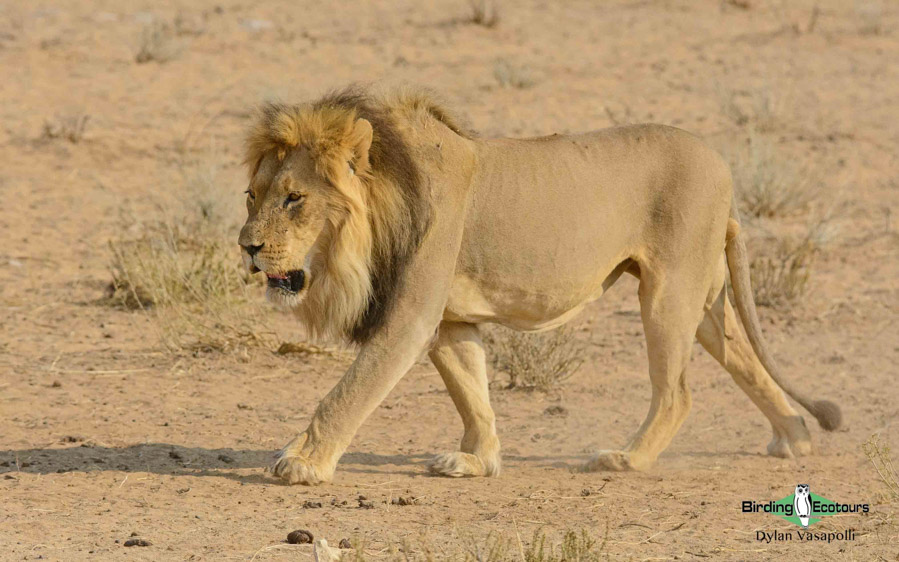 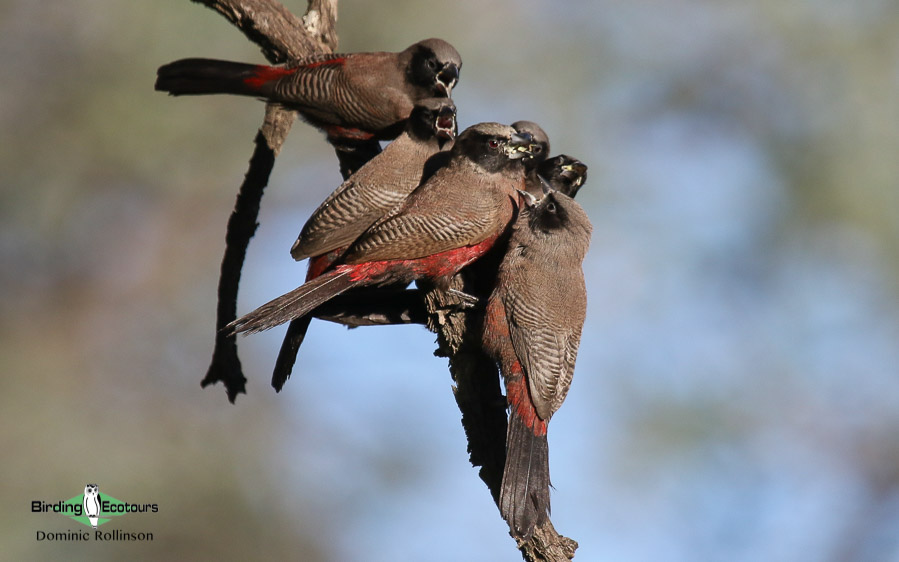 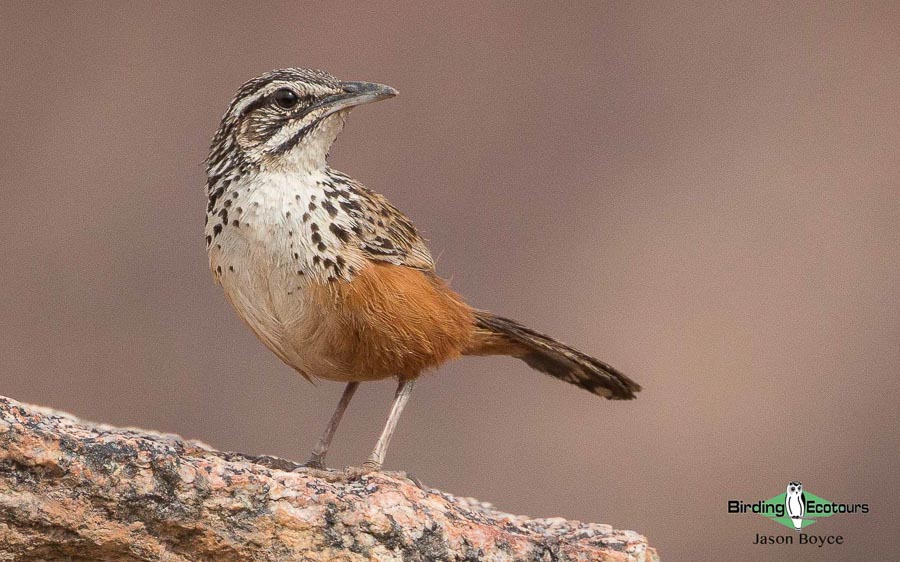 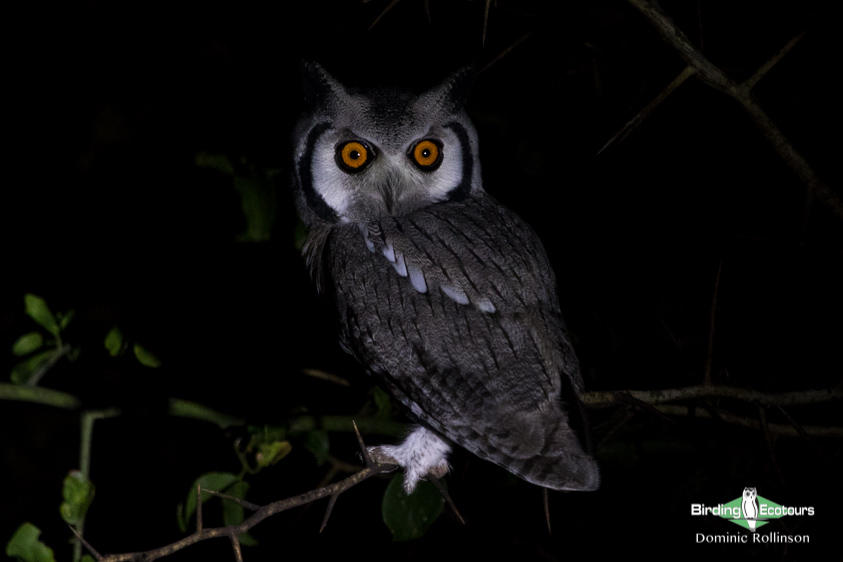 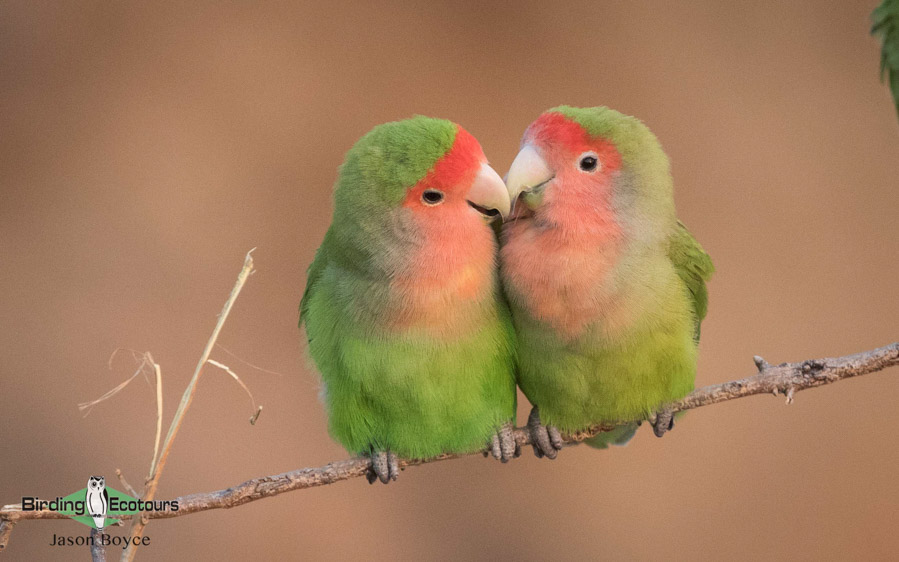 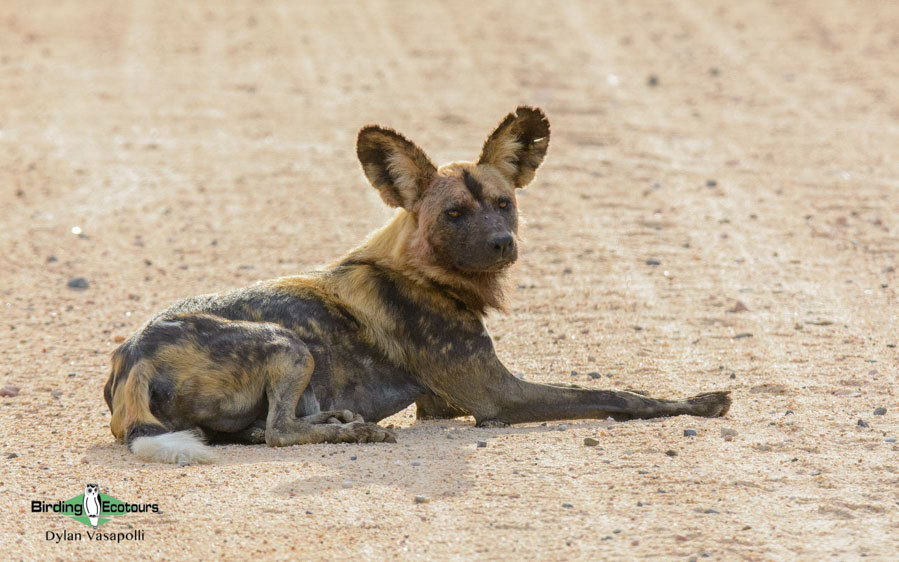 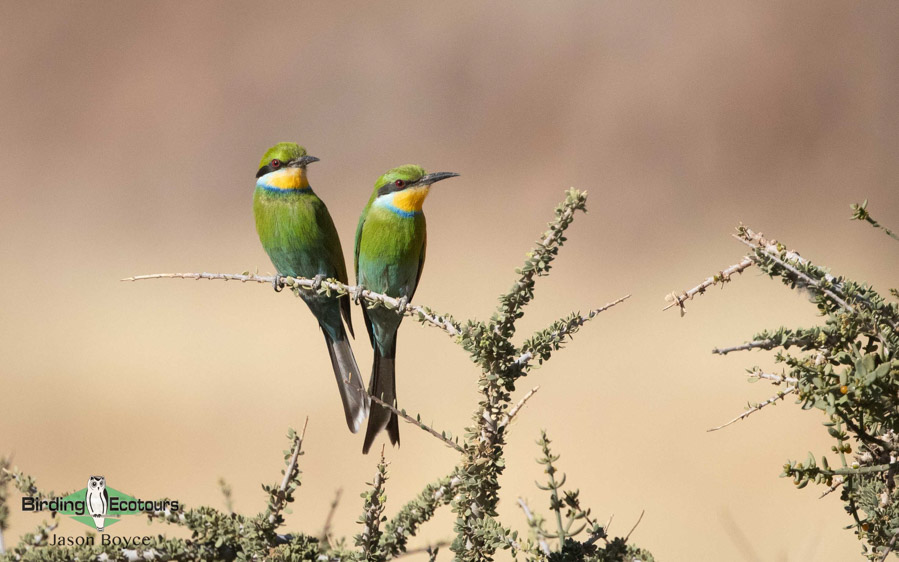 This is a photographic birding tour that gives you time in some of Africa’s greatest (no exaggeration!) wildlife havens. We begin the trip with three days in the rugged Erongo Mountains where, at the magical lodge we use, some localized and striking birds can be seen and photographed, truly up-close and personal, among the amazing rock formations. The middle part of the tour finds us in one of the continent’s finest game parks, Etosha. Here Lions and other big cats, African Elephants, rhino, Southern Giraffe, and a plethora of other big and small mammals roam freely among some spectacular birds, such as Crimson-breasted Shrike, Secretarybird, various owls (some of them at their daytime roosts), and all the others. Floodlit waterholes at the park’s lodges provide awesome and rather easy photographic opportunities. Finally, we bird the panhandle of the Okavango Delta in Botswana – this inland delta is of course world-famous and needs no introduction. All in all, this 12-days tour gives an absolutely dream African experience, and it allows time for photography.

The batis-like White-tailed Shrike should be seen at a number of locations on this trip.

After our international flight arrives in Windhoek we head west for the Erongo Mountains (three hours’ drive with no stops) on the edge of the Namib Desert. At Ai-Aiba Lodge, where we spend three nights, noisy flocks of Rosy-faced Lovebird are commonly encountered, with small coveys of the localized, bizarre and highly secretive Hartlaub’s Spurfowl occurring nearby. A host of other exciting and colorful birds may also be encountered around the lodge grounds, providing for some great photographic opportunities. The fabulous White-tailed Shrike is common in the general area too. This species – like several of the birds here in the Erongo Mountains – is restricted to northern Namibia and southern Angola. Cape Porcupine is also sometimes seen on night drives in the area. Other mammals, such as Greater Kudu and Kirk’s Dik-dik, are fairly common in the bushier landscape. The secretive but striking Kaokoveld Slender Mongoose often gives fleeting views (if seen at all!), and rarely poses long enough for photographs. At dusk Freckled Nightjar usually appears and makes its dog-like “bow-wow” call. A morning walk usually easily generates Rockrunner, another strikingly marked, characterful, and localized bird. A drive from the lodge to nearby dry riverbeds lined with tall Camel Thorn trees can be good for Rüppell’s Parrot and Violet Wood Hoopoe. Time-permitting, a walk to nearby caves with stone-age rock paintings is worthwhile.

We have a half day’s drive to Etosha National Park, where we spend two nights at Okaukuejo Camp in comfortable chalets. The floodlit waterhole here must be one of the world’s best places to see the rare Black Rhinoceros. Loads of other animals and birds come here to drink day and night, including African Elephant, Plains Zebra, Springbok, Double-banded Sandgrouse, and a host of others. Verreaux’s Eagle-Owl, Western Barn Owl, Grey-hooded Kingfisher, Crimson-breasted Shrike (Namibia’s absolutely brilliantly colored national bird), and Sociable Weaver (with its humongous nests) also frequent the camp. Venturing out of the camp in our vehicle (due to the presence of dangerous animals it is illegal to alight from the vehicle) on birding/game drives, we will look for Pygmy Falcon, larks, Double-banded Courser, Secretarybird, Ant-eating Chat, Lion, Cheetah (this cat is rare, but Etosha provides a fair chance at it), and a host of others.

After final wildlife photography at Okaukuejo we head into the heart of Etosha and spend two nights at Halali Camp – which is in a completely different habitat (mopane woodland instead of open plains and savanna). The floodlit waterhole at this camp is at least as good as the one at Okaukuejo; in fact it provides a better chance at Leopard (especially if you are willing to spend hours there at night with a bottle of wine – it can be a tough life in Africa!). We sometimes find five different owl species at Halali – on a recent visit there we located Southern White-faced Owl, African Scops Owl, and Western Barn Owl at their daytime roosts, in addition to active Pearl-spotted Owlet – this is a pygmy owl species that is active both day and night. Honey Badger is known to lurk around the camp at night.

Southern White-faced Owl can be seen on our night-time excursions.

We spend our last two Namibian nights (before proceeding to Botswana) at Mushara Lodge on the far eastern side of Etosha just outside the park. Once again the eastern side of Etosha presents a very different habitat compared to the two camps we will have been to. Gangs of Banded Mongooses are very tame around here, and this gregarious, gorgeously cute, and well-marked animal provides much entertainment and seems to love being in photos. Many Acacia birds are found in this area, and with luck we might even see Red-necked Falcon. A drive to the interesting plains to the north of the camp often generates beautiful Blue Crane (near-endemic to South Africa except for an isolated population here in Etosha), Eastern Clapper Lark, herds of game, and much else. An extension of the massive Etosha Pan or “the Great White Place” itself, Fischer’s Pan, sometimes holds large amounts of water, unlike most of the rest of this ancient “wetland” (now dry in modern times).

We have a long drive (at least half a day) to the Okavango. We head northeast from Namutoni, eventually reaching much less arid areas, soon finding ourselves in Namibia’s tropical Caprivi Strip. Eventually we meet the Kavango River, which we then follow southward into Botswana. Here in Botswana this large river spreads out into the panhandle of the incredible Okavango Delta – eventually the thirsty Kalahari sands absorb the entire river, preventing it from ever getting to the sea. The Okavango Delta is a humongous oasis, consisting of papyrus-lined channels, riverine, forest-covered islands, and quiet backwaters. Crocodiles and Hippopotamuses are common in these swamps, as are a plethora of herons (including some quite rare ones, such as White-backed Night Heron, Rufous-bellied Heron, the very localized Slaty Egret, etc.), and kingfishers (from the minute Malachite Kingfisher to the huge Giant Kingfisher – and everything in between). Several different bee-eaters add an awesome splash of almost unbelievable rainbow colors, and one of the most spectacular sights is arguably the most spectacular species, Southern Carmine Bee-eater, breeding on sandbanks along the river. Many of these birds mentioned can be approached very closely by boat – which is how we spend much of our time birding here in the delta. One of the great prizes of the Okavango is Pel’s Fishing Owl, which we usually find without many problems, along with African Wood Owl and African Barred Owlet. Brown Firefinch, African Pygmy Goose, and hornbills, and a rich diversity of other birds will also be sought here.

We’ll search for Pel’s Fishing Owl in the Okavango Swamps.

We have a four-hour-long drive to Maun for our flights home. 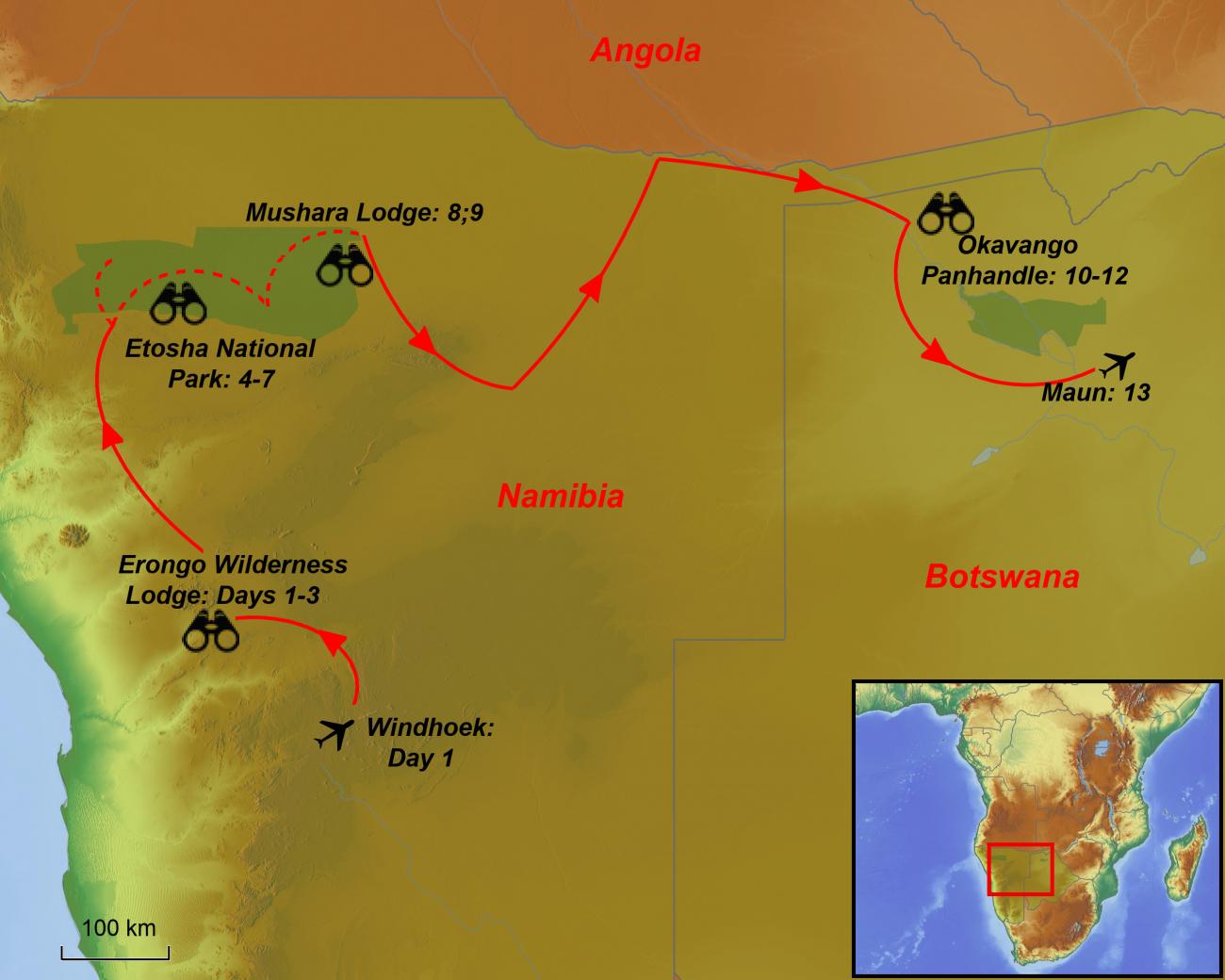 Bo Beolens of Fatbirder put me onto Chris Lotz of Birding Ecotours originally. What a favour he did me. Not only is Chris an excellent birder, but he goes out of his way to be really helpful.

I and my partner settled on Namibia with Birding Ecotours as our next trip, and as we were in Jo`burg visiting friends a few days before the trip, I asked Chris if he could also arrange for me to see Flufftails in the gap available. The hub of Birding Ecotours couldn`t have been more delightful to deal with. Not only did he get very excited by this challenge, but took it upon himself to do our guiding. He found an equally enthusiastic birder, Kevin, to join the trip and off we set for the Dullstroom area, where there was a Striped Flufftail guide, all revved up and ready to go except it was miserable weather. Never mind, a quick re-calculation and we descended down to Nelspruit Botanic Garden and sunshine, and spent half a day revelling in Sth. African birds. Then we ascended and went lark and pipit hunting which Chris found by call. He also found us an Oribi which was stunning, we were so close.

Chris and his guide worked extremely hard the next day, trying to call out a flufftail . We could hear them but the thick vegetation prevented any views of them. After doing a circuit of the whole area, Chris and the guide doing more, as they were going up and down the hill , we were losing heart. Luck returned as Chris planted us by a carefully placed mp3 playing flufftail, and a narrow trodden path into the bracken. We waited as the sound of another flufftail got closer.

I could hear Kevin hyperventilating as he suddenly found himself looking at a full frontal view of a male Striped Flufftail. As I was at a slightly different angle, I couldn`t see this marvellous apparition, but found myself breathing hard in anticipation when, from behind the clump of grass I was straining to see through, a female suddenly leapt across the gap like a frog, so fast that all I got was a view of the back and tail! No wonder they are a difficult bird to get to grips with but I would recommend this sort of diversion to anyone. I wouldn`t have climbed the hill after the Cape Eagle Owl if it wasn`t for Chris`s infectious enthusiasm either, and we were sorry to see both of them go; they had been so easy to get on with, both entertaining and amusing

We flew to Walvis Bay a few days later to meet Steve Braine, our leader for the Namibia trip, and the rest of the participants. We found that Steve was a born and bred Namibian and knew the country like the back of his hand. He knew exactly where everything was, and if he didn’t, he had a hot-line to somebody who did.

Fortunately the rest of the group were a relaxed bunch and very talkative and entertaining, and soon Steve had everyone fixated on birds. Steve and his bird knowledge is fearsome. He worked tirelessly, always on the go arranging the next highlight, repeating things if he thought anybody had missed out. He knows all the mammals, all the reptiles, loves scorpions and even dabbles with Lepidoptera.

We were all beginning to think he was some kind of magician a week into the trip.

There are sights on this trip you will never forget. For me, even the sight of a line of larks, all squashed together along a 1 inch wide line of shade under a notice board was spectacular.

The plumage of desert birds looking like ink etchings: I could go on.

Steve is an extremely good leader and I for one am grateful for his excellent birding skills and tireless driving.