A 5-day twitch to Namibia 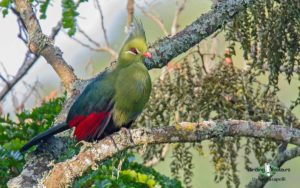 Not only was the first ever Yellow-throated Leaflove discovered just inside the southern African listing region this year, but it was actually not just one individual but a pair of them, building a nest and raising two youngsters! This means that a great many birders had to visit the Caprivi Houseboat Safari Lodge in Namibia’s eastern Caprivi Strip (near where Namibia meets Botswana, Zambia and Zimbabwe), to get this bird onto their regional lists! This is an extension of the known range of this species but a couple of hundred kilometres. 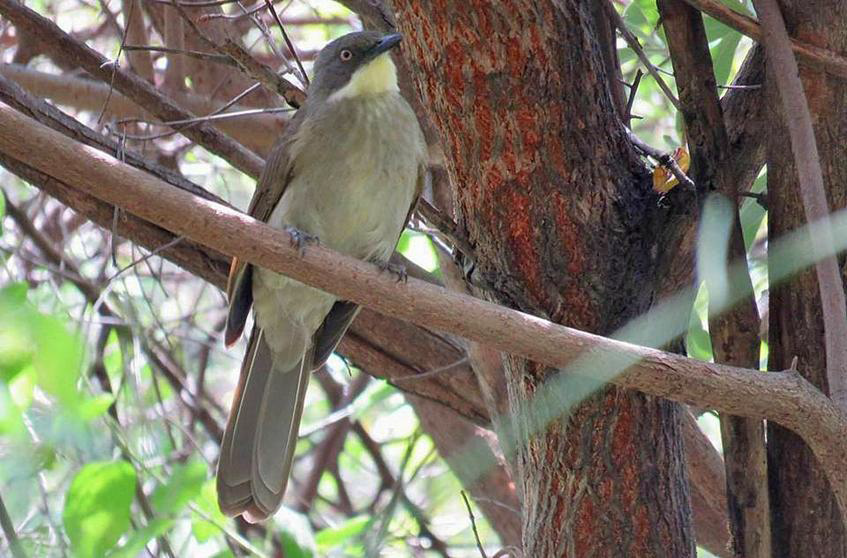 In addition, a female Garganey (an extremely rare vagrant to our listing region) also managed to find its way to Namibia. While many birders had already twitched the leafloves before they heard news of the Garganey, the fact that we were slow actually paid off this time (not that I’m advising this as a twitching strategy – usually it’s better to be fast!). A lot of birders had to take a second flight to Windhoek to “get” the Garganey, and at least one birder I know of who arrived a day after us missed it. Luck was very much on our side, as it seems we may have only just been in time for both species. Judging from our success (also with other tough species we were targeting as per the below), I think that my travel companion for this trip, John Neville, must surely bring luck along with him, and I’ll certainly try my best to travel with him again!

John also had a short-list of other target birds, and I personally wanted to try and get better acquainted with some old friends in the form of tough-to-find species, especially Sharp-tailed Starling (perhaps Namibia’s most elusive special) and flooded-grassland-loving Striped Crake, both of which we found. The additional target birds we located for John were Chestnut Weaver (sadly no breeding males, though), the stunning and usually tough-to-find Burchell’s Sandgrouse, and the ornate-crested Schalow’s Turaco. Other good birds were Sousa’s Shrike, Rufous-bellied Tit, and stacks of spectacular-looking seed-eating birds such as Violet-eared Waxbill, Shaft-tailed Whydah, and Long-tailed Paradise Whydah. We also saw quite a number of good mammals, and a huge black mamba was crossing the road in front of us at Okonjima on the last morning of the trip. I’d like to thank Dayne Braine, Niall Perrins, and Nick Buys for some useful gen that helped “get” us a couple of the tougher targets.

We took an early-morning flight from Johannesburg to Windhoek, collected our rental vehicle, and immediately headed northward, stopping at a large colony of Chestnut Weaver en route. A noisy Ashy Tit tried to steal the show. Red-headed Finches were also around, lazily using old Chestnut Weaver nests instead of building their own. Sadly none of the Chestnut Weavers were in breeding plumage, so John ticked the species without the satisfaction he would have liked. This, however, was arguably compensated for the fact that we were looking at the female Garganey (and several other duck species, including all three southern African teals, and quite good numbers of shorebirds) by mid-afternoon as we drove around the Otjiwarongo settling ponds. A female Greater Painted Snipe (this is one of the few species in which the female is more spectacular-looking than the male) and various other nice birds were also around.

We had plenty of time to then leisurely drive to the scenic Waterberg Plateau National Park and spend some time relaxing before trying in vain to get visuals of Freckled Nightjar, which called, dog-like (with their “bow-wow” territorial calls), high up on the cliffs. We also heard four owl species. The Waterberg Plateau is one of the best places for Hartlaub’s Spurfowl, Rockrunner, Rosy-faced Lovebird, Rüppell’s Parrot, Monteiro’s Hornbill, and other classic Namibian specials, but we did not try for these, only hearing some of them. We saw six bee-eater species during the trip, many of them putting in a first appearance today. Blue-cheeked Bee-eater, Southern Carmine Bee-eater and Swallow-tailed Bee-eater are always particularly nice to see.

We left early as we had a long – 1100 km (670 mile) – drive. First we had to get to the western edge of the Caprivi Strip, and then we had to drive almost 500 more kilometres through this long finger of land wedged first between Angola and Botswana and then between Zambia and Botswana. In 1890 the then German chancellor Leo von Caprivi made a deal with the British to make this strip of land part of “German West Africa” to get access to the mighty Zambezi River and thus (supposedly) to the east coast and thus the Indian Ocean (the only problem, of course, was Victoria Falls, which lay just to the east of the Caprivi Strip, bordering on Zambia and Zimbabwe).

Thanks to the brilliant Namibian roads and paucity of traffic (Namibia is refreshingly sparsely populated), we got to Katima Mulilo in time not only to see Yellow-throated Leaflove very well, but also to embark on a very pleasant and relaxing sunset boat trip (adding a lot of good birds to our list), and also seeing the truly spectacular-looking Schalow’s Turaco in the lodge gardens that very same afternoon. A highlight during the boat trip was close-up views of a pair of Senegal Coucal, disputing where the territorial boundary should really lie with a pair of White-browed Coucal. Another highlight were all the closeup bee-eaters of various species. Brightly-colored Allen’s Gallinules showed very well, and Olive Woodpecker was good to see in the riverine forest. Various bishops, weavers (including the very bright Southern Brown-throated Weaver), and a lot of others also entertained us.

We spent the night at https://www.zambezisafaris.com/, which is now very much on the local birding map as the place where the leafloves arrived from the north. It can also be a very good site for night boat trips, where chances of Pel’s Fishing Owl and African Finfoot are high, and White-backed Night Heron abounds. Since the Zambezi water levels were very high when we arrived (unlike when many of the previous twitchers had visited), we did not feel it was very likely we’d find these birds, so we did not do a spotlighting boat trip this time (although on previous tours we’ve had good success doing so).

After enjoying a nice breakfast on the banks of the Zambezi River (admiring pairs of pretty African Pygmy Goose flying past and a pair of African Wood Owl roosting in the lodge grounds), we went into the town center of Katima Mulilo to see Northern Grey-headed Sparrow (extremely localized in our listing region), then stopped on some flooded grassland, where we managed to get excellent views of a female Striped Crake! Our next stop was for a Hobby, but we did not get good-enough views to know whether it was the sought-after African or the more common Eurasian. We did get good views of the localized Bradfield’s Hornbill, though. Eventually we made our way back all the way through to the Western Caprivi, where we stayed at the pleasant (and, more importantly, perfectly located for our next targets), Shankara Lodge virtually midway between the small Caprivi towns of Divundu and Rundu.

This accommodation is situated on the banks of the Okavango River (known as the Kavango River in Namibia) in prime position for some extremely localized dry-woodland species in the form of Rufous-bellied Tit, Sousa’s Shrike, and Sharp-tailed Starling, all of which put in an appearance for us. We saw a flock of seven of the starlings, which we were pleased with, as this is a truly enigmatic south-central African endemic. Indeed, it must be the most-often missed of the Namibian specials, as it’s missed more often than Cinderella Waxbill or Herero Chat. We also saw other good birds today, like soaring Abdim’s Stork and a pair of Dusky Lark (which can be very tricky to find, as it is nomadic, unpredictable, and scarce).

We enjoyed birding the dry woodlands of the Western Caprivi (adding some nice birds such as an adult as well as a puzzling (at first) juvenile African Cuckoo-Hawk, along with a close-up Ovambo Sparrowhawk, a perched Lanner Falcon and several other raptors, along with Mosque Swallow, African Golden Oriole, and other goodies), before heading to Okonjima (https://okonjima.com/). This is the home of the AfriCat Foundation, which promotes the conservation of big cats. But (importantly to us) is one of the easiest places to see the usually elusive Burchell’s Sandgrouse (which we indeed got great views of, followed by fantastic views of a huge black mamba crossing the road). Southern Pied Babbler, Crimson-breasted Shrike (Namibia’s national bird, a dazzlingly beautiful one at that!), and truly spectacular seed-eating birds all added to the enjoyment.

We spent over an hour trying to find a breeding male Chestnut Weaver, but without success. We did see some other good birds today, however, such as Red-footed Falcon, Damara Red-billed Hornbill, and various others. Eventually we headed back to the Windhoek airport for our flight back to Johannesburg.
All in all, this was a splendid little trip to scenically spectacular Namibia! We are purposefully not adding a bird list to this trip report as we were very self-disciplined and deliberately focused only on a small handful of target species. It’s easy to get distracted by the temptation to stop for example at Roy’s Camp (which was right on our route) to augment the list with high quality species, in this case (Roy’s Camp) Black-faced Babbler. But we resisted that temptation and thus were very successful with our actual targets.

I recorded almost 200 species including heard ones, and John counted 158 birds seen by him. The mammal list was eleven species, including the very small, localized Damara dik-dik. But we’re not including bird and mammal lists here, since for many of the species recorded we did not have time to admire them very well anyway, apart from the ones mentioned in the text above. It would thus be misleading to show a list here that includes a lot of birds seen only briefly. However, we of course do have a good number of recent trip reports with full bird and mammal lists, at https://www.birdingecotours.com/trip-reports/namibia – including several for our comprehensive 18-day Namibia, Okavango and Victoria Falls birding tour, one of our most popular trips. This trip usually generates close to 400 bird species and one of the best mammal counts of any of the tours we do in Africa and worldwide.