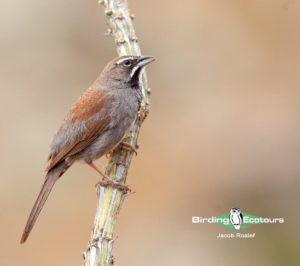 We enjoyed nice looks at Five-striped Sparrow, one of the top targets on this trip.

Southeast Arizona is a land full of beauty with an incredible diversity of avian life, habitats, scenic views, and other wildlife. On this custom-made, 8-day tour we fully experienced this land’s diversity, ranging from the extreme heat of the desert and lowlands to the lush conifers on top of the canyons. The trip began and ended in Phoenix to include a few specialty birds, and from there we traveled through the canyons of southeast Arizona. 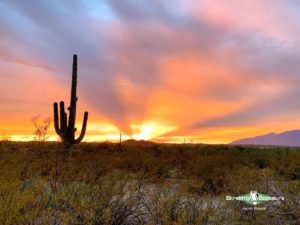 Gorgeous sunsets were almost a nightly occurrence over the beautiful desert and canyons of the region.

The tour began around noon when Kieran and Pattie were picked up from the Phoenix airport rental car center. From there we stopped for a quick bite to eat before continuing to Encanto Park, located in the heart of the big city. It didn’t take long before we heard and then saw a small flock of Rosy-faced Lovebirds, an established parrot species here and countable for ABA listing. We scanned the rest of the park quickly and were treated to mostly common city birds, but there was a nice Ring-necked Duck mixed in. We then continued west out of the hustle of the big city to check on a few areas with water. First was the Glendale Recharge Ponds, which hosted a few shorebirds including Baird’s Sandpiper and Western Sandpiper. Pattie also excellently spotted an adult Bald Eagle flying by. Next was the Lower River Road Ponds, where we enjoyed great comparison looks of Neotropic and Double-crested Cormorants perched next to each other. Our final birding stop of the day was the famous Baseline Road thrasher spot. Unfortunately conditions were extremely hot, which made for tough birding, but we eventually got a flash of LeConte’s Thrasher, which we labeled as a BVD (Better View Desired). We continued searching with no avail but did enjoy a fly-over Lesser Nighthawk in the early evening. Then it was off to dinner and the accommodation in Chandler from here.

We started the day with some morning birding at Sweetwater Wetlands Park. This small park in Tucson was a pleasant area to hike around in the morning before it got too hot. We enjoyed views of a bright-red Vermilion Flycatcher as well as quite a few Abert’s Towhees hopping around. Things really started to heat up around mid-morning, so we headed up Mt. Lemmon for some altitude birding. We hiked around Rose Canyon Lake, where things were considerably cooler, but we were unlucky with our target bird (more to come later). We did, however, enjoy some point-blank looks at Yellow-eyed Junco. We did a little exploring around the campsites until we finally crossed paths with the mixed flock we were hoping for, which contained Grace’s Warbler, Pygmy Nuthatch, Plumbeous Vireo, Cordilleran Flycatcher, Greater Pewee, and others. A Rufous Hummingbird was certainly interested in Pattie’s hat and almost flew right into the car for further investigation! We continued farther up the mountain for a lunch stop and picked up a few more species at feeders, such as Broad-tailed Hummingbird and Pine Siskin.

The afternoon was spent driving to Madera Canyon and our next accommodation stop, Santa Rita Lodge. We managed to arrive with just enough daylight to quickly head out to Box Canyon, where we finally scored Five-striped Sparrow, our top target species, and a nice Scott’s Oriole. A great finish to our second day!

We started the day with a relaxing morning by the Santa Rita Lodge feeders, where we enjoyed a few great species like Rivoli’s Hummingbird, Arizona Woodpecker, Hepatic Tanager, Rufous-crowned Sparrow, and Bullock’s Oriole. The rare and elusive White-nosed Coati even made several visits, and with a little luck everyone could enjoy this inquisitive mammal! We then made our way to Florida and Box Canyon, where we were able to find the rare Black-capped Gnatcatcher, an adorable Lucifer Hummingbird nest with two babies, and a jaw-dropping Varied Bunting foraging low to the ground. We then continued south to the De Anza trail in Tubac, which unfortunately had recently experienced some path-altering weather events. There were still loads of new birds for the trip, though, like Tropical Kingbird, Inca Dove and Common Ground Dove, Rufous-winged Sparrow, and Phainopepla. Next up was the Patagonia Rest Stop, which treated us to a family of Thick-billed Kingbirds perched in the tree right over our car. To finish the day we decided to head to the Ash Canyon B&B, which had recently enjoyed hosting a rare hummingbird as well as an occasionally quail. Unfortunately, the hummer never made an appearance, but we did hear a few great birds in the distance like Montezuma Quail, Elegant Trogon, and Grey Hawk. 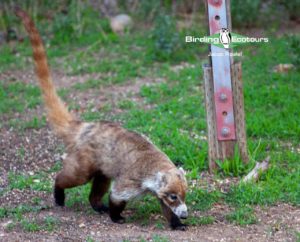 The inquisitive White-nosed Coati visits the feeders and drinks the hummingbird sugar water!

We started this morning very early, back at the Ash Canyon B&B for one last effort on the Plain-capped Starthroat rarity or a visual of Montezuma Quail. After a few hours waiting, however, enough was enough. We spent the better part of the day at Carr Canyon, one of the many spectacular canyons in the Huachuca Mountains. On the drive up we managed to score a quick look at Woodhouse’s Scrub Jay, a recently split species. The Reef Townsite Campground was particularly slow that morning, but we showed great patience and resilience. Finally we were rewarded with views of Buff-breasted Flycatcher, Spotted Towhee, and Hutton’s Vireo. We did a bit of hiking to a nice overlook area, thanks to the tip of another birder, and were treated to spectacular, top-down views of a Zone-tailed Hawk! Then we continued our way to the top, but things were slow and quiet. All we managed were a few Painted Redstarts.

After lunch we finished the day at the San Pedro House hiking trails, a nice system of trails with a good variety of habitat and a gift shop. The weather was getting rough, but we scored some close views of Botteri’s Sparrow and Yellow-billed Cuckoo. There was also a Western Screech Owl that would occasionally poke its head out while roosting in a cavity in a giant cottonwood tree. After about two hours the weather had wiped us out, and we decided to call it a day. We enjoyed a nice dinner near our hotel in Sierra Vista.

The morning was spent in the expansive grassland habitat of Las Cienegas National Conservation Area. Right away we were treated to close views of a singing Cassin’s Sparrow, and in the distance a Swainson’s Hawk was perched in a small tree. The immediate success upon entering this grassland had been a sign, and the hits at Las Cienegas just kept coming with Eastern Meadowlark, Grasshopper Sparrow, Botteri’s Sparrow, over 20 more Cassin’s Sparrows, Cassin’s Kingbird, American Kestrel, and Lark Sparrow. A stop at the small cattle ponds netted us a few Lucy’s Warblers, Black Phoebe, and Brown-crested Flycatcher. Finally we made it to the colony of Black-tailed Prairie Dog, a species extirpated from the state and currently undergoing reintroduction programs. Joining these fun mammals was a whole family of Burrowing Owls. 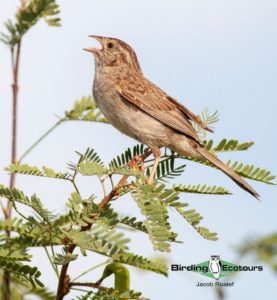 One of the many singing Cassin’s Sparrows.

The afternoon was spent at Ramsey Canyon, where we got onto a nice Sulphur-bellied Flycatcher in the parking lot. We then hiked about half a mile up when Kieran spotted the Whiskered Screech Owl about which a nice gentleman had tipped us off. Back at the bottom a lovely Violet-crowned Hummingbird was sitting on its nest near a feeder station. We decided to head back to the hotel to rest a little and get dinner before heading out for a little nighttime birding. After dinner we returned to Carr Canyon, and at the lower canyon picnic area we managed to hear Common Poorwill calling from the rocky, lowland scrub.

We were up and out of the hotel early to begin our journey toward Portal and the majestic Chiricahua Mountains. We started by driving along Stateline Road, where we eventually caught up with Bendire’s Thrasher. We watched it fly from the left side of the car in Arizona across the street to the right side of the car and land in New Mexico. A double-state tick! Along the road we also encountered a few more nice species like Greater Roadrunner, Black-throated Sparrow, and Pyrrhuloxia. Next we visited a few feeder stations in the Portal area. These feeders were bustling with wildlife, including over 50 Gambel’s Quails, Canyon Towhee, Blue-throated Mountaingem, and Harris’s Antelope Squirrel, and we even heard Crissal Thrasher.

From here we began our journey up the mountain, where we enjoyed lunch at a campground with a few Yellow-eyed Juncos. After lunch we birded along the road between Onion Saddle and Barefoot junction, which is loaded with conifers. Right away a few Red Crossbills were getting a drink from a small puddle in the road. After a few hours of searching, we came across a few mixed flocks that were absolutely loaded with different species, including Hairy Woodpecker, Olive Warbler, Brown Creeper, Bridled Titmouse, Grace’s Warbler, Black-throated Grey Warbler, Painted Redstart, Pygmy Nuthatch, House Wren, and Bushtit. Our last stop of the day was the feeder station at the George Walker House in Paradise. Unfortunately our time here was cut short due to an incoming thunderstorm. We decided to head back down the canyon before any potential flooding occurred. 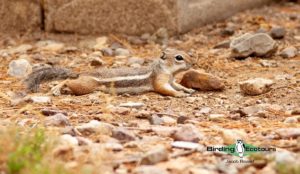 The adorable Harris’s Antelope Squirrel waiting for its turn at some bird seed.

We spent the early hours of the morning at Lake Cochise just outside of Willcox. An oasis of water in an otherwise dry desert, this lake was teeming with waterbirds. Hundreds of shorebirds like American Avocet, Black-necked Stilt, and Wilson’s Phalarope were covering the water’s edge. Larger waders and ducks such as Great Blue Heron, White-faced Ibis, and Cinnamon Teal were foraging in the slightly deeper sections, while Barn and Tree Swallows were zooming around catching insects. We continued on our journey back to Phoenix and made a quick stop in a small town called Saint David. A pair of Mississippi Kites were nesting in the neighborhood, and it didn’t take long before we were treated to great looks of this amazing raptor.

We decided to give Mt. Lemmon one more try, and this time it sure didn’t disappoint! Back at Rose Canyon Lake we waited for only about 15 minutes before a raptor started calling. The Common Black Hawk was soaring around and then perched up in a tree for us for over 10 minutes while we watched in the scope. A true highlight bird of the trip! We then continued up the mountain, where we encountered an amazing mixed flock with multiple Red-faced Warblers, Hermit Warbler, Townsend’s Warbler, and Mountain Chickadee. We couldn’t help but celebrate a little during a late lunch before making the few hours’ drive back to Phoenix for the final night of the trip. 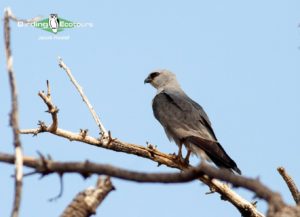 On the final morning of the trip we decided to head back to Baseline Road in hopes of better views of LeConte’s Thrasher. This morning proved to be much more active, and we quickly found LeConte’s Thrasher as well as multiple Bendire’s Thrashers, Ash-throated Flycatcher, and a pair of Black-tailed Gnatcatchers. A great morning to finish a great tour! We then transferred to the airport and said our goodbyes and until next time. 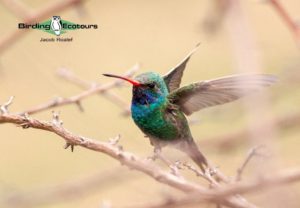 The colors on this Broad-billed Hummingbird really shimmer in the light. 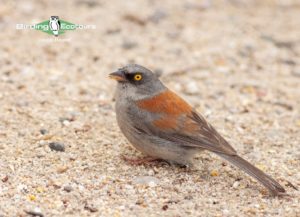 We were treated to great views of the strange-looking Yellow-eyed Junco.

Please see the downloadable PDF above with the full species lists included.