South Africa’s premier bird conservation organization, BirdLife South Africa, is responsible for keeping the country’s bird list updated annually. A hard copy of South Africa’s “official” bird list is published between January and March every year, and a free copy is included in African Birdlife magazine. This and an excel version (which can be sorted by field guide page number, which roughly also gives taxonomic order, alphabetical order, etc.) can also be downloaded (for free) from BirdLife South Africa 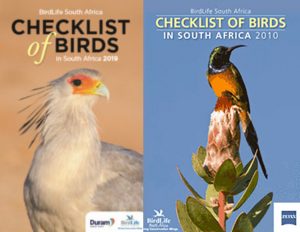 The cover of our most recently published hard-copy checklist from 2019 and from 2010 (our first year).

This is not just a simple list of South Africa’s birds. It also has a wealth of additional information, such as annually updated red data status (globally and locally), precise endemism status (in the past the term “South African endemic” was quite loosely bandied about, even to include “near-endemics” and “Lesotho/Swaziland/South Africa endemics” (kindly check link The endemic birds of South Africa for more details about South African avian endemics and discussion about precise definitions).

It takes literally days of work by the South African bird list committee each year to update the list so that a new version can be posted annually. Not only are any new country records added (such as Barred Long-tailed Cuckoo, which was added to the 2014 list for the first time), but taxonomic changes (splits and lumps) usually have to be made annually. Also common-name changes proposed by world bird lists such as the one at worldbirdnames.org  have to be considered by our own committee. The South African bird list committee does not simply follow every common-name change proposed, as a large proportion of the South African birding community does not want to see local names such as “korhaan” and “tit-babbler” lost, and neither do they want to see perpetual changes to our birds’ names. So there is a process that is followed when a common name change is proposed by international bodies – first, the proposal is discussed publicly to try to get input from as many local birders as possible, and second, the BirdLife South Africa list committee then votes on whether to keep the old name or change to the new name. Sometimes new names are necessary because of splits or for other reasons. But we err on the side of keeping our bird names stable.

The beauty of the BirdLife South Africa country bird list is that it allows us to quickly generate other authoritative and accurate lists as well, such as a list of South African endemics (various categories, such as true endemic, near-endemic, breeding endemic, etc.) and threatened Birds of South Africa (with global and regional Red Data status clearly shown). These “subset” lists can be seen and downloaded at The endemic birds of South Africa and also here. They can be very useful resources for conservation as well, as deciding on what birding tour to potentially join (especially if your focus is on regionally endemic and globally endangered birds).

An Afrikaans version of the list is also published, and if we manage to secure resources and expertise we’d love to publish lists in the other nine official languages too! The 2020 Afrikaans list should be posted later in January, or in February, on the BirdLife South Africa website.