A brief sampling of Peru

In May 2017 Andy Walker conducted a scouting trip to Peru to meet up with Birding Ecotours colleague and resident Peruvian tour leader and expert guide, Eduardo Ormaeche, to have a look at some of the areas Eduardo takes clients to during some of our Peru bird tours.

During his brief visit with friend Erich Lehner, Andy visited several distinct areas including the coast, the Andes, and the Amazon rainforest, and they even found a national mega rarity! Here’s a summary of some of the highlight birds Andy recorded from each distinct area visited, and some he managed to photograph (before he dropped his camera in the river!):

The first area visited was the coast near the capital city Lima, a city very much in the dry and sandy desert, but it was water and coastal birds that generally made up the order of the day. Reed-fringed pools hosted highly sought and spectacular Many-colored Rush Tyrant and the secretive and subtly-plumaged Wren-like Rushbird, while the waterbodies themselves held gorgeous breeding male Cinnamon Teal and White-cheeked Pintail, Giant and Pied-billed Grebes, Andean Coot, Plumbeous Rail, and a wide-range of herons such as Least Bittern and Black-crowned and Yellow-crowned Night Herons, as well as the ‘standard’ American herons and egrets you’d expect (Snowy Egret, Great Egret, etc.). Blackish Oystercatchers with their huge bills and their American Oystercatcher cousins were also evident, with Killdeer, Willet, and Ruddy Turnstone also recorded.

Moving out beyond the pools to the coast proper, the sight of thousands of seabirds was incredible! Scores of cormorants of three species, Red-legged, Neotropic, and Guanay Cormorants, were pouring through, along with hundreds of Peruvian Boobies and massive Peruvian Pelicans. The beaches were covered in terns and gulls, including the one we really wanted to see – the simply spectacular Inca Tern present in huge numbers and showing rather well, with a fine supporting cast that included Black Skimmer and Grey, Grey-headed, Franklin’s, Belcher’s, and Kelp Gulls. Take a look at some videos of an Inca Tern on our Facebook page here.

A short boat ride into a harbor gave us some spectacular close-up views of many of the aforementioned species but with the added bonus of Humboldt Penguin too. Watching them porpoising through the sea and then hauling themselves out onto the sheer cliffs was an early trip highlight on a day of many. 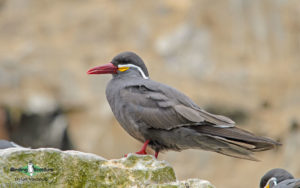 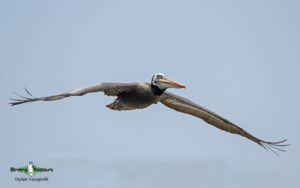 Usually Eduardo would take a few days to explore the higher elevation birding spots that are accessible from Lima;  they are stacked full of exciting birds after all. However, due to our limited time and desire for a few key species we decided to do the trip from sealevel to 5500 m as a long day trip.

As we drove higher and higher into the mountains we started to pick off some of the birds we’d hoped for, Giant Hummingbird, which, as its name suggests, is rather large (it actually looks like a swift!), and then the other side of the size spectrum, the humongous Andean Condor, one of the must-see birds on the planet. However, it was one of the other must-see species we were really looking for, and with Eduardo’s excellent local knowledge and experience we were soon watching the one-of-a-kind Diademed Sandpiper-plover! In fact, we actually found a pair of birds with two young ones – a really great sighting of one of the ‘most-wanted’ birds in the world for many people (and it’s easy to see why). Check out the video on our YouTube page here.

A drive to a higher area resulted in finding the rare and very localized endemic White-bellied Cinclodes, with us getting incredible close-range views as a pair of birds actually flew in towards us to check us out! Over the course of the day we saw at least ten of these Critically Endangered birds.

Although we only had the one day in this beautiful mountain landscape it was a fantastic introduction into the beautiful Peruvian Andes with a staggering haul of some of South America’s finest birds. 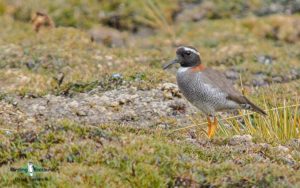 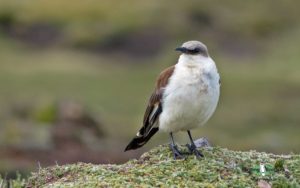 The final leg of our Peruvian adventure took us to the rainforest near Puerto Maldonardo in Southern Peru, reached after a short flight from Lima. On flying in to the airstrip the view was staggering and beautiful, forest and rivers for as far as the eye could see. We had two bases while there, one in a mix of agricultural and secondary forest growth along the river (Rio Madre del Dios) and the other further along the same river (5 hours by boat) and in some seriously impressive rainforest (a mix of secondary and primary growth).

One of the features of the Amazon is the plethora of ‘Ant-things’ to be found. I won’t list all the species we saw here (because there were so many), but there were enough antbirds, antshrikes, antwrens, antthrushes, ant tanagers, and bare-eyes in evidence to keep us occupied for a lifetime, and we took time working through them all. One of my favorites was the White-plumed Antbird, a really stunning bird.

Parrots were also numerous, and as you’d expect for bright, large, colorful birds, they were often rather conspicuous, though not massively so at times for certain species. A visit to a clay lick early one morning was a special moment with Red-bellied, Blue-headed, Blue-and-yellow, and Chestnut-fronted Macaws, along with Dusky-headed Parakeet, Southern Mealy Amazon, Blue-headed Parrot, Cobalt-winged Parakeet, and Orange-cheeked Parrot all seen well.

It was while being in this area of the country that as we were birding along a road chasing after skulking seedeaters we came across a bird none of us were expecting. This bird, an all-black colored flycatcher, at least on initial inspection, was sitting looking straight at us. We were all a little confused by the bird initially, and when it flew it showed white in the wings, and the bird was transformed suddenly into one of the black tyrant flycatchers. There was just one problem: we were not in range of any of the black tyrant flycatchers that occur in Peru! After some hasty research and some searching for the bird to get some photos and videos to prove our claimed mega national rarity, it was apparent we were looking at a male Hudson’s Black Tyrant, a species so rare in Peru this may have constituted about the 3rd record for the country, and the first record of a male! (Note: since returning from the Peruvian rainforest we have submitted a rarity record form and are awaiting formal acceptance from the Peruvian rare bird committee). 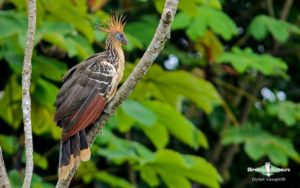 Hoatzin – One of the really special birds we saw.

This was my first trip to Peru, and after spending time earlier in the year birding in Costa Rica and Colombia it was nice to see some more of the Neotropical avifauna. Finding a really rare bird for Peru was the icing on the cake, a wonderful, exciting cake made up of Humboldt Penguin, Inca Tern, Diademed Sandpiper-plover, Giant Hummingbird, Andean Condor, Hoatzin, Pale-winged Trumpeter, Horned Screamer, and so many more.

But Peru was so much more than just the birds. It was great to meet and go birding with Eduardo, take in some Peruvian culture and very nice food and drink, view and walk in some amazing coastal, mountainous, and rainforest environments, and see some other cool wildlife, particularly the several species of monkey we found.

This short trip has really whetted my appetite for visiting Peru again and I am already planning my next trip!