The Australasian biogeographical realm is coincidental, but not synonymous (by some definitions), with the geographical region of Australasia, of which there are also several definitions. The Australasian realm includes Australia, the island of New Guinea (including Papua New Guinea and the Indonesian province of Papua), and the eastern part of the Indonesian archipelago, including the islands of Sulawesi, the Moluccan islands (e.g. Halmahera) and the Lesser Sunda islands of Lombok, Sumbawa, Sumba, Komodo Flores, and Timor – all also part of the Wallacea transition zone. The region also includes several Pacific island groups, including the Bismarck Archipelago, Vanuatu, the Solomon Islands, New Caledonia, and New Zealand and its surrounding islands. The Oceanian realm includes the islands of the Pacific Ocean in Micronesia, the Fijian Islands, the Hawaiian Islands, and Polynesia, including Samoa, with the exception of New Zealand, considered part of Australasia.

The Australasian realm has a common geologic and evolutionary history with a long period of biological isolation. The westernmost boundary is defined by the Wallace Line. Australia, New Zealand, and New Caledonia are all fragments of the ancient Gondwana supercontinent, all separated from other continents, and one another, for tens of millions of years. Australia, New Guinea, and Tasmania are separated from each other by shallow continental shelves and were linked together when the sea level was lower during past ice ages. At least eight different ecoregions occur in the Australasian realm, ranging from tropical and subtropical moist broadleaf forests, to temperate broadleaf and mixed forests, to desert and xeric shrublands. Oceania is geologically the youngest realm and is composed mostly of volcanic high islands and coral atolls that arose from the sea in geologically recent times. Three ecoregions occur in Oceania, tropical and subtropical moist broadleaf forests, tropical and subtropical grasslands, savannas, and shrublands, and tropical and subtropical dry broadleaf forests.

Following International Ornithological Congress (IOC) taxonomy, v10.2 (December 2020), the bird list of Oceania (including Australasia and Antarctic and Pacific Islands) stands at an impressive 2,203 species, 294 of these are globally threatened and over 70 species have become extinct relatively recently (mainly from Polynesia). Numerous endemic families occur in the region, including the monotypic families (all found on our tours outlined below) of Magpie Goose, Plains-wanderer, Kagu, Stitchbird, Mottled Berryhunter, Hylocitrea, Wattled Ploughbill, Crested Shriketit, and Blue-capped Ifrit.

We have an extensive range of exciting tours covering the breadth of this huge region, which is an endemic bird hotspot, these are outlined below with links provided to more specific details such as the detailed tour itinerary, trip reports, client testimonials, and photo/video galleries. These tours make an ideal bird holiday:

We are really proud of our Australia bird tours, they offer a well thought out approach to birding the vast country in a way that will give you the most value for your time and money and importantly, will connect with the best birds and animals possible. Eastern Australia is a great starting point, a list of 400 species on the tour is likely, including greats like Southern Cassowary, Plains-wanderer, Malleefowl, Shy Albatross, Mallee Emu-wren, Golden Bowerbird, Regent Bowerbird, Splendid Fairywren, Superb Lyrebird, Paradise Riflebird, and many more, along with Red Kangaroo, Koala, Platypus, and Short-beaked Echidna. The Northern Territory – Top End tour offers Gouldian Finch, Hooded Parrot, Rainbow Pitta, Magpie Goose, Beach Stone-curlew, and Chestnut-quilled Rock Pigeon, along with amazing ancient rock art, reminding us of the human presence on this land dating back thousands of years. Western Australia has been cut off from the rest of the world for a long time and so has developed many regional endemics — the focus of this tour. They include some tough birds like Noisy Scrubbird, Western Bristlebird, and Black-throated Whipbird (we have a great track record on views of these). Plenty more endemics await here like (Western) Crested Shriketit. If desert birding is your thing, our Northern Territory – Alice Springs and Uluru tour is for you. Spinifex Pigeon, Gibberbird, Australian Pratincole, Bourke’s Parrot, Spinifexbird, and Budgerigar are some of the big draws. A much greener place in Australia is the island state of Tasmania. Here, once more, it is about local endemics including the Critically Endangered (BirdLife International) Orange-bellied Parrot, Swift Parrot, Forty-spotted Pardalote and lots more! You can watch a virtual tour on our Eastern Australia tour page covering this tour and our Tasmania tour.

One of the most stunningly beautiful countries on the planet, our comprehensive New Zealand bird tour will satisfy your endemic bird requirements and let you soak in the amazing views all along the way and includes several pelagic boat trips. This tour goes after all of New Zealand’s kiwis, as well as the Critically Endangered (BirdLife International) New Zealand Storm Petrel, along with Stitchbird, Blue Duck, Kea, New Zealand Kaka, Wrybill, Black Stilt, and more albatrosses and other exciting seabirds than you can imagine. This is a once-in-a-lifetime endemic-filled trip, not to be missed.

Our birding tour to New Caledonia, Fiji, and Samoa island-hops to some fascinating and beautiful places and targets some very special birds like Kagu, New Caledonian Crow, Crow Honeyeater, Cloven-feathered Dove, Orange Fruit Dove, Golden Fruit Dove, Whistling Fruit Dove, Crimson Shining Parrot, Flat-billed Kingfisher, Samoan Whistler, and Mao to name a few. This region is not often visited but the birds here are some of the best-looking and most highly sought-after in the world. There are a large number of endemic species and subspecies (likely to be elevated to full species status in the near future) available on this tour.

We also have a shorter tour just focusing on the island of New Caledonia, targeting the island’s endemics and specials. The main target is Kagu, along with Crow Honeyeater, New Caledonian Crow, New Caledonian Thicketbird, Goliath Imperial Pigeon, and New Caledonian Whistler. This is a great tour to add on to one of our other tours in the region, such as those in Australia or New Zealand.

Part of Asia politically, but biogeographically part of Australasia, the following three tours across Wallacea and New Guinea offer up some fantastic endemic birds. Sulawesi and Halmahera form the western boundary of Australasia and our tour to these two islands are packed full of endemic birds. (Wallace’s) Standardwing and (Halmahera) Paradise-crow are two endemic birds-of-paradise from Halmahera, while Sulawesi provides the exciting-sounding quartet of Hylocitrea, Malia, Geomalia, and Maleo. Other tour highlights include Ivory-breasted Pitta, Sulawesi Pitta, North Moluccan Pitta, Green-backed Kingfisher, Scaly-breasted Kingfisher, Purple-bearded Bee-eater, Knobbed Hornbill, Moluccan Owlet-nightjar, and many more.

Our Lesser Sunda Islands birdwatching tour in southern Wallacea takes in six islands and focusses on finding the endemics of these remote places. Highlights are many but include Sumba Hornbill, Sumba Buttonquail, Timor Friarbird, Alor Myzomela, Flores Hawk-Eagle, Glittering Kingfisher, and Elegant Pitta to list a small sample. Komodo Dragon is likely to be the non-avian highlight on this exciting tour.

For our other Indonesian tours, those occurring outside the Australasian biogeographic realm, please see here. 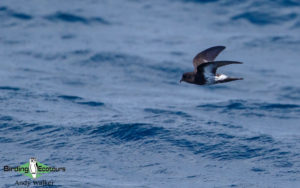 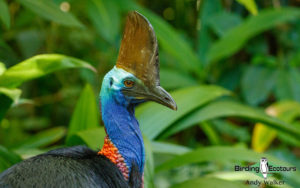 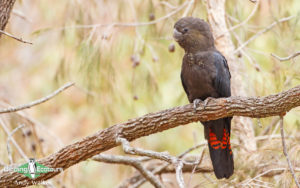 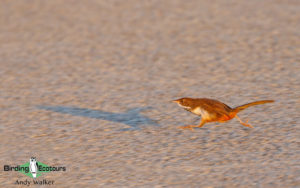 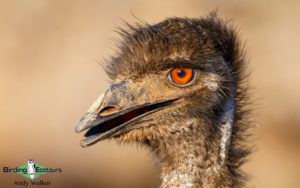 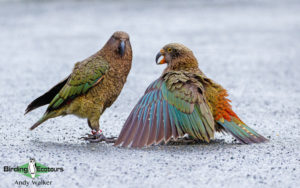 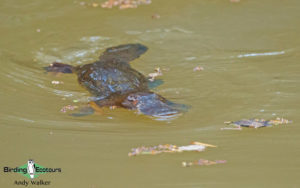 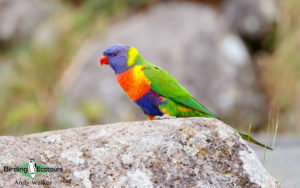 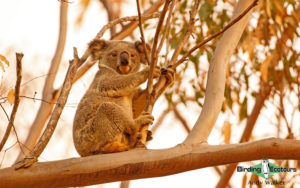 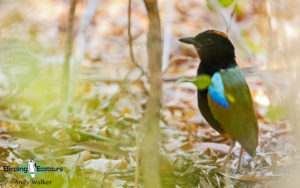 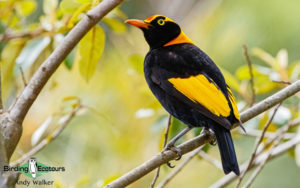 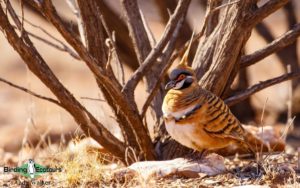 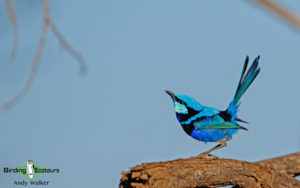 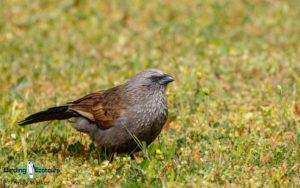 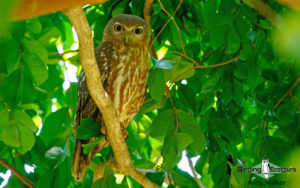 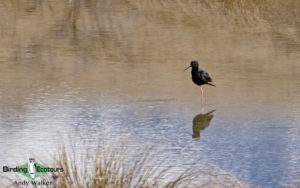 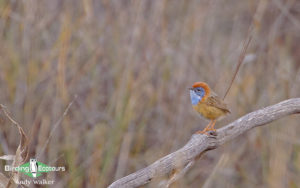 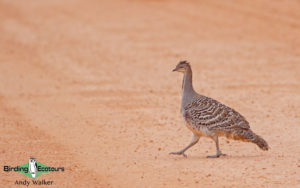 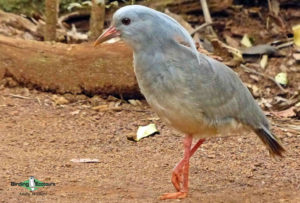 “Andy is a superb guide with a wonderful knowledge of birds and where to find them. He is enthusiastic and keen, great company and a real pleasure to bird with. Our Australian trip was very successful in terms of sightings and also really enjoyable. Andy played a big part in that with his superb organisation, excellent birding skills, easy-going nature and positive attitude. I would happily join Andy on a birding trip again and hope to be able to do so later this year!Not sure how you would pick a favourite place from that. Each region is different and of course getting to see different parts of the country is something that I would have thought one would want to do if doing OZ. I would have loved to have seen more butterflies, mammals and reptiles than we did, but maybe that requires different locations and more time in the field. We did however get Platypus and Echidna. Butterflies are pretty much restricted to the north east. Timing for birds is tough as there is so much movement amongst them depending upon food sources, but I would have said we did pretty well. While obviously we wanted to see all we could, it was not the end of the world if we missed anything, and a huge list was not our goal. We were there in the dry season, I would hate to think what it would be like in the wet season, as a number of places/routes would have been under water, especially in the Darwin region.
Accommodations on the whole were very good – I loved the different lodgings, many of which we had to do our own breakfast, with kitchen facilities in the cabins. The country is huge, and with very few people, less than SA!, so some of the locations there was little choices, especially for a large group, but Barry did great in getting what he did.
At each region we had to get a bus, there were 14 of us – these varied between great to OK, as the on the extension we had to have one with a trailer.”