Brazil is the world’s fifth-largest country and proudly holds the title as the most biodiverse country on the planet. It has the most known species of plants (55,000), freshwater fish (3,000), ranks third for the most bird species (1,832), behind Peru and Colombia and ranks second for the most reptile species (744). Most importantly (for the purposes of this blog), it has a remarkable 689 species of mammals, making it the country with the largest number of species of mammals in the world.

For any wildlife lover who has yet to set foot in the neotropics, and has grown up watching wildlife documentaries, the idea of a visit to a neotropical country will conjure up visions of wildlife everywhere, with troops of monkeys jumping through the forest canopy, sloths making their way slowly down trees, Lowland (Brazilian) Tapirs along riverbanks and daily sightings of Jaguars and other iconic creatures. However, the above is not strictly true. Although there is a high diversity of wildlife, mammals are certainly not found in the densities as they occur in Africa, which can make finding mammals very difficult, not only due to the low densities of animals, but also due to the often nocturnal, secretive, and shy nature of many of the species. 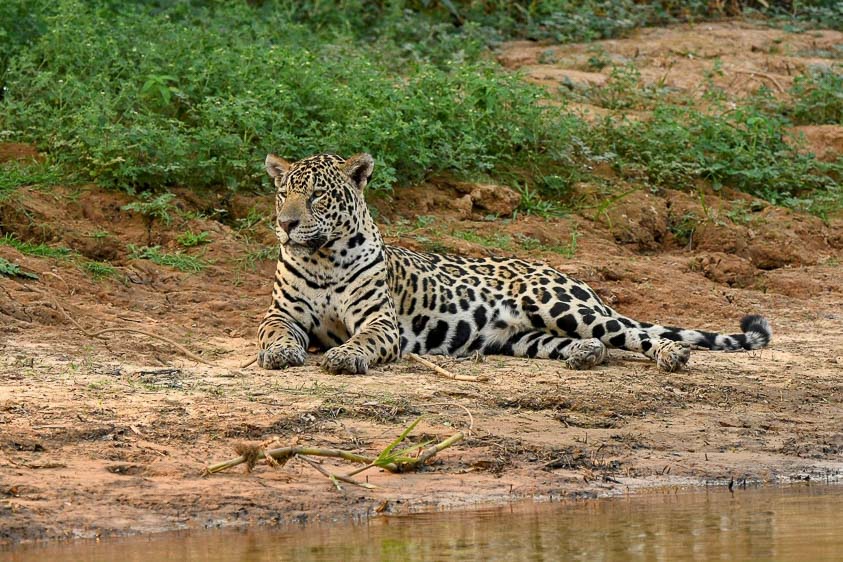 Jaguar can be seen on riverbanks in the Pantanal (photo Ricardo Boschetti). This majestic animal is a major target of our “Best of Brazil birds and mammals tour”.

Nothing can be more disappointing for a wildlife lover than coming to the neotropics for the first time, full of expectations of multiple wildlife encounters, and then spending an entire day walking rainforest trails, and not finding much other than a shy Central American Agouti, a glimpse of an Amazon Red Squirrel or troop of squirrel monkeys. Of course, this is not always the case, and with some luck, enough time looking in the right places, and a quality nature guide, you can be rewarded with sightings of good numbers of White-lipped Peccaries, family groups of Giant (River) Otters, several species of primates and even the mighty Jaguar.

However, where is the top place to go in the neotropics for the best opportunities to see and photograph mammals? The answer is, without hesitation, Brazil! Even though you cannot compare the mammal densities of Brazil with those you will encounter on a safari trip to, for example the Kruger National Park in South Africa, a well-organized Brazil tour should satisfy your neotropical mammal expectations. Travelers will be entertained with beautiful and amazing animal encounters and Mother Nature could even reward you with sightings of seldom-seen species such as Bush Dogs, Giant Armadillos or a melanistic/black morph Jaguar.

The best places for mammal watching in Brazil

The Pantanal, the largest wetland in the world, teeming with aquatic birds and other charismatic wildlife, is certainly the best place to visit in Brazil for mammal watching. The best option to access the Pantanal is along the Transpantaneira Road, which joins the town of Poconé and the Cuiaba River in the northern part of the Pantanal. Along this road you will probably obtain your first encounters with Capybaras, although with a week in the Pantanal you should see hundreds of these massive rodents! (the largest rodent in the world).

Perhaps one of the most wanted species is the spectacular and Endangered (IUCN) Giant (River) Otter. Even though these charismatic creatures can also be seen in the Amazon Rainforest of Peru and Ecuador, the Pantanal certainly offers you the best chance. 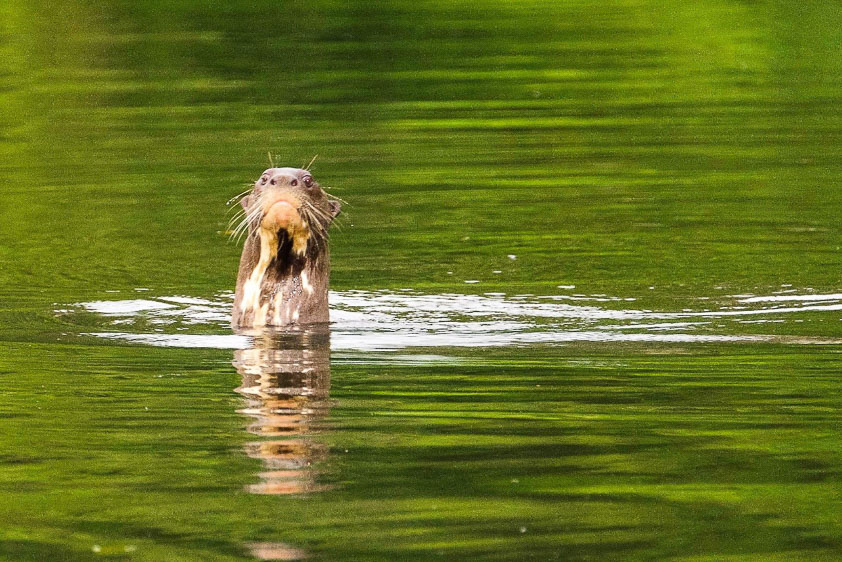 Nocturnal drives along the Transpantaneira, or around the woodlands of some of the Pantanal’s top lodges, can be really productive with the chances of seeing Lowland (Brazilian) Tapir (South America’s largest mammal), Marsh Deer, Crab-eating Raccoon (the only species of raccoon in South America), Crab-eating Fox (often seen near the lodge we usually stay at, although elusive) and Striped Hog-nosed Skunk. Sightings of Ocelot are possible but are not frequent; a pre-dawn walk around Pouso Alegre Lodge may be your best chance for this species. Sometimes we’ve seen good numbers of them in the southern Pantanal though, even during the heat of the day.

Typical primates you are likely to encounter in the Pantanal include Bearded (Azara’s) Capuchin, Black-and-gold Howler Monkey and Black-tailed Marmoset. Some of the Pantanal’s less commonly sighted mammals include Collared Peccary, Brazilian Porcupine, Tayra, Yellow Armadillo, Southern Tamandua, South American Coati, and Neotropical (River) Otter. With luck and patience, you can find the impressive Giant Anteater in the open shrubby savanna between Poconé and the entrance of the Transpantaneira Road. Even though Giant Anteater is more common in the southern Pantanal and the rolling cerrado grasslands of the Serra de Canastra National Park, the northern Pantanal offers good chances around Pousada Piuval Lodge. 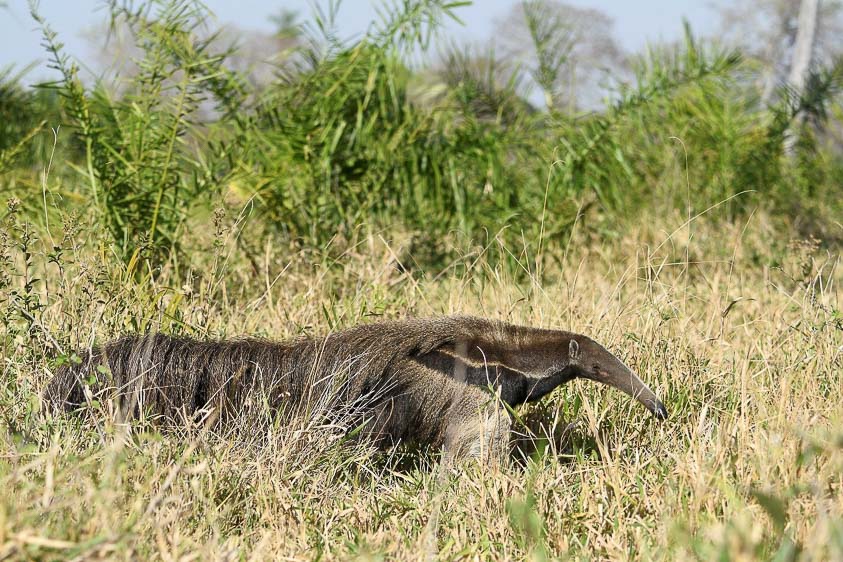 Jaguar must be considered the quintessential animal of the neotropics. Those who have encountered this animal in places such as Manu National Park in Peru or in the Cockscomb Basin Wildlife Sanctuary and Jaguar Reserve in Belize, can consider themselves very lucky, as sightings of this powerful cat outside of the Pantanal are rare indeed!

However, Jaguar in the Pantanal is a different story altogether. Here, perfect Jaguar habitat still exists, resulting in a healthy population inhabiting the gallery riverine forest along the Cuiaba River. The abundance of food in the largest wetland in the world makes the Pantanal one of the last bastions of this splendid creature! Therefore, the Pantanal not only offers you chances of seeing this majestic animal but also to observe its behaviour as it goes from enviable moments of resting on river sandbanks, to witnessing the power and finesse of a hunt, one of the most rewarding moments for wildlife lovers and photographers.

Our “Best of Brazil” birding and mammals holiday is probably the best tour you can join if you want to see Jaguar, as well as all the other amazing mammals and birds of the Pantanal.

The possibilities of encounters with creatures such as Puma, Giant Armadillo, Lesser Grison, Bush Dog and Jaguarundi are very low, and you should consider yourself very fortunate if you find any of these animals in the Pantanal. Bush Dog is particularly rare in the Pantanal and is considered one of the rarest and most elusive canids on earth. A true ghost of the Pantanal and the rainforest!

Another place for some excellent mammal watching experiences in Brazil is the Amazon Rainforest in Mato Grosso state. Time at some of the lodges near Alto Floresta could help increase your chances of Giant (River) Otter, Lowland (Brazilian) Tapir, Red Brocket and White-lipped Peccary. The endemic White-cheeked Spider Monkey and White-nosed Saki (endemic to south-central Brazilian rainforests) are both possible in the forests of Alto Floresta, while the bizarre-looking and most-wanted Bald-headed Uakari monkey is only possible in the Uakari Amazon Rainforest Reserve near Manaus in north-western Brazil.

The vast grasslands and cerrado habitats of Brazil are good for Giant Anteater, Brazilian Guinea Pig (Cavy) and the most-wanted Maned Wolf with its long legs, another exceedingly rare animal and the largest canid in South America. Being mainly crepuscular and nocturnal, it is a difficult animal to observe in the southern Pantanal and Chapada dos Guimarães National Park. However, you stand a considerably better chance of seeing this elusive canid in the Serra de Canastra National Park in the Minas Gerais state, where we also have excellent chances of Giant Anteater (some would say near-guaranteed). 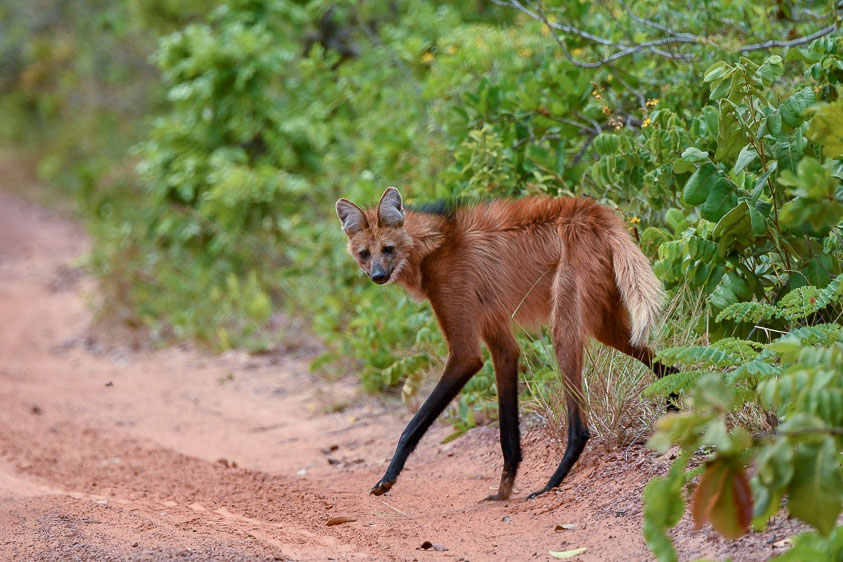 If it is guaranteed sightings of Maned Wolf you are after, then Santuário do Caraça, not far from Bello Horizonte city, is the place to go. The monks of the monastery of Caraça, built in the 18th century, are in charge of this sanctuary and since 1982 have been feeding the local Maned Wolves. They are fed, not for the purpose of taming the animals, but rather to keep them from scavenging in garbage bins and to allow visitors to admire these amazing animals up close! Even though they have become habituated, they remain very suspicious and shy as they are still truly wild animals. It is certainly a unique experience to sit around the monastery atrium and watch Maned Wolves as they climb the steps and collect food right in front of you. With luck, they will remain nearby while eating, allowing you to get good photos and prolonged views, or they might just grab the food and disappear to eat elsewhere.

We have an annual set departure birding and Maned Wolf tour but you can also ask us about private tailor-made mammal/wildlife holidays to Brazil.

Finally, to complete a true ‘mammal mania experience’ you can spend a few days in the Atlantic Forest. Although more famous for its high levels of bird endemism, this forest also offers you the chance to see a number of endemic and unique neotropical primates. These include the Critically Endangered (IUCN) Southern Muriqui. The Southern Muriqui is the largest of the South American primates, with a world population of only 1,100-1,200 mature individuals, distributed in the states of Paraná, Sao Paulo, Rio de Janeiro and Espiritu Santo. This unique primate has the robust build of woolly monkeys, but the elongated limbs of spider monkeys; furthermore, they resemble gibbons due to their acrobatic movements. Another beautiful primate you can find in the Atlantic forest not far from Rio de Janeiro, is the Golden Lion Tamarin, one of the 24 endemic primates of the Atlantic Forest and yet another listed by the IUCN, this time as Endangered. The Golden Lion Tamarin is one of the most endangered native primates of the Atlantic Forest, mostly due to habitat loss. Thankfully, some wildlife sanctuaries still provide a haven for this species by preserving the special native habitat it requires. Although numbers have been increasing steadily in recent years, with an estimated world population of just over 3,000 individuals in the wild and an additional 490 in captivity, this species is not out of the woods just yet.

Our southeast Brazil birding tour allows you to sample the amazing Atlantic Forest and also to see some of its mammalian inhabitants. But we can also arrange a bespoke mammal or wildlife photography tour for you if you prefer. 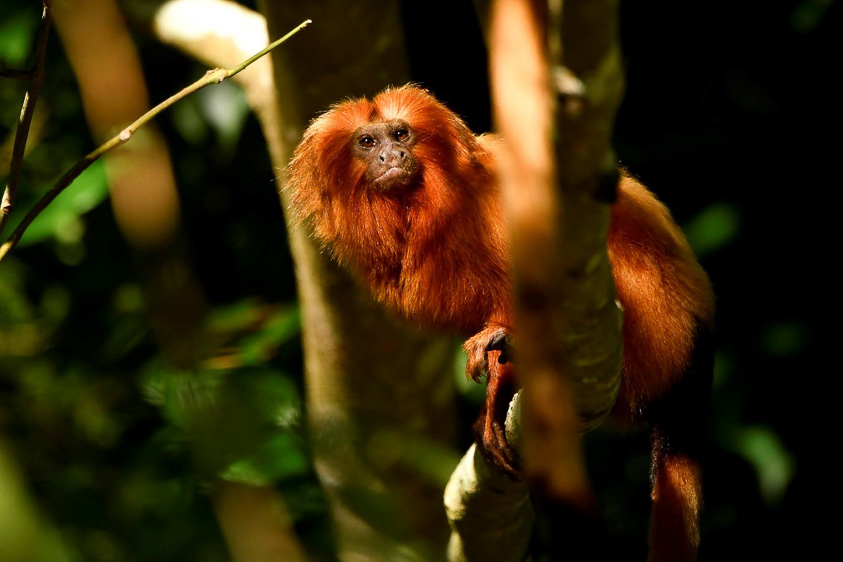 No matter where you go in Brazil you will always have the chance to see interesting and often charismatic wildlife, whether it be on a birding trip or on a special mammal-focussed trip targeting the Big Five of Brazil: Jaguar, Maned Wolf, Lowland (Brazilian) Tapir, Giant Anteater and Giant (River) Otters. Birding Ecotours can easily provide you with many unforgettable wildlife experiences in the most biodiverse country in the world. Please see more information about the birds of Brazil and our annual set departure tours, here or kindly contact us if you want a custom mammals tour of Brazil. 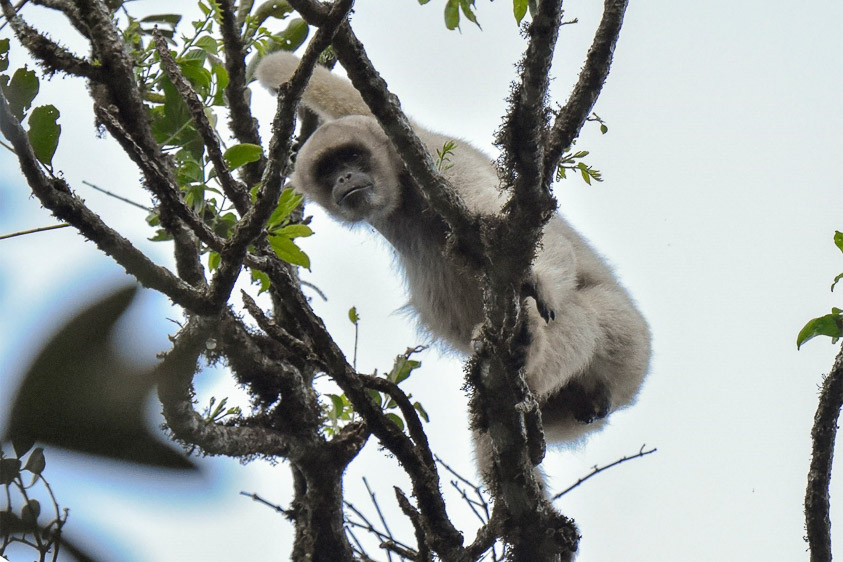 When is the best time to visit Brazil?

The best time to visit Brazil to enjoy its many interesting mammals is anytime between mid-August and early-October, with September being the optimal month. September is the driest time of the year, with river levels at their lowest which means there are many long, exposed stretches of sandbanks which always prove popular for animals to congregate and rest.

Please do not think twice about joining Birding Ecotours on a wildlife adventure to enjoy and photograph many amazing mammals in Brazil. Please do contact us for more details.