TOUR SPECIAL: ONLY 6-8 TOUR PARTICIPANTS — SMALLEST ON THE MARKET!

This trip is fully-booked, we may add an additional departure so let us know if you want to be waitlisted – or please consider booking the 2023 tour

* Please note that these currency conversions are calculated in real-time, therefore are subject to slight change. Please refer back to the base prices when making final payments.

Hawaii – commonly referred to as the ‘Aloha State’ with its welcoming atmosphere, is a tropical paradise that is about as unique as they come. Once an independent nation, years ago, Hawaii is now an officially recognized US state, making up one of the 50 US states. Hawaii is comprised of a string of islands known as the Hawaiian Archipelago, located far out in the Pacific Ocean, isolated from the rest of the world. There are eight primary islands that feature in the archipelago, namely – Niʻihau, Kauaʻi, Oʻahu, Molokaʻi, Lānaʻi, Kahoʻolawe, Maui, and Hawaiʻi (Big Island).

The peculiar-looking Iiwi is one of the many Hawaiian endemics, and a highly sought-after species (photo Mandy Talpas).

Hawaii is well known as a prime vacation and wedding destination, and has a great many highlights featuring some of the best surfing in the world and the largest naval command in the world. Hawaii’s biodiversity and in particular its avifauna is somewhat less well-known, and historically hasn’t accounted for much of the tourism boon to the region – but this is steadily changing.

Due to its isolation from the rest of the world, Hawaii has a very high rate of endemism and features a number of strange and peculiar-looking birds, found nowhere else. It is extremely unfortunate that indeed a great number of various Asian and European species were introduced to these islands, as these, together with other introduced taxa, and the spread of mosquitos and malaria, have all h had a devasting impact on the local biodiversity, and especially its birdlife. A large number of species have become extinct, with many more species now rare and thinly distributed, and on the precipice of extinction.

The official recognition of Hawaii and its birds, as countable for the official ABA checklist, has encouraged a great deal of American based birders to venture to these islands, in search of the many unique species found here. Although the region has drawn in ‘world-birders’ seeking to add these endemic species to their world lists, this inclusion has had a widespread positive impact on raising awareness to the plight of Hawaii’s threatened birds. It is thus with a great deal of pride that we have added a birding tour to Hawaii, as we strive to continue help raising awareness of the plight of Hawaii’s endemic birds, and indeed help various conservation bodies throughout the state of Hawaii.

Our birding tour takes in the three main and easily accessible islands, O’ahu, Kauaʻi and Hawaiʻi (the latter more commonly known as Big Island). Here we focus our efforts on getting to the different sections of higher-altitudinal montane forest, in search of the various endemics and specials that still persist, while also ensuring we try and find as many of the various introduced species as possible. Some of the island’s most sought-after endemics include such species as Iiwi, Akiapolaau, Palila, Apapane, Akekee and Anianiau, through to more widely known species such as Nene (Hawaiian Goose) – which is also the official state bird of Hawaii. Other desirable species such as Bristle-thighed Curlew, Hawaiian Petrel, White Tern, and Laysan Albatross also form core targets on our tour.

Hawaii’s blend of highly localized birds, jaw-dropping coastal vistas and the feeling of being in a tropical island paradise – all the while adding species to both your world and ABA lists, make Hawaii a destination not to be missed!

Today is your arrival day, and you can arrive at your leisure. Upon arrival in Honolulu (HNL) you will be transferred to our comfortable lodge, where we will spend the next three nights. Should there be time available in the afternoon, we may do some local birding nearby, getting familiar with some of the more regularly occurring species (see under Day 2 below for more details). We will gather in the lobby at 6pm for our welcome dinner.

Our first morning will be spent birding around the Kapiʻolani Regional Park. One of the star species here is White Tern, while Pacific Golden Plover is another sought-after species at this site. A wide array of introduced species can also be sought and include the likes of Rose-ringed Parakeet, Zebra and Spotted Doves, Java Sparrow, Common Waxbill, Red-crested Cardinal and Yellow-fronted Canary. The rest of the day is spent outside of Wakiki in the forests of the Koʻolau Range where we will be primarily searching for the endemic Oahu Amakihi and the Oahu Elepaio. Both of these species are red-listed as per the IUCN Red List (being Vulnerable and Endangered, respectively). Indeed, rather tragically, many of the other endemic species occurring throughout the Hawaiian Islands are also red-listed and many of them Critically Endangered. Further introduced species, such as White-rumped Shama, Warbling White-eye and Red-billed Leiothrix can be seen in this area as well.

Our day will be spent birding and exploring the coastal region along the north shore of the island. Although perhaps more well-known for its picturesque beaches with world-class surfing, the secluded coves and tracts of shoreline, along with the vast family farms (with crops of coffee, coao and many others) are home to the highly sought-after Bristle-thighed Curlew, along with a wide range of other targets such as Wandering Tattler, an endemic subspecies of Black-necked Stilt and the endemic Hawaiian Coot. Further introduced species such as Saffron Finch and Chestnut Munia can also be found in the area.

Bristle-thighed Curlew can be seen on O’ahu (photo Mandy Talpas).

We have the morning at our leisure as we have a mid-morning flight to Lihue on Kaua’i. Following our arrival, we will begin exploring Kaua’i’s beautiful north shore. We will focus our efforts around the rugged cliffs of the coastal Kīlauea Point National Wildlife Refuge and the freshwater-dominated Hanalei National Wildlife Refuge. One of our main targets at Kīlauea Point is the stunning Laysan Albatross – small numbers of which breed here. Other species we’ll be searching for are Red-footed and Brown Boobies, stunning Red-tailed and White-tailed Tropicbirds and Great Frigatebird (a similar, yet different species to the Magnificent Frigatebird occurring on mainland USA). Nene (also known as Hawaiian Goose), which is the state bird of Hawaii, usually provide us with great views throughout the day as well. Hawaiian Duck will be one of our main targets at the Hanalei National Wildlife Refuge.

We will dedicate the day to birding and exploring the glorious Kōkeʻe State Park. This lush mountainous park offers the best endemic birding on the island, and we will spend our time birding the rainforests for a wide assortment of difficult-to-pronounce specials such as Kauai Amakihi, Apapane, Anianiau, Kauai Elepaio and even the rare and IUCN Critically Endangered Akekee. This area also plays host to further introduced (yet countable) species such as Red Junglefowl, the difficult-to-see Japanese Bush Warbler, and Chinese Hwamei. Aside from this exciting endemic birding, we are also assured to enjoy incredible vistas of the Waimea Canyon, known as the ‘Grand Canyon of the Pacific’.

We have a full morning available to us to continue birding and exploring Kaua’i. We will search for Greater Necklaced Laughingthrush today in particular, although we will need some luck to see this species, along with any of the island’s specials we may have missed, listed under Days 4 and 5 above. We will undertake an afternoon flight to Kona, on Big Island (also known as Hawai’i) from where we will settle in for the afternoon, and spend the next four nights.

One of the most important birding sites for endemic Hawaiian species, throughout all of the Hawaiian Islands, is the Hakalau Forest National Wildlife Refuge. Dominated by montane cloud forest, with a strong suite of native plants and general wildlife still largely persisting, we will spend the entire day birding this wonderful protected and highly restricted area. Some of our target species here include the likes of Hawaiian Hawk, Omao, Hawaii Creeper, Hawaii Akepa, Akiapolaau, Iiwi, Hawaii Amakihi and Apapane. Whilst exploring the area for these species, and others, the ancient ohia trees that dominate the area will take you to a time period long past, allowing us to better understand the plight of Hawaii’s endemic species.

We have a full day set aside to explore other important birding areas on the island – ranging from the high elevations of Pu’u La’au on the slopes of the dormant volcano, Mauna Kea, along the Saddle Road, to the more coastal Waikōloa area. Two important endemic species that we will focus our efforts on today are the Hawaii Elepaio and the Critically Endangered (IUCN) Palila. Various other new species we are unlikely to have seen yet might include Short-eared Owl, Wild Turkey, California Quail, Erckel’s Spurfowl, Black and Grey Francolins, Chukar Partridge, Chestnut-bellied Sandgrouse, Eurasian Skylark and African Silverbill.

Today we will undertake a pelagic trip out of Honokohau Harbor. Together with our trusty captain and boat, we will spend most of the day out in the deep. In between the more regularly occurring species, we’ll keep a keen eye open for the likes of a wide range of exciting and fast-flying gadfly Pterodroma petrels, namely Hawaiian, Juan Fernandez, Mottled, White-necked and Black-winged Petrels, Christmas and the Critically Endangered (IUCN) Newell’s Shearwaters, Leach’s and Band-rumped Storm Petrels, Masked Booby, South Polar Skua and more. Indeed, the truly exciting aspect about pelagic birding is that you can never truly predict what you’ll see out there! More regularly occurring species typically seen include Wedge-tailed and Sooty Shearwaters, Bulwer’s Petrel, Great Frigatebird, the stunning White-tailed Tropicbird, Brown Booby, Sooty Tern and both Black and Brown Noddies. Occasional cetacean sightings also feature on these trips.

Following an excellent day out on the water, we will enjoy our final dinner together, and reminisce about the many exciting birds we would have seen.

We’ll be on the lookout for Hawaiian Petrel on our pelagic day trip (photo Mandy Talpas).

The tour comes to an end today, and you can depart home from Kona Airport. 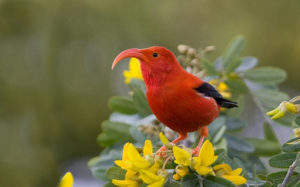 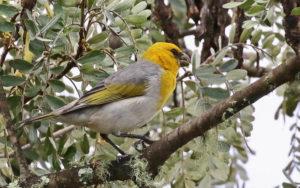 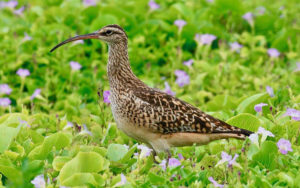 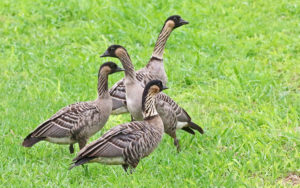 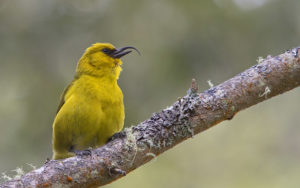 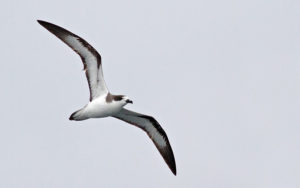 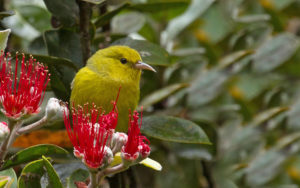 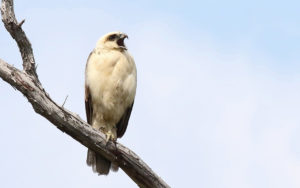 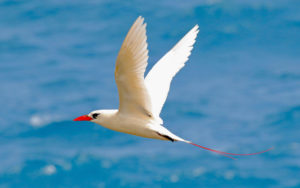 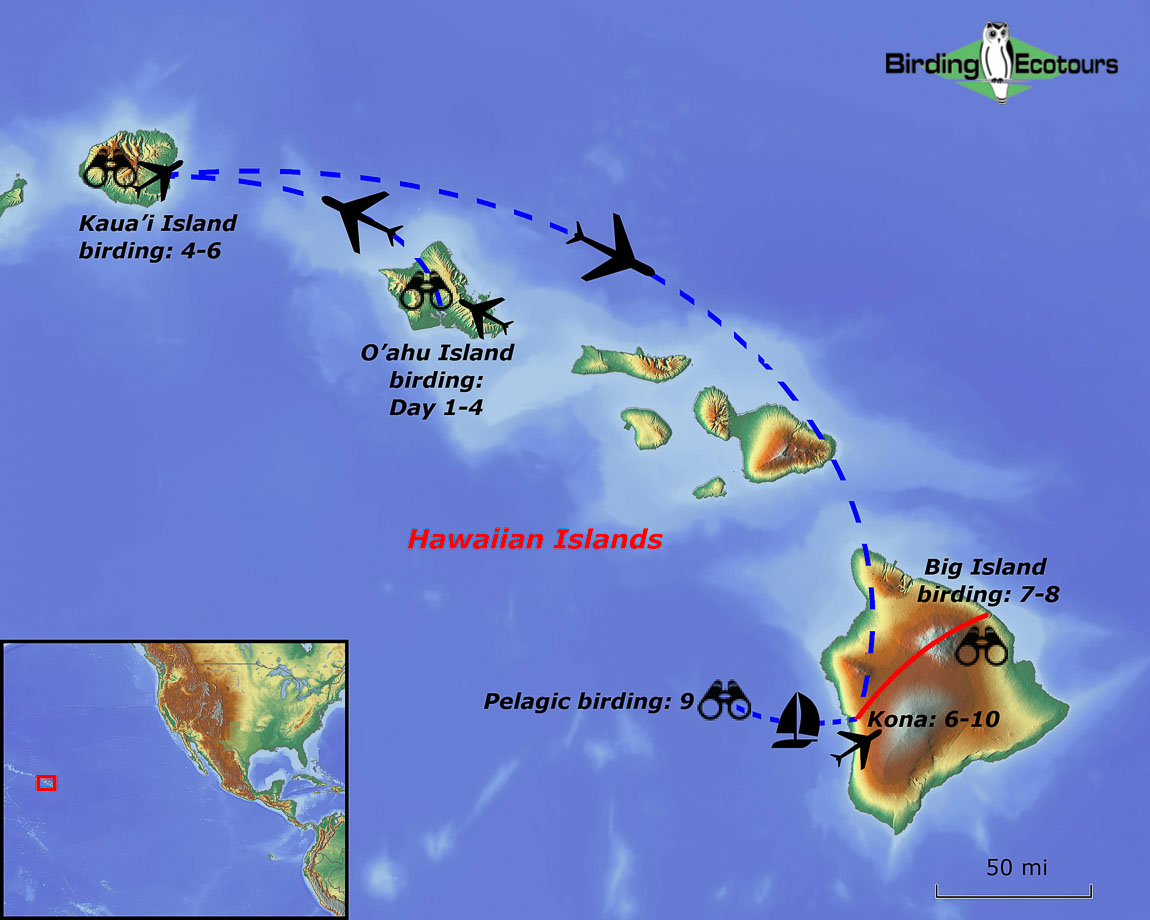