We encourage a group of at least 8 people to book this tour as the logistics are pricey for smaller groups – please ask us for prices if you have a group wishing to do this tour.

Our “Remote North” Madagascar tour is good for serious listers who may have already done the basics of Madagascar: the standard Madagascar trips that most birding companies do allow one to see perhaps 80 percent of the endemics given almost a month (including extensions), but visits to more remote sites is needed to “get” the others. The main such site is visited on this trip, allowing birders to connect with some of the rarest, most range-restricted, and endangered species on the planet. These include Madagascan Pochard, Madagascan Serpent Eagle, Slender-billed Flufftail, and Red Owl. Not only is the birding spectacular, but so too is the scenery and the variety in the fauna and flora that one picks up along the way. The trip, however, is quite strenuous and the camping fairly basic. But the birds available soon make one forget about the lack of common luxuries. But it is better to join our standard tours if you want proper accommodation and want to see a great deal of what Madagascar has to offer – this trip is for those who want to get closer to “cleaning up”. 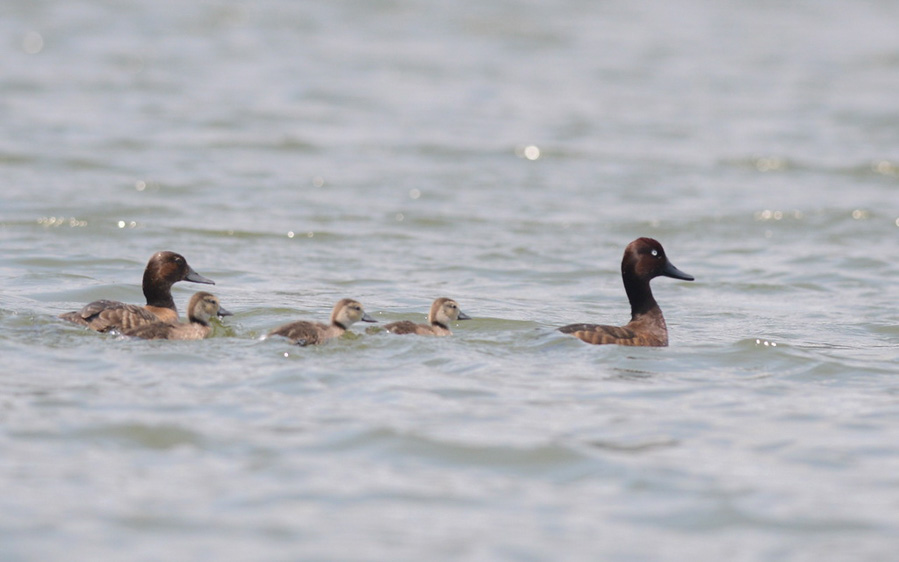 Madagascan Pochard is one of our targets on this trip.

We also offer trips to other remote sites within the massive island of Madagascar to search for Tsingy Wood Rail (at Bekopaka) and for Sakalava Rail (at Lake Kinkony). Please contact us for details.

This tour can be combined with our Birding Tour Comoros and Mayotte.

You will arrive at Ivato International Airport, serving Antananarivo (usually abbreviated to Tana), the capital of Madagascar, and transferred to your hotel close to the airport. We might already see some common birds such as Red Fody and Madagascan Wagtail.

Today we will fly to the town of Mahajanga (Majunga) in the northwest of Madagascar on the Betsiboka Delta.

If time allows before our flight departs, we will make an early visit to Lake Tsarasoatra. This small lake near Tana is a Ramsar Site and plays a pivotal role for 14 threatened waterbird species and subspecies that are endemic to Madagascar. Here we hope to get acquainted (or more likely re-acquainted, since many of the folks joining this remote Madagascar trip will already have visited Madagascar before and are now only seeking “off the beaten track” species) with many of Madagascar’s more common birds, along with Malagasy Pond Heron, which we usually find in very small numbers amid the heronry consisting mainly, though, of Squacco Heron.

After arrival in Mahajanga a stroll along the beach adjacent to our hotel might yield a number of shorebirds.

Today’s drive to Bealanana will take the full day. En route, however, we will briefly pass through Ankarafantsika National Park, where we might encounter Broad-billed Roller, White-headed Vanga, Madagascan Hoopoe, Crested Drongo, ad arguably the most unique of the vangas, Sickle-billed Vanga. We plan to stop at Antsohihy for lunch and will arrive at Bealanana in the evening. 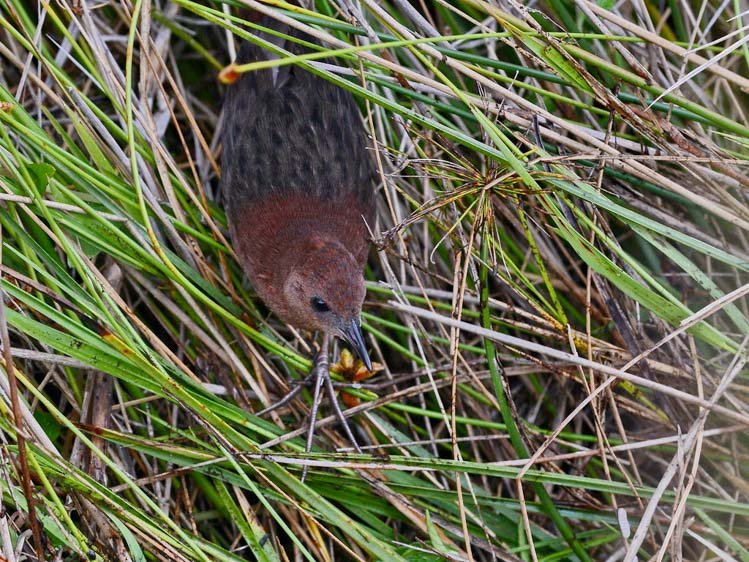 The rare and elusive Slender-billed Flufftail.

We will leave after breakfast, driving toward the east coast, and should arrive in Bemanevika in the late morning. En route we will be aware of roadside birds like Olive Bee-eater, Malagasy Kestrel, Madagascan Cisticola, and perhaps the occasional Madagascan Buzzard.

Bemanevika is one of three protected areas in Madagascar’s Protected Areas System (SAPM – Système des Aires Protégées de Madagascar), comprising a unique mosaic of wetlands, marshlands, grasslands, and rainforest fragments and being home to two of Madagascar’s most threatened endemics, Madagascan Pochard, the world’s rarest duck, formerly thought to be extinct in the wild, only rediscovered in 2006, and now classified as Critically Endangered (IUCN), and the Endangered (IUCN) Madagascan Serpent Eagle, as well as a good number of other threatened and endemic species.

On our arrival, an eager camp staff will welcome us to the pristine environment that they and the Peregrine Fund maintain and conduct research in, which will be our base for the next three nights.

After setting up camp we will start exploring the different habitats of this exciting place and will be looking for White-throated Rail, Madagascan Lark, and other species. On one of the small lakes we’ll scan for Meller’s Duck and Malagasy Kingfisher, and in the forested area we set out to seek one of the main targets of this trip, Red Owl, by far the most uncommon of the owls the island has to offer, and one which very few world birders have laid eyes upon. 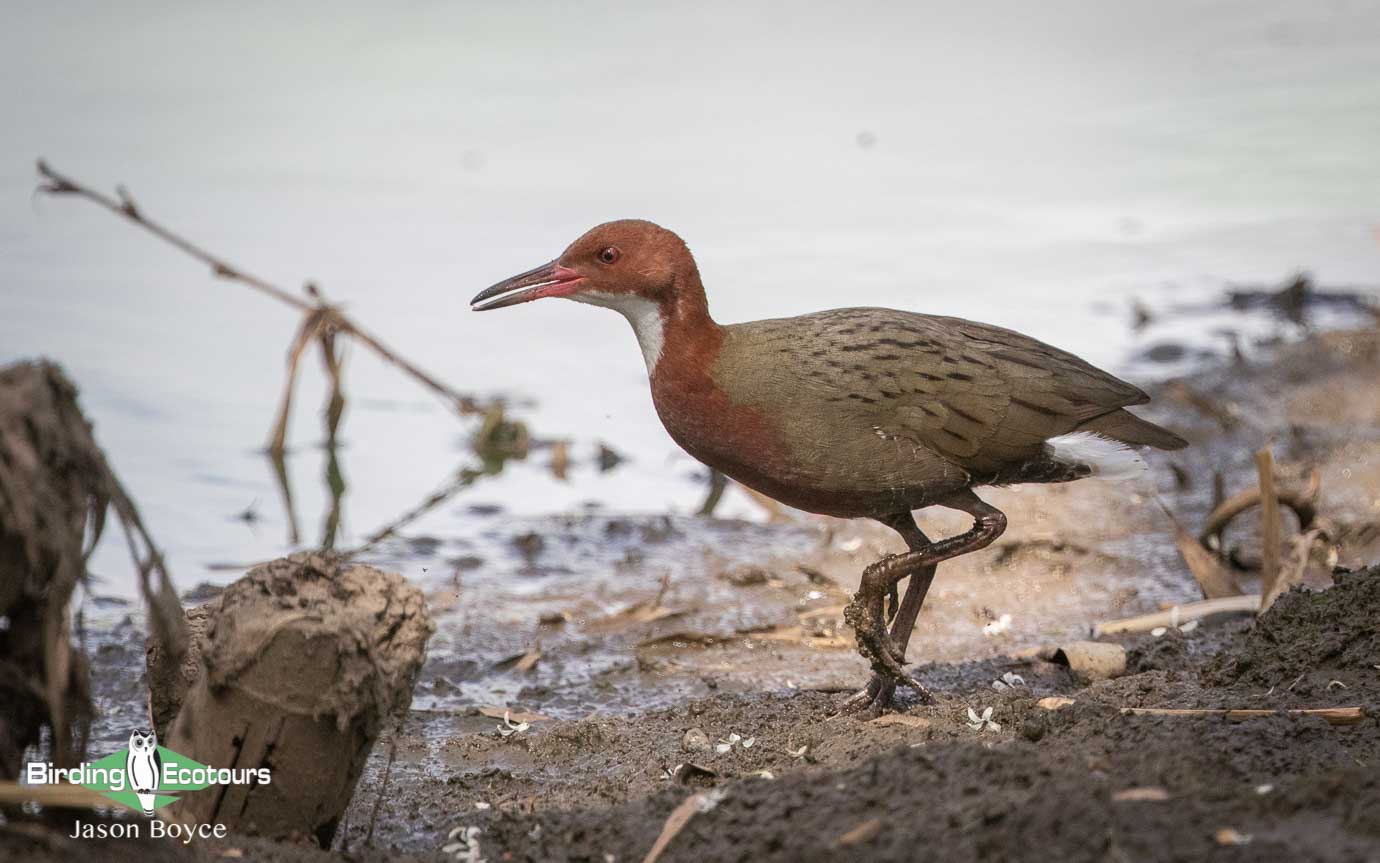 We will have two full days to search for the very special birds this area has to offer. Our main targets, of course, are the sought-after Madagascan Pochard, Madagascan Serpent Eagle, Red Owl, and Slender-billed Flufftail, and there is an excellent chance that during these two days we will be able to lay eyes on all – or most – of them. 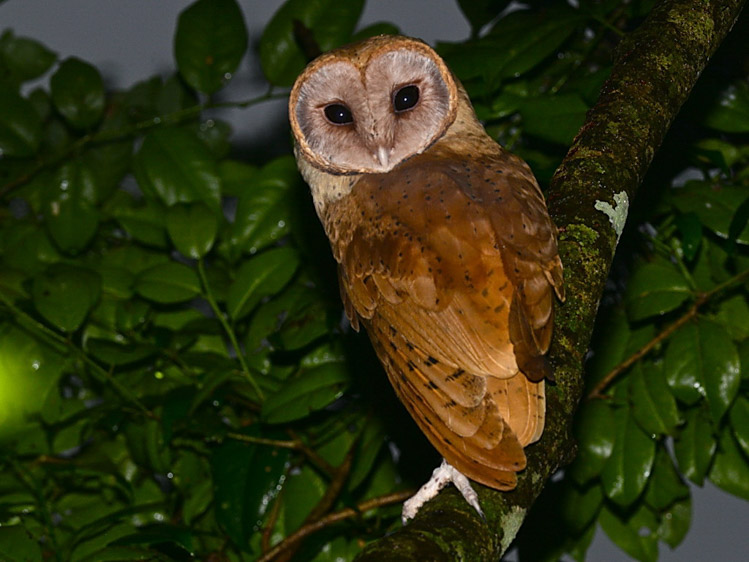 The rare Red Owl will hopefully be found on our night-time excursions.

Today we start our return voyage, driving back west for an overnight stop in Antsohihy, birding en route. We will stop for a picnic lunch.

Today we will transfer from Antsohihy to Mahajanga. On the way we’ll have lunch in Ankarafantsika National Park, where 129 species of birds have been recorded, more than half of them endemic to Madagascar. We hope to be able to encounter a number of them during our lunch stop, perhaps even the Critically Endangered (IUCN) Madagascan Fish Eagle.

In the morning we’ll bird the mangroves at the Betsiboka Delta for rare species such as Malagasy Sacred Ibis and Bernier’s Teal, along with a host of tropical shorebirds, terns, and more. Then we’ll take a flight back to Antananarivo.

Today either your international flight will leave for home or you will fly to Grand Comoro for our trip to the Comoro Islands and Mayotte.

Please note that the detailed itinerary below cannot be guaranteed as it is only a rough guide and can be changed (usually slightly) due to factors such as availability of accommodation, updated information on the state of accommodation, roads, or birding sites, the discretion of the guides and other factors. 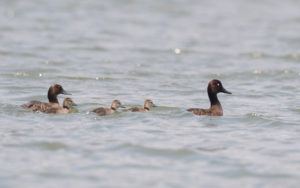 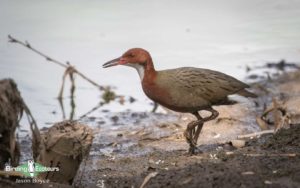 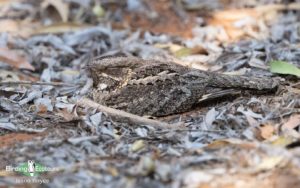 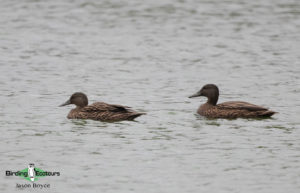 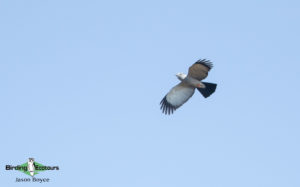 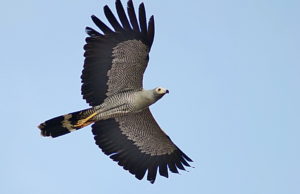 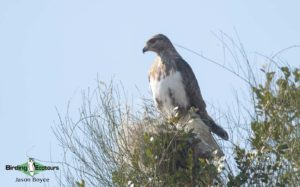 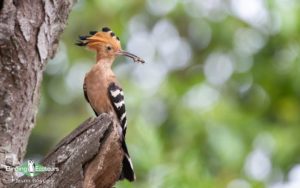 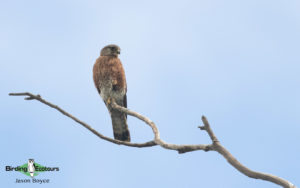 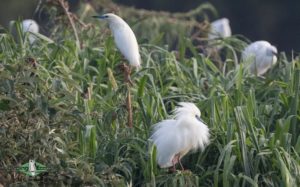 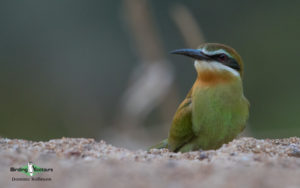 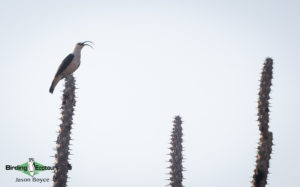 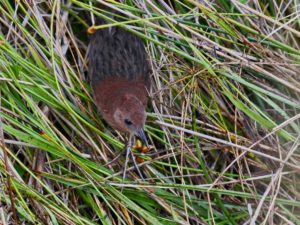 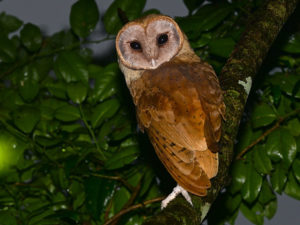 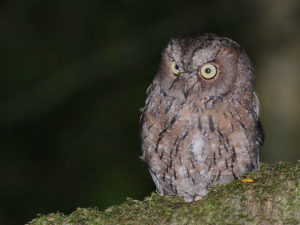 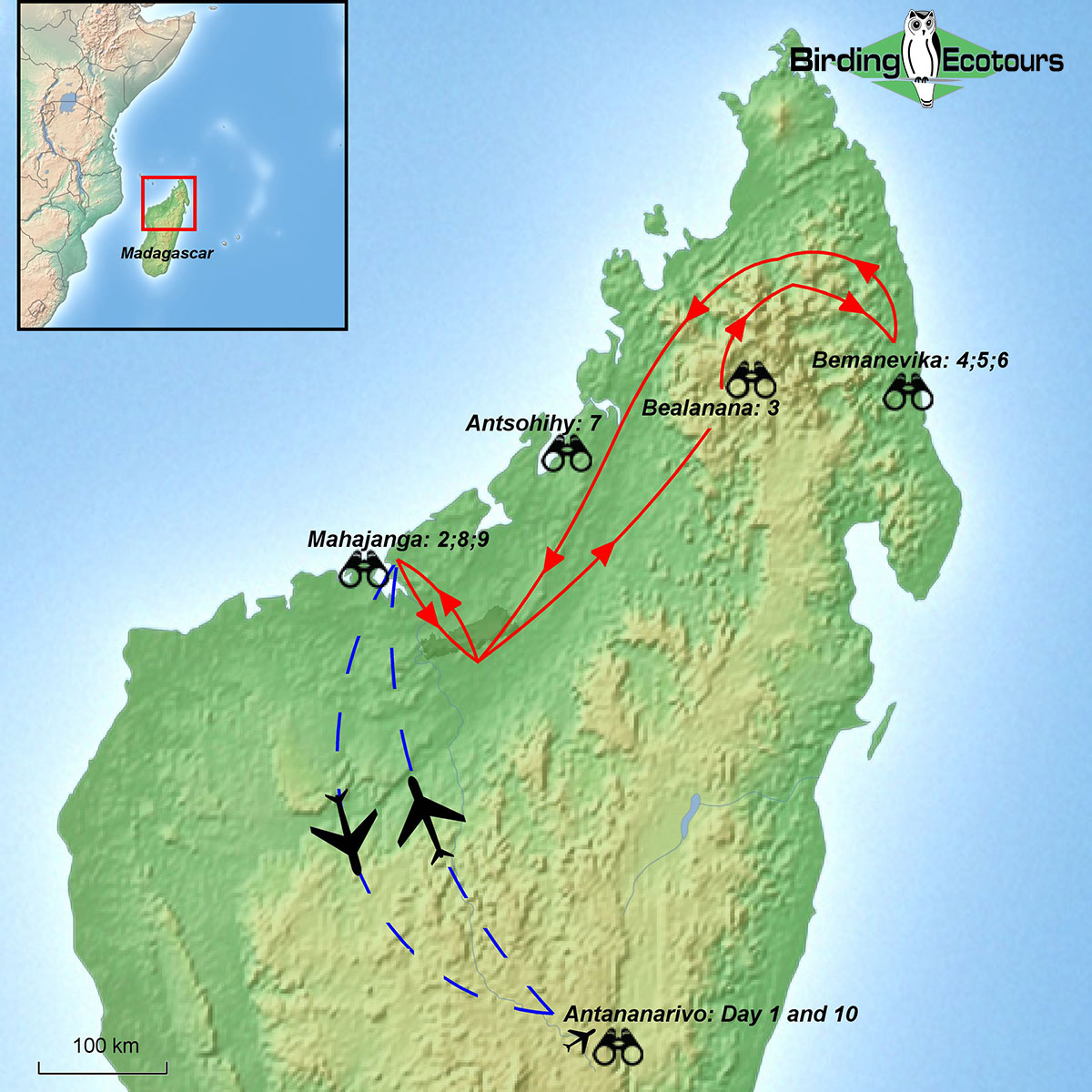