Ecuadorian Amazon | All our birding tours

Andy Walker outlines some of the best moments from his 2019 Amazonian birding adventure in Ecuador.

After spending an awesome time birding in northern Ecuador (read about it here) and southern Ecuador (read about it here) it was time for a quick trip into the famed Ecuadorian Amazon in eastern Ecuador. Thanks to some excellent information from our South American experts Eduardo Ormaeche and Galo Real, a plan was put in place and in no time at all I was based at the famous Gareno Lodge and was birding in the Amazon rainforest.

The birds I had seen already in Ecuador were fantastic and I really could not complain with what I had seen, but there were a few mega targets possible in the Amazon, including one world bird I was extremely keen to try and see… so let us dive right in!

Harpy Eagle, Harpia harpyja – One of the most spectacular birds in the world and an absolutely massive bird of prey. This one has been on my bucket list forever and it was a dream come true to get an opportunity to look for one. They are restricted to huge patches of mature forests sporadically distributed from southern Mexico through Central America and down through South America to northeast Argentina and are considered rare throughout their range (and considered Near Threatened by BirdLife International). I hiked quite some way into the pristine forest to the nest for this observation. It was not straightforward, but it was well worth the effort. Though the juvenile is nowhere near as spectacular as the adult, the size of this bird was still staggering with incredibly huge and powerful feet, built for plucking monkeys out of the treetops! Definitely one of my favorite birding moments so far! 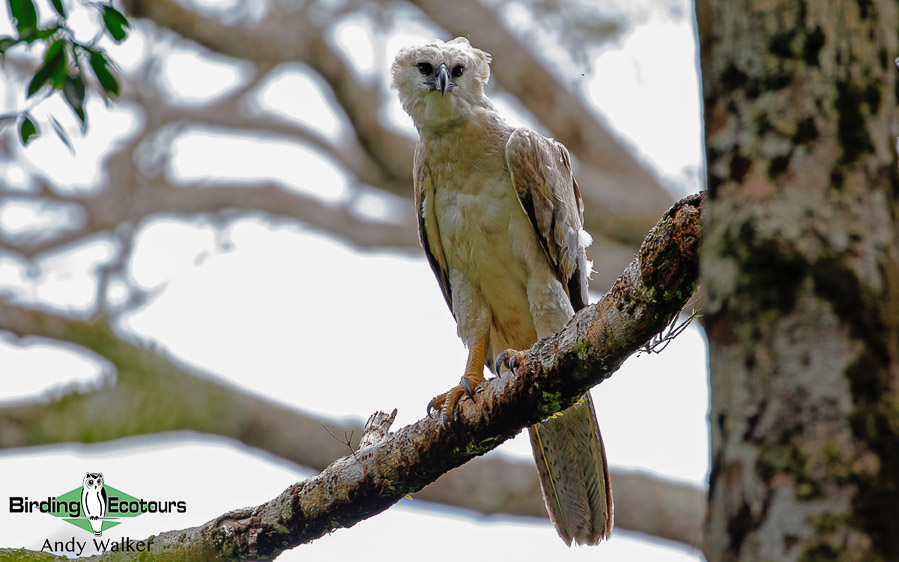 This juvenile Harpy Eagle was sat near its nest.

Rufous Potoo, Nyctibius bracteatus – A rarely observed nocturnal bird of lowland rainforest distributed sparsely across Amazonia. A small potoo which reminded me more of one of the Asian frogmouths (something like a Sri Lanka Frogmouth!) than other potoos I’ve seen. Interestingly, this species mimics a blowing leaf while roosting by swaying back and forth, it was amusing to be able to watch this behavior. The area was also full of Common Potoos and in the evenings the air was full of the strange sounds of them calling. The huge Great Potoo was also observed. 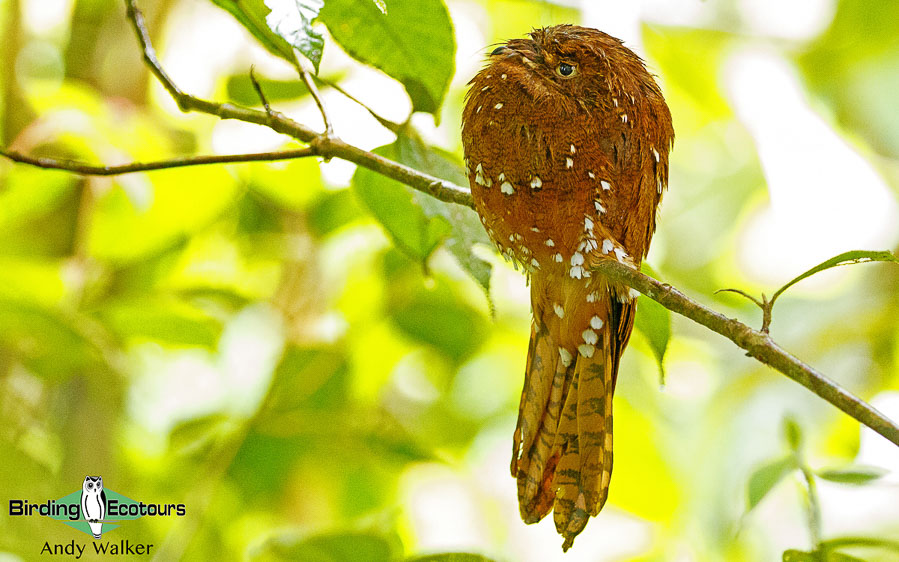 Hoatzin, Opisthocomus hoazin – An ancient bird found around lake edges and slow-moving streams, principally in the Amazon and Orinoco River basins. They have a unique and instantly recognizable appearance with a long orange crest and are often found clumsily moving around waterside vegetation. The newly hatched birds are famous for having claws on their thumb and first fingers, enabling them to dexterously climb tree branches until its wings are strong enough for sustained flight. The claws disappear by the time the bird reached adulthood. I took a small boat trip onto a small pond to get amazing and close views of this great bird. 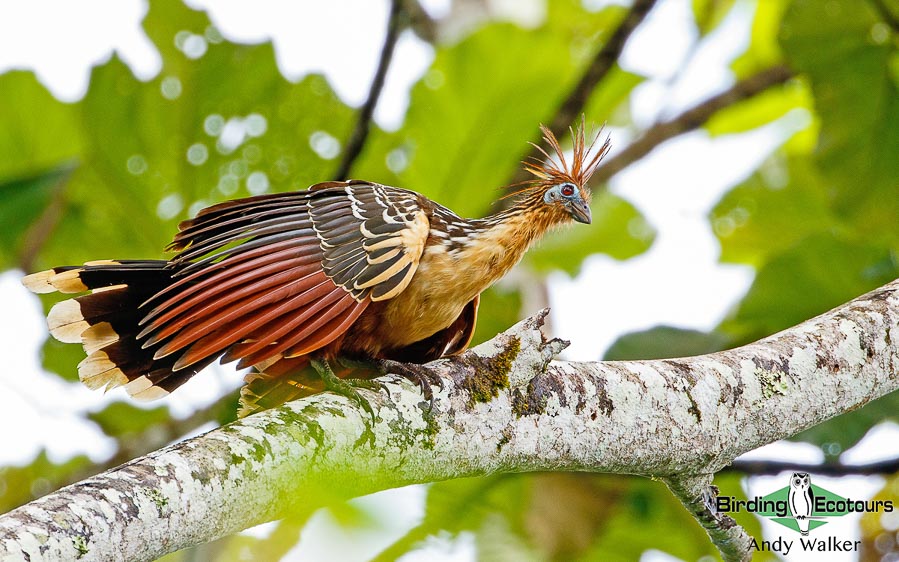 The Hoatzin (Opisthocomiformes) is one of the most ancient (approximately 64 million years old) living bird lineages!

Paradise Tanager, Tangara chilensis – A simply stunning tanager of the Amazonian lowlands where it is quite common within its range. It has electric colors with a bright green head which contrasts with a black, blue and red body. Definitely one of the most shockingly colorful birds in the Neotropics. It moves quickly through the canopy of humid forests, often traveling in mixed-species flocks. Other tanagers here include Opal-rumped Tanager, Opal-crowned Tanager, Bay-headed Tanager, White-shouldered Tanager, Masked Crimson Tanager, Silver-beaked Tanager, Turquoise Tanager, Yellow-bellied Tanager, Green-and-gold Tanager, Yellow-backed Tanager, Magpie Tanager, and Fulvous-crested Tanager. 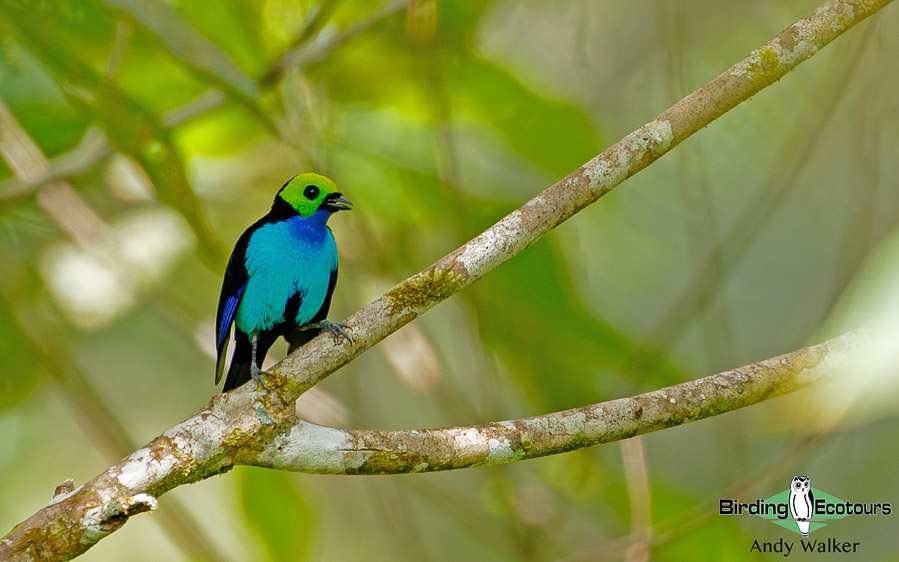 A shockingly colorful tanager even by tanager standards – the gorgeous Paradise Tanager. 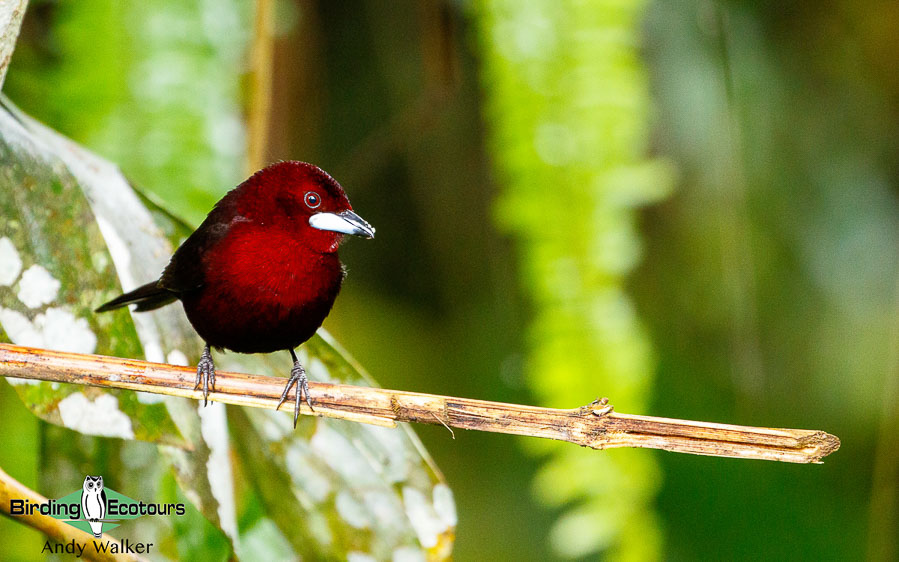 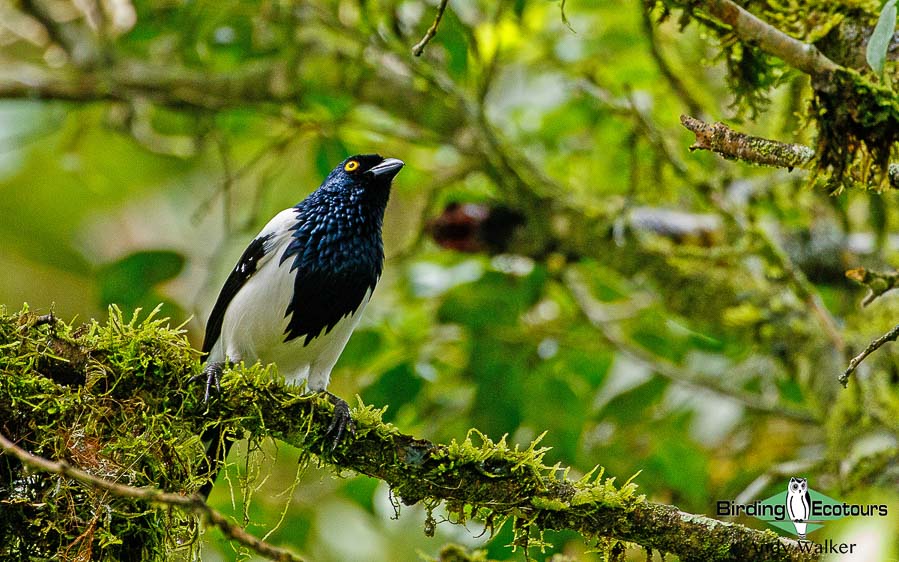 Red-bellied Macaw, Orthopsittaca manilatus – A small macaw, found in lowland rainforest across northern South America. It can often be found in swampy palm-dominated areas where it uses the palms for nesting. I enjoyed watching several species of parrots while I was birding in the Amazon, such as Southern Mealy Amazon, Black-headed Parrot, Blue-headed Parrot, Cobalt-winged Parakeet, White-eyed Parakeet, and Blue-winged Parrotlet. 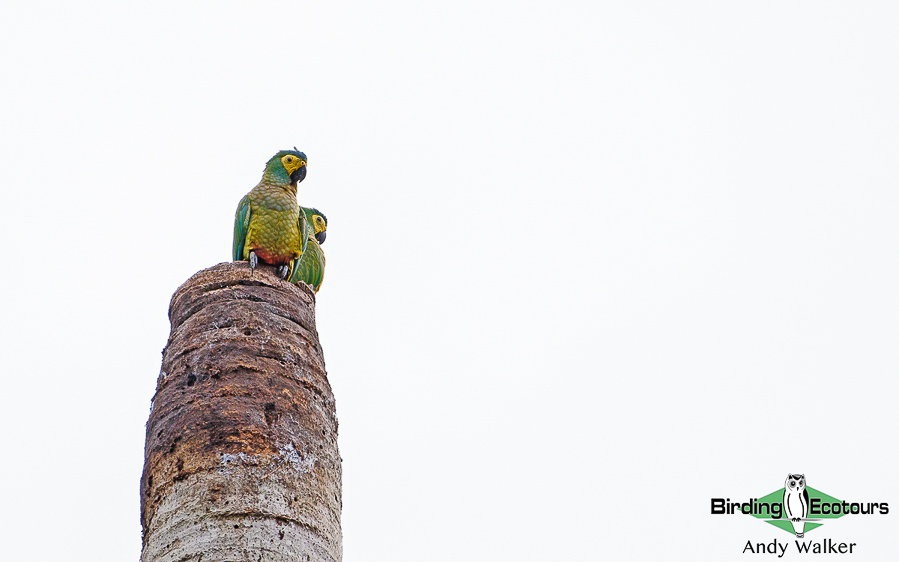 It was great to see nesting Red-bellied Macaws along the roadside in the Amazon. 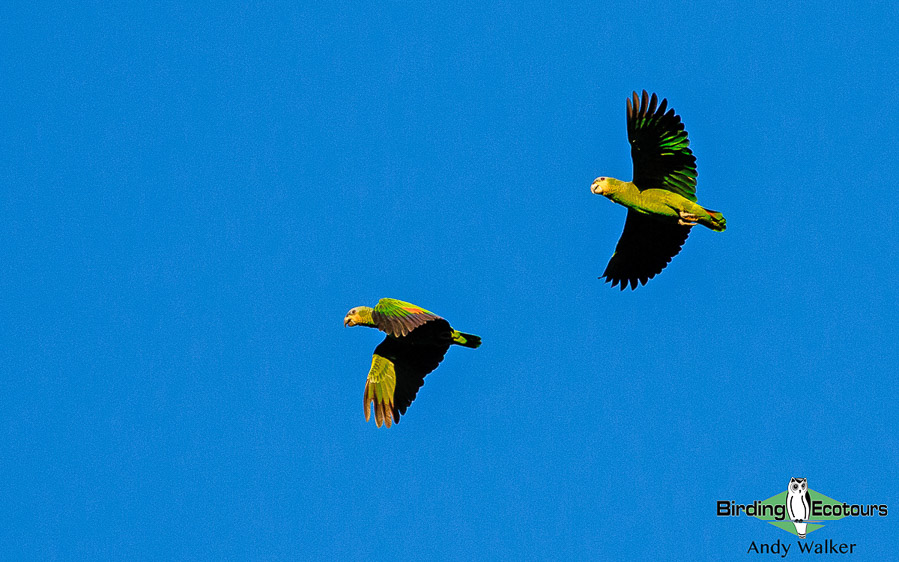 White-eared Jacamar, Galbalcyrhynchus leucotis – I found a flock of these on the roadside in the Amazon. The light was appalling at the time but a great bird with a huge bill and very reminiscent of an Asian kingfisher! The final jacamar of my trip and one of the nicest. 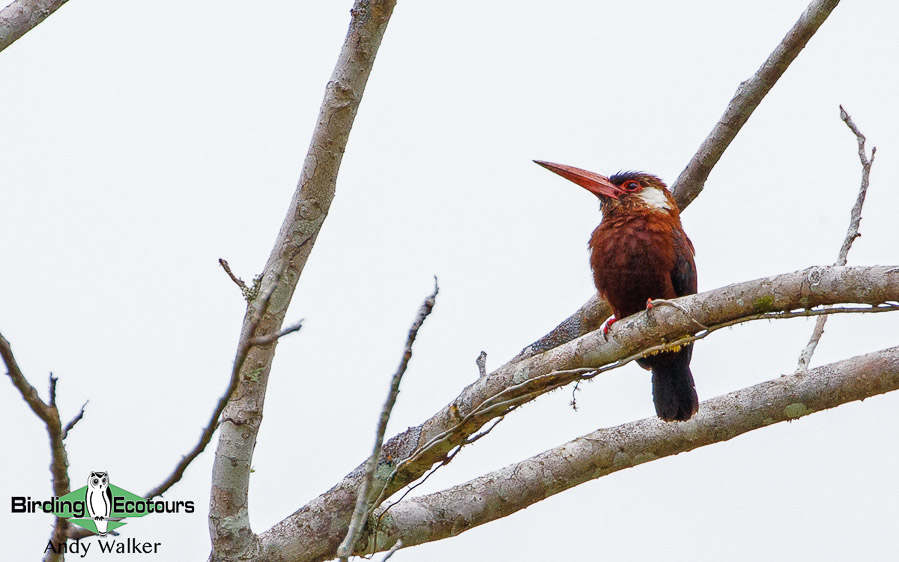 A rather chunky and thickset jacamar, White-eared Jacamar.

The above is just a small snapshot of some of the many great birds I found in the Amazon, there were so many others that I did not manage to grab record shots of (I had great views of Fiery Topaz for example – a stunning hummingbird, but it was too quick for me to grab a shot!), and yet another reason to go back to this amazing area. 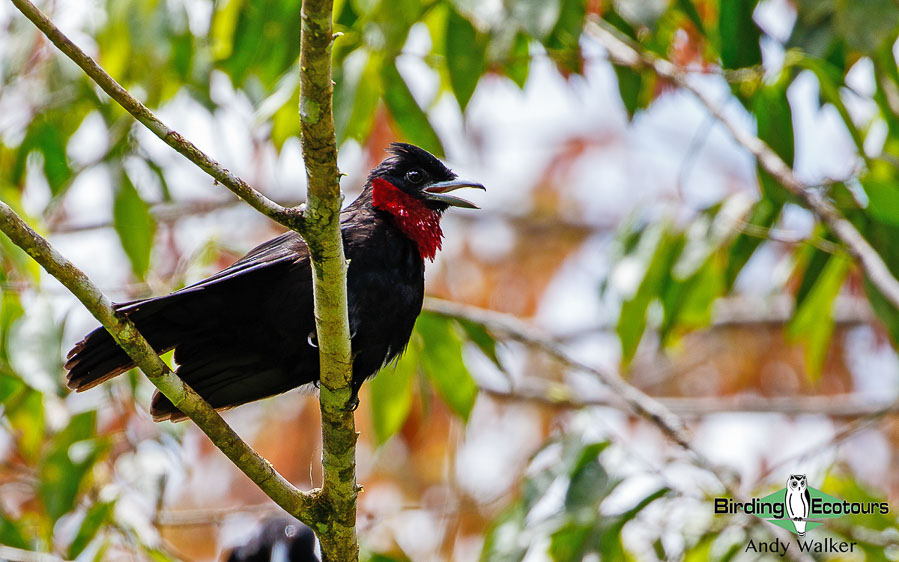 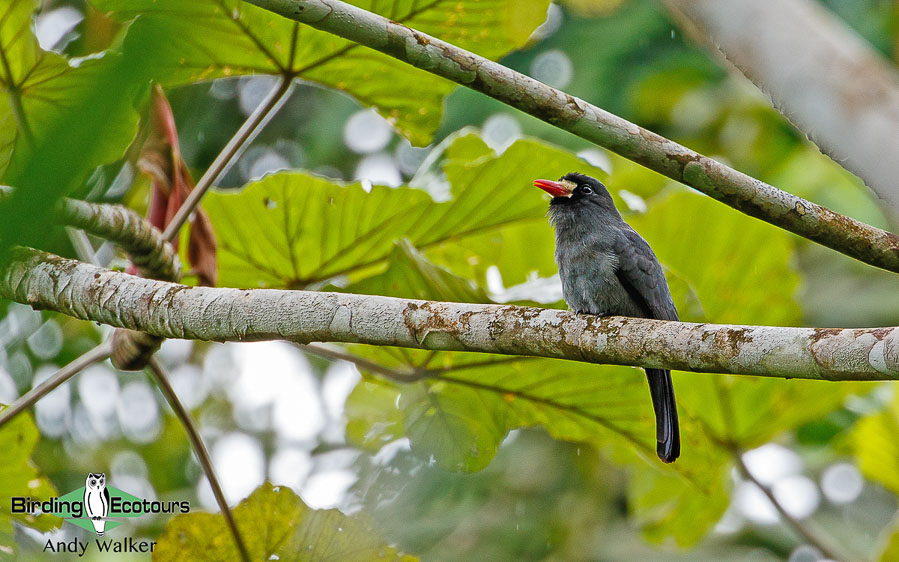 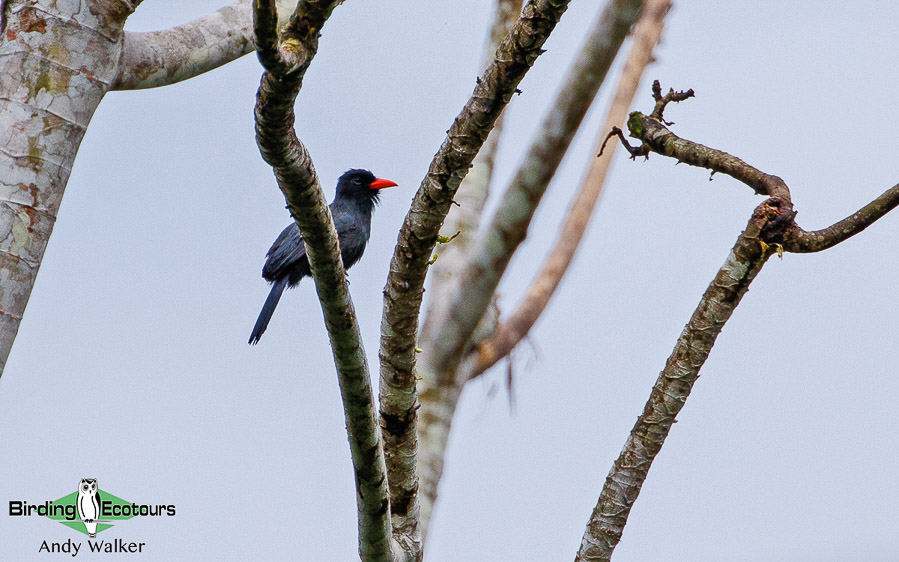 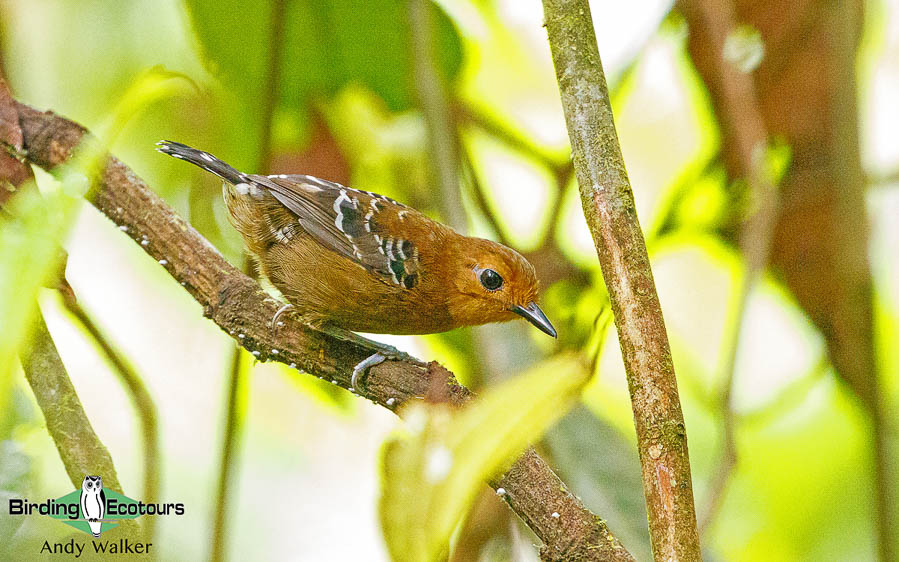 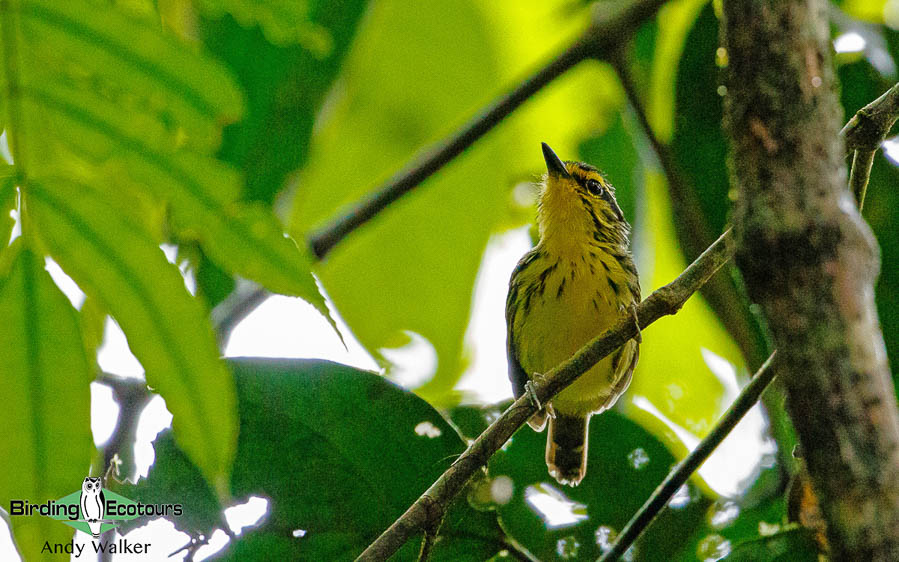 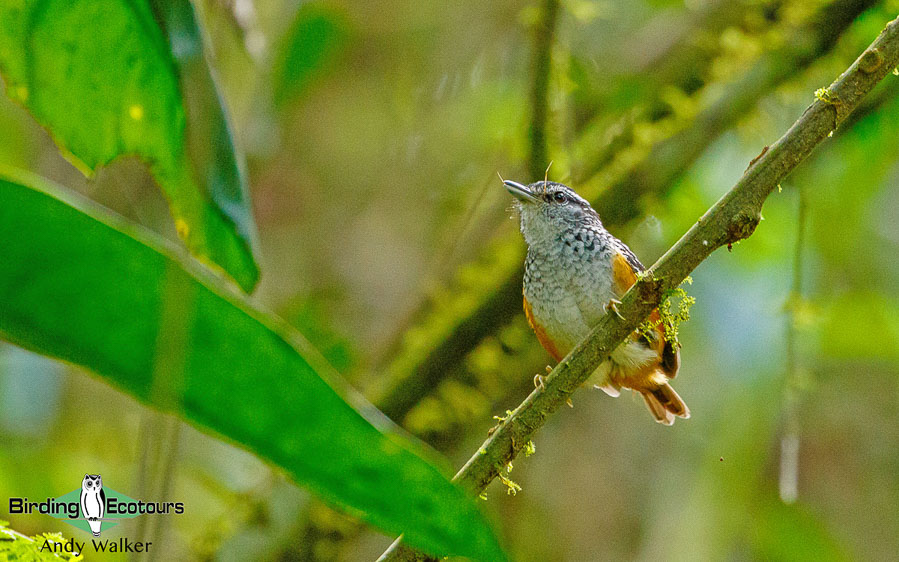 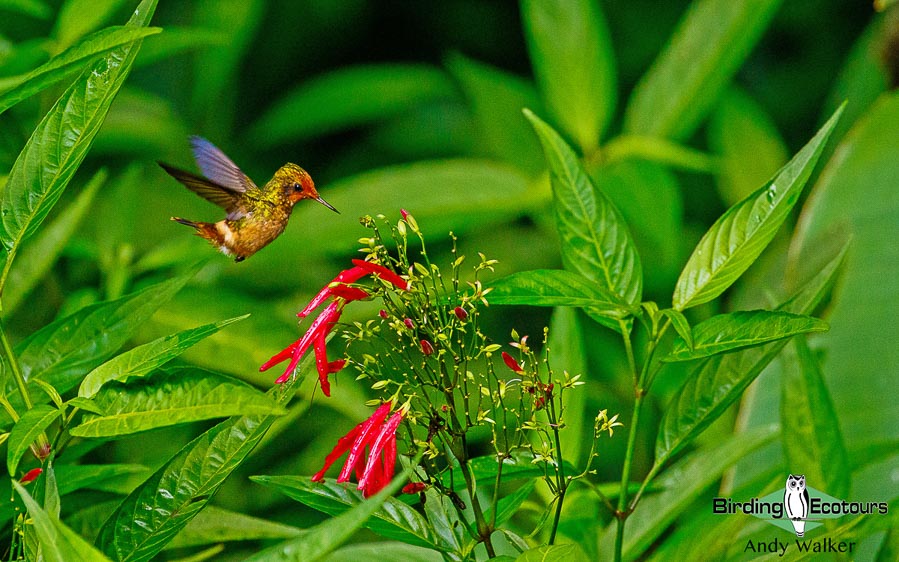