The Republic of Indonesia (“Indonesia” hereafter) is a vast and sprawling country in Southeast Asia consisting of over 17,500 islands, with some of the larger islands including Sumatra, Java, Borneo (the state of Kalimantan), Sulawesi, and New Guinea (the states of Papua and West Papua). Java is the most populous island with over half of the country’s 267 million people residing there. It is unsurprising to learn that Jakarta, on Java, is the capital city of Indonesia, though this is scheduled to change to a new mega-city in Kalimantan, Borneo. Indonesia has the 4th highest population of any nation in the world.

Indonesia is bordered on land by Papua New Guinea in the east (on the island of New Guinea), East Timor in the southeast (adjacent to West Timor), and by East Malaysia (Sabah and Sarawak in Malaysian Borneo) in the north. Other neighboring countries include Singapore, Vietnam, the Philippines, Australia, Palau (part of Micronesia), and the Andaman and Nicobar Islands (India). Indonesia has had an interesting past with trade between China and the Indian Subcontinent ongoing since around the 7th century AD. The Dutch have been the major colonial power in the country, with Indonesia gaining independence in 1949.

Indonesia’s size (it is 3,181 miles/5,120 kilometers from east to west, and 1,094 miles/1,760 kilometers from north to south), its tropical climate (Indonesia straddles the equator), and its geography results in the country supporting one of the world’s highest levels of biodiversity. The country is split in two by the invisible “Wallace Line” with western parts of Indonesia having a fauna of Asian origin and eastern parts of Indonesia having a fauna of Australian origin. The area where these two biogeographical zones merge is known as Wallacea, where there is a limited amount of mixing of fauna from both regions.

Following International Ornithological Congress (IOC) taxonomy, v10.2 (October 2020), the Indonesia bird list is considered to stand at a staggering 1,779 bird species, with an equally impressive total of 459 endemic species. As our knowledge of taxonomy and how to define a species alters, this total is likely to rise substantially, making Indonesia one of the must-visit destinations for bird watchers. It is however a major concern that there are 155 globally threatened species in Indonesia, many falling foul of the illegal pet trade, such as Bali Myna, Yellow-crested Cockatoo, and Javan Green Magpie, other globally threatened species include Flores Hawk-Eagle, Flores Scops Owl, Sumatran Ground Cuckoo, and Banggai Crow. This number is also unfortunately likely to increase. Bird conservation is increasingly crucial in Indonesia where bird-keeping has been an intrinsic part of life for centuries, though never quite on current levels as this tradition has developed into a large-scale business. According to BirdLife International (and local BirdLife Partner: Burung Indonesia) there are 38 Endemic Bird Areas (EBAs), and 225 Important Bird Areas (IBAs) in Indonesia, several of these fall within natural reserves, nature reserves, and national parks, however many are currently unprotected, such as important mangrove forests.

We currently have three fascinating tours (outlined below in chronological order) for those people interested in going birding in Indonesia, though watch this space as we will be adding several further amazing tours very soon. We are working with some excellent local guides to help maximize the many difficult birds seen on our tours:

This thorough tour of the Lesser Sunda region starts and ends in Denpasar, Bali and covers the islands of Sumba, Rote, West Timor, Alor, Flores, and Komodo Islands. On this birding adventure we will seek out many endemic birds, such as Sumba Buttonquail, Sumba Hornbill, Little Sumba Hawk-Owl, Rote Boobook, Rote Myzomela, Timor Friarbird, Black-banded Flycatcher, Alor Myzomela, Flores Hawk-Eagle, Flores Crow, Flores Monarch, Elegant Pitta, Ornate Pitta, and Glittering Kingfisher. The non-avian highlights are sure to be Komodo Dragons! There are several species currently undescribed and new to science along our route and we will look for those too, such as ‘Mt Mutis Parrotfinch’.

This incredible tour looks for many spectacular endemic birds of Sulawesi and Halmahera (North Moluccas), with some of the best including (Wallace’s) Standardwing – a unique bird-of-paradise that we will look for at its display lek, Maleo, Hylocitrea (monotypic endemic family), Purple-bearded Bee-eater, Ivory-breasted Pitta, North Moluccan Pitta, Sulawesi Pitta, Green-backed Kingfisher, Scaly-breasted Kingfisher, Lilac Kingfisher, Blue-and-white Kingfisher, Malia, Geomalia, Knobbed Hornbill, Ashy Woodpecker, Satanic Nightjar, Halmahera Boobook, Moluccan Owlet-nightjar, and a wide-range of parrots, fruit doves, and so many more. Join us as we bird watch in this endemic-filled region of Indonesia.

Our new Indonesian tours will be covering Sumatra and West Java, Bali and East Java, Biak, Numfor, and Kofiau, and Papua Province for starters. On these tours we will be focusing on seeing the endemic birds of each region, a thrilling prospect! 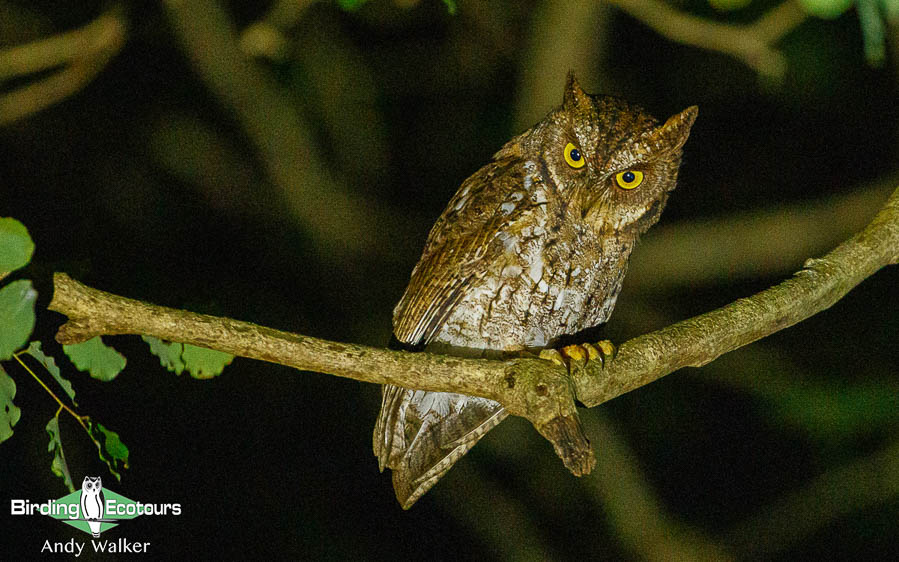 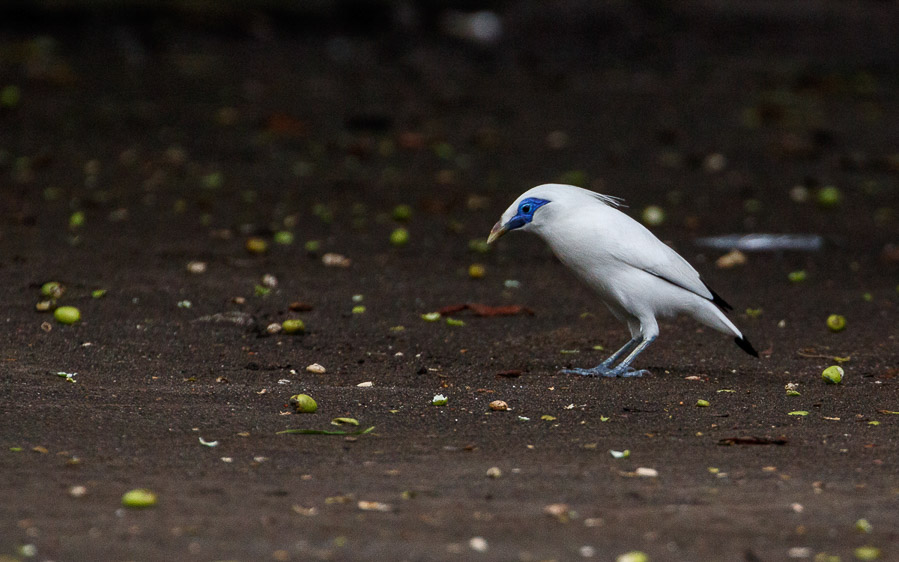 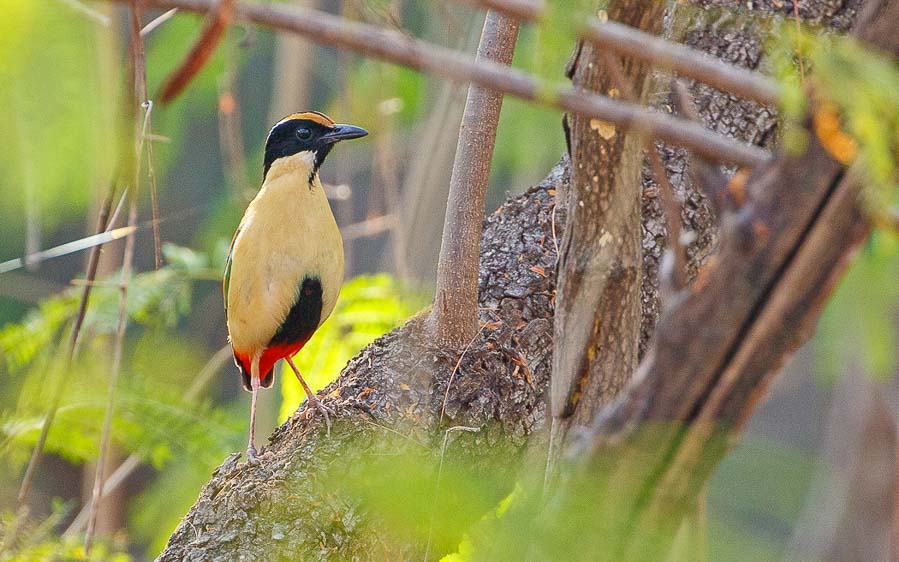 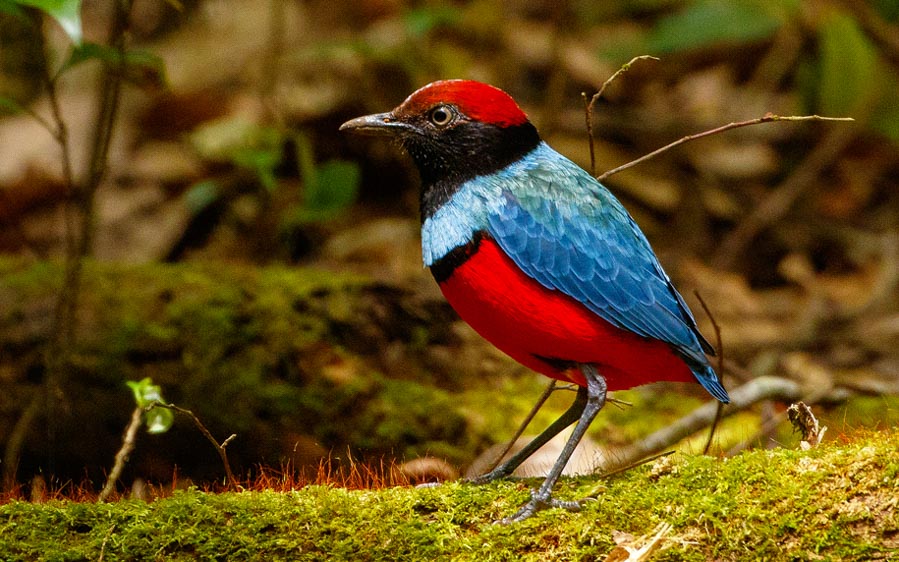 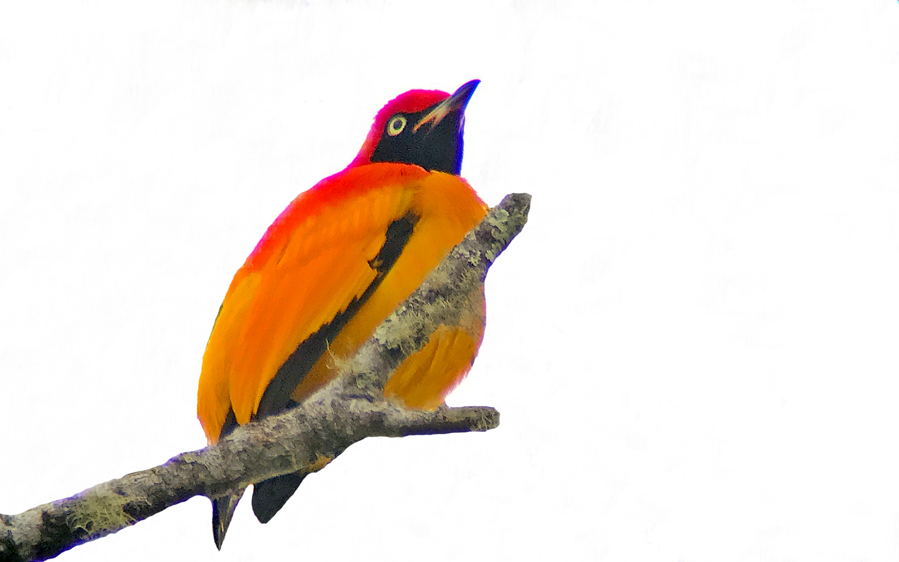 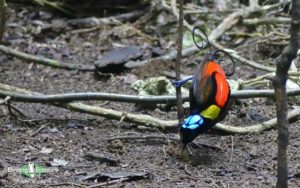 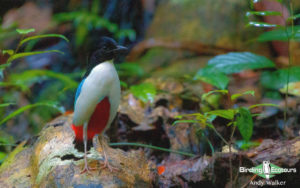 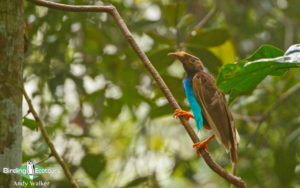 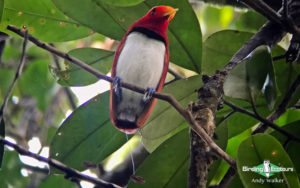 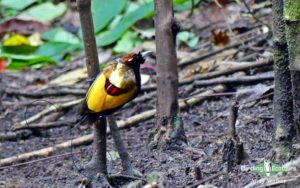 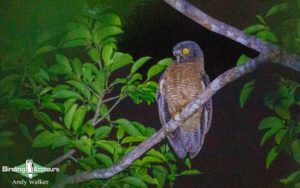 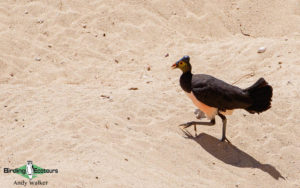 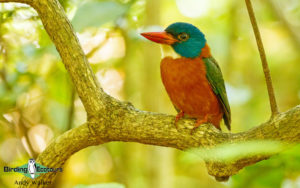 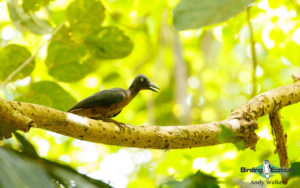 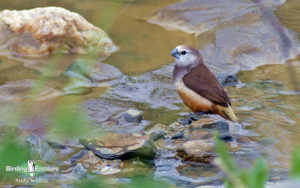 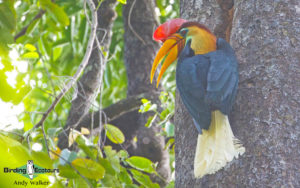 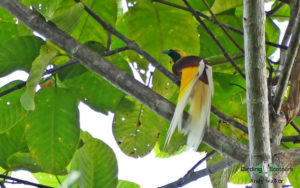 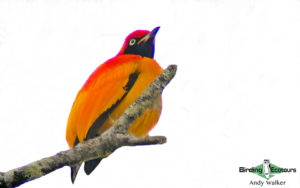 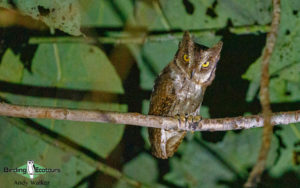 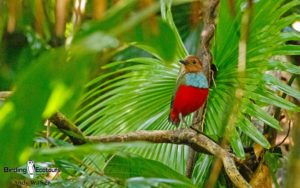 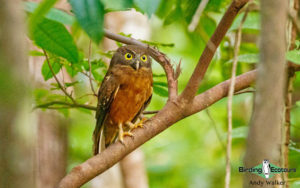 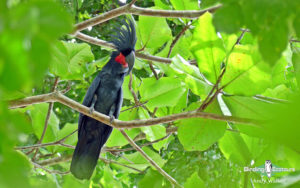 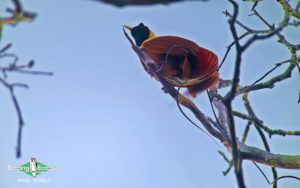 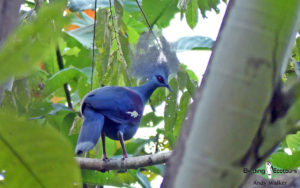 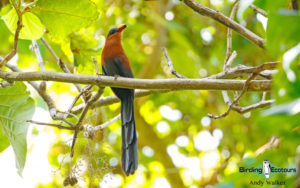 Testimonials from our Indonesia birding tours

Andy walker is one of the best, good-natured birding guides who have served me in 42 guided tours. He makes
certain that everyone in the group has seen each bird and keeps at it until that happens. His use of birding time on the
tours half of all species on this tour and the two Indonesia tours I took with Andy immediately before this one was
excellent and I was able to meet my goals of seeing the last three bird families of all 248 (eBird/Clements list) and to
see half of all bird species. Andy has my highest recommendation to other birders – he will serve you well!

For anyone interested in the extraordinary diversity of Indonesian birds, this tour provides a wonderful opportunity to see the many endemic species on six of the islands of the Lesser Sundas. Thorough research and planning by Birding Ecotours will enable participants to see many, if not all of the endemic birds of each island and at a relatively relaxed pace.

David and Barbara - On the Lesser Sunda Islands
We can run any of our tours privately at any time and can also arrange custom itineraries!
CONTACT US